In September, Bruce Steubing, principal and vice president of Benchmark Resources, was selected to speak at the California Construction and Industrial Materials Association about “Obtaining Permits and Approvals with Entrenched Project Opposition.” According to Benchmark’s website, Steubing was selected to speak to the crowd about “how to navigate the [California Environmental Quality Act] process when faced with entrenched opposition.” 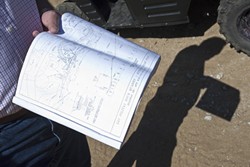 An EIR is usually considered to be a purely objective review of a project based on how it will impact the environment. Areas of concern include habitat loss, water quality, and traffic congestion in the surrounding area.

The Benchmark selection has raised eyebrows among locals already wary of how their lives would be changed by the proposed project.

“Everybody that sees that posting on their website says, ‘Are you kidding?’” Santa Margarita resident Roy Reeves told New Times.

“Benchmark Resources is committed to long-term relationships with our clients that result from a history of successes in resolving issues and obtaining permits and approvals,” the company’s website states. “Land use, mineral development, and environmental conservation are increasingly complicated; we work as a strategic partner together with our agency and industry clients to solve technical, regulatory, and political issues.”

Though such language might seem mild, the company, with an emphasis in mining projects headed by former industry professionals, has some locals worried the county picked a PR agent for Las Pilitas Quarry rather than an objective environmental consultant.

Ordinarily, such a selection might have gone overlooked. But debate over Las Pilitas has led opponents to paint it as a project being trucked through the approval process, relying on clever rhetoric over sound planning.

“Of course everyone’s alarmed,” said one Santa Margarita resident. “Because [we’re] hoping for an unbiased EIR.”

Proposed by Las Pilitas Resources, LLC, and agent Ken Johnston, the quarry project would put 30 years of mining—half a million tons of granite per year—and an asphalt recycling plant on about 60 acres of rural residential land a little more than two miles outside the small town of Santa Margarita.

In March 2010, before the project had really even entered the county planning fray, county officials were asking for reinterpretations of existing land ordinances, specifically ones that could arguably have made it easier to place an industrial project on rural land. Originally proposing a mining project mixed with asphalt manufacturing, Las Pilitas Quarry applicants and county planners unsuccessfully asked for tweaks that would have allowed asphalt manufacturing on rural land by changing the ordinance from reading that “the” raw manufacturing material must be extracted on site to “all” the material has to be manufactured onsite. It was a small change, but one that could have vastly impacted Las Pilitas and similar proposals. Amid heavy public opposition, the proposal failed to garner a majority vote from the county Planning Commission and Board of Supervisors.

County supervisors will soon be asked to approve the contract with Benchmark Resources, a routine bureaucratic nod that will allow the environmental review to begin. Benchmark was one of three consultants that made it to the final round of bidding on the Las Pilitas EIR.

A Benchmark representative didn’t return a request for comment.

According to County Environmental Resource Specialist Jeff Oliveira, the cost of Las Pilitas’ EIR is more expensive than most others that typically come before the county. First of all, it’s a mining project and therefore “environmentally complicated.” Secondly, approving the asphalt recycling portion of the project will require a waiver of county ordinances regarding recycling.

“That portion of the ordinance was written a long time ago when recycling was just cans and bottles, mostly,” Oliveira said.

Las Pilitas Resources in September applied for a waiver to the county code, arguing that a recycling facility should be permitted in rural zoning because the area includes an “extractive overlay, meaning it is zoned for mining.”

Johnston, the applicant, said the proposed location fits the surrounding uses, and given the geology of the area, it will allow the company to extract high-quality granite.

“One of the adjoining property owners is the Hanson [Aggregates] quarry,” he said. “So we’re in the same kind of cluster of development and it doesn’t need to be on the industrial-zoned land.”

Asked about Benchmark, Johnston said, “I’ve never seen or heard that they’re PR—I looked at them as an EIR consultant.”

According to the Notice of Preparation for the draft EIR, Las Pilitas “may have a significant effect on the environment,” which will include potentially significant impacts to aesthetics and air quality, among others. Also according to that document, the project would generate 208 truck trips per day, mostly to haul material from the site.

“I think there’s real difficulties they’re going to have down the road,” Santa Margarita resident Reeves said of the document, which he believes “is pretty lame.”