Looks like SLO Brew wants to go out with a bang this school year. How else do you explain a week with ’80s ska heroes The English Beat, ’80s punk icons Suicidal Tendencies, and rap diva Lil’ Kim all in one week?

But let’s start at the beginning. On Thursday, June 7, the club is host to Blitzen Trapper (7 p.m.; all ages; $13 presale or $15 at the door), with opening act Sydney Wayser. If you like jangly folk rock, you’ll dig Blitzen Trapper—go to slobrewingco.com and check out their inventive videos! Wayser is a melancholic singer-songwriter with a French pop and an American mom. Think a less fierce Fiona Apple or a female Leonard Cohen.

One of my all-time favorite bands—The English Beat—returns for another night of  ’80s anthems such as “Mirror in the Bathroom,” “Hands Off She’s Mine,” “Twist and Shout,” and “Can’t Get Used to Losing You.” Still fronted by Dave Wakling, the group sounds eerily similar to the way they did in the early ’80s, and in recent years they’ve been writing great new material. Don’t miss this show on Friday, June 8 (7 p.m.; 21-and-older; $21 presale or $23 at the door), with SLO Town’s old horn-driven ska act The Action League opening.

Nineties punk act Face to Face takes to the stage on Saturday, June 9 (7 p.m.; all ages; $20 presale or $22 at the door). If you remember the flick Tank Girl, maybe you’ll remember this band’s hit “Disconnected,” which also appeared in the film National Lampoon’s Senior Trip.

On Sunday, June 10, punk icons Suicidal Tendencies will deliver an evening of furious hardcore thrash (8 p.m.; 21-and-older; $30 presale or $33 at the door). In its early years, this band had such a reputation for mayhem that they were banned from playing Los Angeles and no record label would touch them. Banned from Los Angeles? That’s like Jeffrey Dahmer being banned from Hell for being too evil! Nobody thrashes like ST!

Finally, get your tickets now if you want to catch Lil’ Kim at SLO Brew on Thursday, June 14 (8 p.m.; 21-and-older; $32 presale or $35 at the door). She’s riding high on two new singles—“If You Love Me” and “Keys to the City”—not to mention her book, The Price of Loyalty. Come see why she’s called the Queen Bee of rap. Or just come because her boobs will probably be all over the damn place like usual. 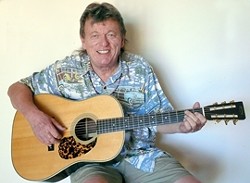 Has it been three whole years since Steve Key’s Songwriters at Play added Santa Margarita’s The Porch to its weekly schedule of singer-songwriter showcases? Yes, it has, and who better to headline on Thursday, June 7, than Santa Margarita’s own most famous musical son, Don Lampson?

“It was originally Don’s idea to do the showcase at the Porch,” Key said. “I was skeptical at first—Thursdays are Farmers Market nights in SLO, so how could we get a crowd in Margarita? But here we are three years later, still putting on shows every Thursday, still getting people to watch. Some people come every week—for example, Marilyn Walker, who brings her neighbor Eutha and sits right up front. Porch owners Sam and Carol Samano are very supportive, and it’s a pleasure to work with them every week. I’ve already booked four guest performers for June 7: Kiki Ebsen up from L.A., Rob Kimball, Spanky Baldwin, and Diane Arkenstone. I’ll probably kick it off with a short set, too.”

Lampson, who’s my kinda old cruster, started writing songs and making records at 15, playing with Ernie Freeman. During 50 years of making music, he’s shared the stage with Hoyt Axton, T-Bone Walker, Alice Cooper, Dave Mason, and J.J. Cale, among others. The show starts at 6:30 p.m. (all ages; pass the hat).

On Sunday, June 10, Jean Butterfield headlines the showcase at Sculpterra (1 p.m.; all ages; pass the hat). Based in the Yosemite-area town of Oakhurst, Butterfield calls her style “acoustic folkgrass,” with original songs about “angels, farmers, loggers, and hobos.” Fans of the late Kate Wolf will find something to like here, and her CD Brothers in Time covers Wolf’s classics “Give Yourself to Love” and “Across the Great Divide.”

On Tuesday, June 12, Drew Nelson headlines the showcase at Kreuzberg (6:30 p.m.; all ages; pass the hat). Hailing from Michigan, Nelson is touring in support of Tilt-A-Whirl. He mixes Springsteen’s roots-rock sounds on his narrative songs about an eclectic cast of characters: “out of work war vets, forsaken lovers, migrant workers, and other directionless lost souls.” San Diego pop-rock act Oh Yea will also be featured.

Incredible 12-man vocal ensemble Chanticleer returns to the area as part of its current tour, “Mission Road,” which will see the acclaimed group performing six concerts in the historic California missions from Santa Barbara to San Francisco, including a visit to the SLO Mission on Friday, June 8, at 8 p.m. A small chamber ensemble of violin, cello, lute, and guitar will accompany most of this program, which is made doubly interesting because the group’s new program features recently discovered centuries-old music written in the New World during the period of Spanish colonization … unearthed by our very own Dr. Craig Russell, author of From Serra to Sancho (Oxford University Press), who has collaborated with Chanticleer on all of its Mexican Baroque projects. Dr. Russell spent countless hours photographing the archives in Mexico City, where much of the music of  the era is preserved. Tickets for this very special concert range from $20 to $44. Call 1-800-407-1400 or visit chanticleer.org/concerts.

The Jason Harnell Trio plays Steynberg Gallery on Friday, June 8, at 8 p.m. (tickets are $10; $7 for students). Harnell, a highly acclaimed West Coast drummer, has enlisted amazing local saxophonist Aaron Wolf and L.A.-based bassist Ryan McGillicuddy to create a trio he describes as “a ‘chordless’ modern jazz trio whose repertoire runs the gamut from familiar standards to dreamy cloud-watching soundscapes to flaming barn burners, all heightened by sharp listening and a unified sense of melody among the bandmates. The JH Trio is a uniquely beautiful, exciting sonic experience you won’t soon forget!”

The Royal Garden Swing Orchestra plays D’Anbino on Friday, June 8, from 8 to 10 p.m., presenting an evening of big-band music that sounds much bigger than their nine-member-strong orchestra. Hear everything from swing era to modern classics. Admission is $10 ($5 for record club).

Reggae act Souls of Love brings its socially conscious sounds to Frog and Peach on Friday, June 8, at 10 p.m. They take their name from a Marcus Garvey poem called “Wicked Dies”: There’s a plot for you and one for me,/ Out in God’s acre, that’s lying by;/ You needn’t think I cannot also see/ That the wicked shall most surely die. In the resurrection men shall rise—/ Not those, steeped in sin and lies,/ But the souls of love for good and truth/ Shall blossom forth in spiritual youth.

Word on the street is Gilles Apap & The Transylvanian Mountain Boys will play Castoro Cellars on Saturday, June 9, at 7 p.m. ($20; call 238-0725 or order online at castorocellars.com; bring a blanket or low back beach chair). Apap is a talented French violinist who plays Romani (Gypsy) music, swing, Irish music, and bluegrass music, as well as the masterpieces of classical music. Bon Temps will cater a $12 dinner.

I’ve caught the father-daughter duo Ranchers for Peach a couple of times now; they’re terrific songwriters, they’re great performers, and, best of all, they have a message worth listening to. Featuring Charles and Ray Duncan, they’ve dubbed their style “neo-hippie protest music”—filled with heartfelt harmonies over jangly guitar, harmonica, and melodica—and they might just change the world. Now they’re ready to release their first recorded music, a seven-song EP called Tell All the World, during a concert on Saturday, June 9, at 8 p.m. in Steynberg Gallery. To get an idea of their subject matter, a while back they released “Walking Around Black,” their response to the Trayvon Martin killing in Florida, which was recently selected by the editors of the venerable Sing Out! magazine to be featured in its upcoming issue and its companion compilation CD.

The JD Project will bring its soulful blend of rock, blues, and country to D’Anbino on Saturday, June 9, from 8 to 10 p.m. You’ll be dancing or at least bobbing your head to this one. Admission is $10 ($5 for record club). 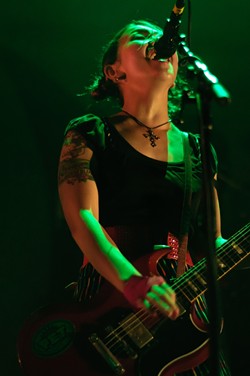 They’re huge in Japan! Yes, I’m talking about all-girl rock act Red Bacteria Vacuum, who, thanks to a glitch in their schedule, found themselves with an open date, and faster than you could say “Bonsai!” they booked the Z Club for Saturday, June 9. Featuring Ikumi (guitar-vocals), Kassan (bass-vocals), and Jasmine (drums-vocals), the band eventually relocated from Osaka to Tokyo, and in 2000 started distributing home recorded CD-Rs. They quickly caught fire and released Killer Dust and then Roller Coaster, then began touring the United States in 2006. Favorites at SXSW and having built a loyal following in the Bay Area, they mark their first foray into SLO County with the weekend’s show. Check out this fun-loving mischievous group!

Inner Faces plays Coalesce Bookstore and Garden Chapel on Sunday, June 10, from 1 to 3 p.m. ($10; 772-2880). This incredibly talented and diverse Central Coast string band, which formed more than 20 years ago, mixes jazz, rock, classical, and bluegrass into an engaging sound. With two CDs available—Beneath the Surface and Best Laid Plans—this group has plenty of material to choose from, plus they’re working on a third album!

On Sunday, June 10, internationally acclaimed Paraguayan harpist Ramón Romero will perform traditional and contemporary music from Latin America at 3 p.m. in SLO’s St. Stephens Episcopal Church. He carries on the centuries-old tradition of folk harp music, and he’ll be joined on some selections by harpists Aurora Denny and Carole Romero. A donation of $15 is suggested.

Bay Area-based indie pop band French Cassettes plays Frog and Peach on Monday, June 11, at 8 p.m. They took home first place in both the Hayward Battle of the Bands and Sacramento State Battle of the Bands, and they were one of four finalist in a nationwide Myspace battle of the bands, competing against thousands of other acts!

Wooter, which hails from Santa Cruz, wrote in “hopes that you will sing our praises in print and help us reach our ultimate goal of rocking the Frog and Peach like never before on what would otherwise be considered an ordinary Tuesday night.” I haven’t seen Wooster, but judging from their bluesy and funky sound I heard on an MP3, they sound like they can burn the mo-fo down. Check ’em out on Tuesday, June 12, at 10 p.m.

“Most of the songs on this record are about holding on to something, even if it means being left behind,” he said in press materials. “I’ve felt that way a lot in my life. Stubbornly grasping onto those memories and dreams can fill you with hope or fill you with madness. I think this album has equal parts of both, and I think most of us fight that battle at one point or another in our lives.”

If it seems like déjà vu all over again, it is. Peter Case, who played Monday, June 4, at Steynberg Gallery, returns to the area on Wednesday, June 13, with an intimate concert at Painted Sky Studios in Cambria at 8 p.m. “I received a call a couple of weeks ago from my songwriting friend Jude Johnstone,” said Painted Sky proprietor Steve Crimmel. “She mentioned that Peter Case was coming down the coast, and was looking to fill a Wednesday night, and wondered if I would be interested in hosting a show. Of course I replied without hesitation. Peter is one of those artists that I have always wanted to see.” Tickets are available for $20 at Cambria Business Center, Boo Boo Records, or by calling 927-8330.