As the Santa Barbara County Sheriff’s Department continued its investigation into the shooting death of a Santa Maria police officer by a fellow officer, more details trickled out about the incident that made national headlines. 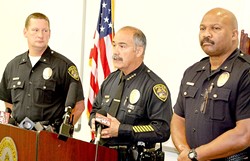 Officer Albert Covarrubias, Jr., a four-year veteran of the department under investigation for an alleged “inappropriate and explicit” sexual relationship with a 17-year-old girl, was shot and killed while on duty at a routine DUI checkpoint in the early morning hours of Jan. 28.

According to police, two SMPD supervisors attempted to arrest Covarrubias, 29, as he was clearing the checkpoint. A struggle ensued, and Covarrubias reportedly fired on officers. SMPD officer Matt Kline—who, according to the victim’s father, was Covarrubias’ best friend—returned fire, hitting the officer once in the chest. Covarrubias later died during emergency surgery at

“This is a very tragic and unfortunate incident and a situation that unfolded very rapidly,” Macagni told reporters at the police station. “The results are something we’re going to have to deal with.”

Macagni said detectives received “minimal” information on the evening of Jan. 26 that Covarrubias had engaged in an inappropriate relationship with a minor female, but the information wasn’t detailed enough to act on disciplinary measures.

At around 1 a.m. the morning of the shooting, Macagni said, the department received more “explicit” information, requiring the officer’s immediate arrest on suspicion of multiple felonies.

“We had no choice,” Macagni explained. “We had information that was very specific that demanded we go out and take this officer off the street immediately. There is some witness intimidation involved, and the allegations of sexual misconduct are very explicit.”

The nature of the information demanded that officers not allow Covarrubias to leave the scene, or it would’ve put the public at risk, Macagni said. Within a matter of minutes, officers were called to the checkpoint at Broadway Road and McElhaney Avenue to arrest Covarrubias, who was already aware he was being investigated.

“It was clear to the investigators that he knew that we knew, and he knew what was going to happen,” Macagni said. “We did not expect him to react the way he did.”

Macagni didn’t reveal the source of the leak, but said the department knew how Covarrubias found out he was to be arrested, and that the information didn’t come from inside. Macagni said Covarrubias’ reaction to the arrest was “telling,” and added that the officer wouldn’t be honored, as is typical for officers killed in the line of duty.

“I cannot put somebody like that up on a pedestal and honor them as a fallen hero based on the information that I have,” Macagni said. “That would be totally hypocritical on my part.”

A Santa Maria youth police explorer group was helping with the checkpoint on the night of Covarrubias’ death, but had already left at the time of the shooting, according to Macagni.

The department placed Kline on paid administrative leave, as is usual following an officer-involved shooting. In addition to the criminal investigation by the sheriff’s department, the SMPD is conducting its own internal query into the incident. The department didn’t return calls, as of press time.

Covarrubias is survived by his wife, whom he’d married just weeks before his death. Family members of the deceased officer questioned why the attempted arrest had to take place as it did and said fellow officers wouldn’t be welcome at the funeral services.

As of press time, Covarrubias’ friends and family had set up a makeshift memorial of candles and balloons near the scene of the shooting. ∆