Quiet on the set

At SLOMA, Patrick McGinley's 'Below the Line' reveals an unseen side to filmmaking

There is a boring side to the filmmaking process,” admits photographer and filmmaker Patrick McGinley. “You don’t see that a lot, because most of the photos are of the stars, the directors. There’s a side of it you don’t see—all the people waiting for lunch.”

A cinematographer and second unit director who has worked on more than 40 films, McGinley is privy to a unique side of the moviemaking process. He’s documented this angle in the San Luis Obispo Museum of Art exhibit “Below the Line: Photos from a Movie Set,” a series of fascinatingly unglamorous photographs from the sets of several made-for-TV movies. (The show, timed to coincide with the annual San Luis Obispo Jewish Film Festival, hangs Jan. 4 to 27 in the museum’s Nybak Wing.)

“When I first got into it,” McGinley says of his career, “my dad came to visit. And we were shooting a small location where they could only fit one camera in the room. So for 12 hours, I sat outside and did nothing. And my dad sat there watching me for 12 hours: ‘This is what you do?’” He laughs. “Picking up the camera was kind of a lifesaver. It helped keep me sane on days like that.”

In the eyes of McGinley’s subjects—mostly fellow crewmembers from the grip and electric departments—one sees the long hours, boredom, heat, cold, and fatigue of working on a film set. A man sits atop a ladder, waiting, head resting idly against his propped fist. A figure looks through a camera lens, face obscured by the upturned hood of a fur-lined coat, cinched as tightly as it will go against the cold. Another slouches by a tripod, looking into the distance. A lone crewmember, tools in hand, stands at some remove from the lights and the action, casting a long and lonely silhouette in the growing dark. People without the luxury of being absorbed by a task seem perpetually waiting, listening for their cue. 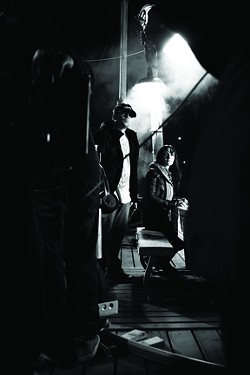 But look harder, and there’s more to the scene. In the faces of McGinley’s fellow workers one glimpses dedication, satisfaction, and a deep sense of camaraderie. There’s trust in their relaxed, candid postures and steady gazes. In fact, in describing his job, “family” is a word McGinley keeps using.

That’s a theme that extends throughout much of McGinley’s other photographic series, which chronicles the lives of motorcyclists and the rockabilly band The Loveless. A more recent project involved portraits of superhero characters from the webseries Shelf Life.

For McGinley, film and photography have long been parallel pursuits. He graduated from the University of North Texas with a degree in radio, television, and film and a minor in photography, later going on to graduate from the American Film Institute Conservatory in Los Angeles with a degree in cinematography.

“Below the Line” takes its name from the industry term for people working on a film’s physical production (“above the line,” conversely, refers to people with influence over the creative direction of the narrative, such as the director, actors, and screenwriters). The work’s often extremely physical nature is emphasized throughout the series, and it’s not hard to look at a photograph of the grip department hard at work and imagine a construction worker, or a farmer toiling lovingly in his field.

I say “his,” of course, because there are precious few women working in electrical and grip departments of film projects, and none at all in McGinley’s exhibit.

“There aren’t any women,” McGinley concedes. “It’s an issue I did run into on the film sets. For the most part, filmmaking is heavily biased toward guys. Typically the grip and electric side are mostly male. And the women on the set, when they see a camera, they kind of put their arms around each other and pose. But I kind of like the candid moments; when they ignore you, you get more interesting stuff.”

Arts Editor Anna Weltner is ready for her close-up. Zoom in at aweltner@newtimesslo.com.