Success, but at what cost?

The cops were right.

Their strongly worded television and newspaper ads kept out-of-town revelers away. Their massive numbers and quick response kept rowdy crowds from forming. And the $500,000 they spent meant that San Luis Obispo didnâ€™t wake up Sunday morning like it did last year: with a hangover; hundreds of thousands of dollars in property damage; and its drunk; rioting face plastered on television screens across the nation. 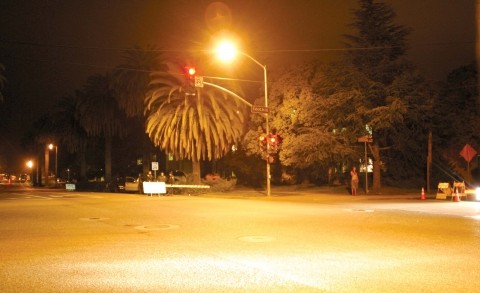 #City Council member Paul Brown spent Friday and Saturday nights walking through the crowds of police and students along Foothill and California. And when several hundred cops broke up a crowd at around midnight on Saturday near Mustang Village, the only intense moment of the weekend, he stood on the fringe and watched.

â€œI hope I donâ€™t have to see something like that again, but it was a very effective deployment.â€?

Other city and police officials had equally glowing assessments of the evening. Captain Dan Blanke with the cityâ€™s police department didnâ€™t hesitate to call the weekend a victory.

â€œWith all those officers and [our] plan, it was definitely a success,â€? he said.

But at what cost did San Luis Obispo buy that success?

First there is the half-million dollars police officials estimate they spent on planning and execution. That paid for a yearâ€™s worth of planning, the coordination of 22 different law enforcement agencies â€” everyone from the Attorney Generalâ€™s office to the FBI was involved â€” and the overtime, feeding, lodging, and transportation of the hundreds of law enforcement officers.

Captain Blanke said heâ€™s already heard people complain that there were too many cops.

â€œTo that I just say, â€˜We needed every one of those officers out there when things started heating up on Saturday night,â€™â€? he said.

â€œOur primary goal was to avoid another riot, and if that police presence and response [time] is what it took, then it was worth it.â€?

The second thing the weekend cost the city was a loss of revenue. In an earlier interview, Chamber of Commerce CEO and President Dave Garth said the show of force would probably have little effect on the cityâ€™s tourism trade; it probably makes very little difference in the long run, he said.

Liquor store owners would disagree with that. Brahim Souki, owner of Campus Bottle on California Boulevard, estimated that he did 65-75 percent less business than last year, mainly because of the number of cops on the street corner where his business is.

Tom Kridi, owner of Cork and Bottle on Foothill, made a similar estimate. â€œToo bad itâ€™s cancelled,â€? he said. â€œWe lost of lot of good business for the city.â€?

Some local motels and inns also saw a slight drop in business. Many reported that their guests were uncomfortable with the large police presence and spent much of their time out of the city.

The last cost is harder to quantify. Police and city officials, along with some business owners, have reiterated again and again that no amount is too much when it comes to keeping the city and its citizens safe. But what does creating a once-a-year virtual police state near Cal Poly do to San Luis Obispo as a whole?

Is that something the city will ever get used to?

Rob Bryn, San Luis Obispo police department spokesman, guessed that as years go by, the cityâ€™s response will change as the number of out-of-control partiers decreases. But no matter how the city responds, he said, there will always be people in the business, student, and general community with negative comments.

#Bryn prefers to look at the positive response heâ€™s seen: the number of students who had their pictures taken with officers, the number of times his department has been thanked for calming Mardi Gras, and the fact that there were no use-of-force complaints over the weekend.

â€œWe had no other recourse. Had we not done this â€¦ What are we going to let them do, burn down Mustang Village?â€? he said. â€œBig picture view: Yes, it may have hurt some local business, but a riot would have a longer consequence than one weekend.

An uneasy night on the town

Burrito Man was psyched. At 10:30 p.m. on Friday night he had already made a cool $30 from his homemade bean, rice, and cheese burritos. With a pink sombrero and a Budweiser cooler attached to his handlebars, Burrito Man hocked $2 burritos to the hungry party people.

â€œIf you donâ€™t like it Iâ€™ll give you your money back,â€? he said from the seat of his beach cruiser-turned burrito cruiser. Burrito Man, aka Eric, a 23-year-old Cal Poly student, recognized a niche in the market that needed to be filled â€” partiers need munchies â€” so he let his entrepreneurial spirit take over.

After a brief stop on California and Foothill, where he sold three burritos to the congregation in front of the KCOY news van, Burrito Man rolled on into the night to find more customers. â€œHappy Fat Friday!â€? he yelled, and was gone.

And such was the scene over the now infamous No-Mardi Gras weekend. Rubberneckers, partiers, cops, gawkers, and hawkers converged on California Boulevard â€œjust to seeâ€? what would happen. And not much could, or did, happen with the heavy police presence.

About 400 police officers were on hand, but it felt like a lot more. Officers on ATVs patrolled the railroad tracks, officers on BMW motorcycles patrolled the streets, and officers with plastic tie wraps doubled up on their belts kept watchful eyes on nearly every street corner, moving students along as they began to congregate. They said hello, and offered what became the standard tagline for the night: â€œStay safe,â€? which some students eventually appropriated and relayed back to the officers.

The cordial small talk may have been key to the success of keeping this yearâ€™s Mardi Gras quelled, but there still was an unmistakable feeling of unease. 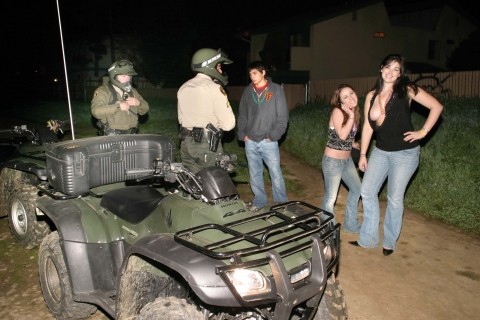 #"Our intention was to have a presence to prevent violence,â€? said Eric Veium of the PSA, and â€œto get footage of crimes of students and officers.â€?

The PSA teams, dressed in orange, were immediately visible among the blue and black along California Boulevard. At a briefing earlier that day San Luis Obispo, Police Chief Deb Linden had reminded officers of the group in orange.

As the PSA team circled the California and Foothill area, they greeted cops and cops greeted them. â€œFirst orange shirt Iâ€™ve seen tonight!â€? one officer said.

The group was fairly well received, too, except for the occasional drunk student who mocked them.

A feeling of mutual skepticism became apparent in a strange moment of modern reality. Outside of the Sierra Vista Regional Medical Center, PSA members Dahl and Jesse Ralston were filming an arrest. The arrestees across the street had already been cuffed with white plastic tie-wraps and were sitting on the curb, waiting to be put in the paddy wagon, when the PSA team showed up.

Plain-clothed officers revealed their cameras, and almost immediately began filming Dahl and Ralston. Then another two-man team of progressive students showed up with a camera. Soon four cameras, two on each side of the street, were aimed at each other, documenting each otherâ€™s moves. It was a surreal scene, like standing in between two opposing mirrors, staring into infinity.

â€œDoesnâ€™t look like anythingâ€™s going to happen,â€? said one of the PSA members.

And nothing did on Friday. Saturday was a different story. Three PSA teams recorded the cops moving a group of students out of the Mustang Village area. PSAâ€™s Veium, who is reviewing all of the footage from the weekend, said that none of the teams recorded any egregious or blatant crimes.

â€œI donâ€™t think they [the police] crossed any lines,â€? he said. But, â€œcoordination was bad.â€? Veium said that when things started getting heated in Mustang Village around 12:30 a.m., communication between students and police broke down. Veium said students received conflicting orders about where to disperse from and in what directions. â€œThere was some definite confusion, and communication with police was just terrible.â€?

Many partiers, especially those from out of town, were let down. Two guys had driven from Salinas for the action. They said they knew the cops were going to be out in force, but they were still looking for all the â€œâ€˜Girls Gone Wildâ€™ shit.â€? One even had a video camera just in case.

A group of international exchange students congregated near California and Foothill.

â€œThis is crazy,â€? said one student from Sweden, who didnâ€™t want to give her name. She was surprised at the heavy police presence even though she had seen the city-sponsored anti-Mardi Gras ads. She still expected more of a party. â€œWe wouldnâ€™t be here if it werenâ€™t for the ads.â€?

#Around midnight the rumble of an indifferent freight train began to outdo the yells and hollow jabbering of the students. The engineer laid on the horn and then the trainâ€™s headlights began to illuminate the tracks.

Earlier, students had been sneaking through the fence across the tracks and there were officers on ATVs patrolling the dark corridor. You could hear drunken screams ripping across the dark tracks.

The train, unlike the city, was not going to stop for a party. It barreled along parallel to California Boulevard, honking and hauling, fast and not slowing at all as it ran through Mardi Gras like nothing was happening.