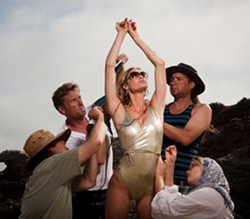 Photography, videography, talent, props, wardrobe, hair, makeup—if it’s a production you want, a new company started by Nipomo resident Adam Dyer, will probably be able to make it happen for you. Dyer/Craft Creative Services, a fitting name considering the multitude of services they have to offer, can shoot commercials, photograph events, or make you over and photograph you editorial style, just to name a few.

Dyer, who describes himself as a “stylist/photographer/producer” has a work history that is as diverse and extensive as the list of services his company provides. He’s worked in post-production at Culver Studios, shot commercials in Europe, started a production company in San Francisco, worked for producer Saul Zaentz of One Flew Over the Cuckoo’s Nest, Amadeus, and The English Patient fame, ran a sound stage facility in Hollywood, worked with artists like Green Day, Alice in Chains, Rob Zombie, Frances McDormand, and Matthew McConaughey, worked as a paparazzo, shot the occasional safari in Africa, and was even a dive instructor in Puerto Rico for five years.

In his latest venture with Dyer/Craft, Dyer is hoping to use his experience and offer something unique to the residents and business community of SLO County. “It’s not a placid experience,” Dyer said, in reference to his creative approach. If you’re a business looking to for a fresh angle in which to be presented to the public, Dyer says he can “take someone’s business and make it look like more than just a catalog ad. I can make it look really beautiful.”

If it’s personal photos you’re interested in, Dyer can make you over himself and shoot simple headshots or photograph you in more elaborate settings. “I want you to look through my gallery and pick a style, like swatches,” Dyer said. After getting a sense of how a client wants to be presented, and wants to feel, Dyer’s approach is to style somebody “from the inside out.”

One of Dyer/Craft’s recent projects was shooting the Paso Robles Chamber of Commerce’s “Puttin’ on the Ritz” 1920s gala at Broken Earth Winery. In addition to photographing feather-boa- and fedora-clad guests arriving in a period-correct automobile and enjoying a meal fit for a Fitzgerald, Dyer/Craft also created a Prohibition-themed photo op where guests could pose with a barrel of hooch, pickaxe in hand, as if they were ready to break into the good stuff.

Dyer/Craft Creative Services can be reached via adam@dyercraft.com. For more info and examples of Dyer’s work please visit dyercraft.com.

The Guadalupe-Nipomo Dunes Center will hold the 2nd Annual Huell Howser Memorial Nature Walk on Feb. 8 at 10 a.m. The docent-led walk to celebrate Howser’s life, who was best known as the host of the TV show California’s Gold, will take visitors through the riparian area of the dunes to the beach overlook. The Guadalupe-Nipomo Dunes Center is located at 1065 Guadalupe St. in Guadalupe. For more info go to dunescenter.org.

Intern Trever Dias compiled this week’s Strokes & Plus. Send your business and nonprofit news to strokes@newtimesslo.com.