Things were destined to get dirty in the 24th Congressional District race.

A hotly contested battle is underway as nine candidates vie for the open seat that will be vacated by U.S. Rep. Lois Capps (D-Santa Barbara), who’s held the position for two decades.

Now, as California’s much-anticipated June 7 primary election comes barreling forward, the state’s “jungle” primary is living up to its name. Per California election laws, the two candidates with the most votes in the primary move forward. That differs from more traditional primary structures, in which one candidate from each political party advances. 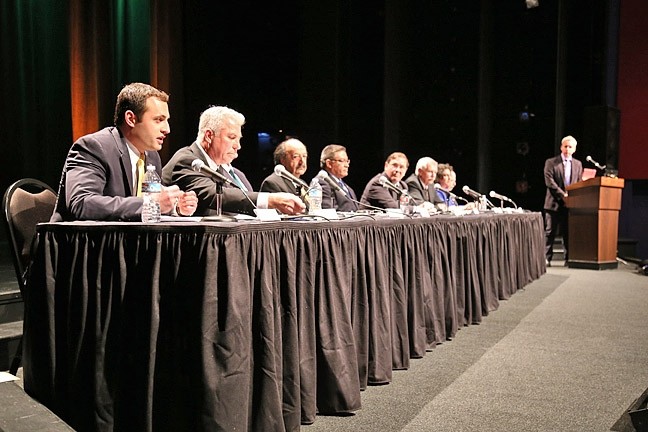 That’s left the top four candidates, and their backers and opponents, scrambling for the upper hand. Those candidates are Republicans Katcho Achadjian and Justin Fareed and Democrats Salud Carbajal and Helene Schneider.

As each candidate and their campaigns continue into the final weeks, larger forces, armed with a lot of money, have arrived on the Central Coast.

That money is coming in the form of independent expenditures, which, per federal campaign financing laws, can’t be coordinated with any individual campaign or candidate. But, the expenditures—coming from both political action committees (PAC) and the funding wings for the Democratic Congressional Campaign Committee (DCCC) and the National Republican Congressional Committee (NRCC)—can be spent to support or oppose a particular candidate.

As of press time, independent expenditures reached $915,558, the largest of any congressional race in California, according to Federal Election Commission (FEC) campaign finance reports. A majority of that money has been spent in the last two weeks.

Carbajal, whom Democrats have picked as the preferred candidate, has benefitted the most. The DCCC has spent $360,819 thus far to show their support for Carbajal, while the House Majority PAC—a group formed by U.S. Rep. Nancy Pelosi and several other high-profile Democrats with the goal of putting a Democratic majority in the U.S. House of Representatives—has spent $209,218 on Carbajal’s behalf. The House Majority PAC also spent $7,107 on a mailer attacking Achadjian.

On the Republican side, the Citizen Super PAC has steadily spent money to support Fareed, thus far putting forward $118,414 toward direct mailers. The NRCC has spent $110,000 each to attack Carbajal and Schneider in an effort to pull votes from the Democratic frontrunners.

The possibility that Achadjian and Fareed—both Republicans—may be the top two vote getters, completely edging out Democrats from a chance to win the seat in November, appears to worry the Democrats.

New Times obtained a newsletter paid for by the DCCC and several other Democratic campaign committees (not including Carbajal’s) that makes an appeal for support and contributions. The newsletter, which is part of a “red to blue” push to win over swing seats, says the Democrats “are in danger of not having a Democrat on the general election ballot in this Democrat-held open seat.”

“Carbajal entered the June all-party ‘jungle’ primary, followed by two strong Republicans and several additional Democratic candidates, setting up the opportunity for Republicans to advance two candidates past June and shut the Democrats out of the general election,” it says. “Salud will need to continue to raise considerable resources to advance past the June primary and hold this seat for the Democrats in a competitive and costly general election this November.”