Following the May 25 death of George Floyd in police custody in Minneapolis and the ensuing protests against systemic racism, local nonprofit R.A.C.E. Matters SLO put forth a series of demands to SLO County and its seven cities that target police reform. 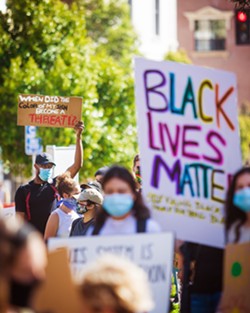 The demands, which have nearly 7,000 signatures in support at press time, call for a ban on chokeholds, diverting funds away from law enforcement, and establishing civilian review boards to oversee police departments, among other actions.

The petition set June 19 as the deadline for cities and the county to respond.

"Really for us, it's a statement of values," R.A.C.E. Matters SLO co-founder Courtney Haile told New Times about the demands. "And it's a call to action for governing bodies."

With the deadline passed, Haile said the group has corresponded with a majority of the local municipalities, with each taking varying degrees of action in response.

At recent city council meetings in SLO and Morro Bay, the cities separately declared racism a public health crisis—one of the group's demands. In addition, SLO Police Chief Deanna Cantrell announced she'd suspended the use of carotid restraints (when an officer puts pressure on the carotid arteries on the neck). Both cities will also explore starting civilian oversight boards.

"I think we have a new opportunity to make a difference here," Morro Bay City Councilmember Dawn Addis said during the June 23 discussion on the demands.

While R.A.C.E. Matters SLO is in contact in some capacity with the remaining cities, Haile said the leadership has received no response from SLO County or the Sheriff's Office. Officials from both agencies did not respond to requests for comment from New Times before press time.

"All I can say is I haven't heard anything," Haile said.

Haile acknowledged that some of the action items in the demands won't happen overnight. But she said the petition represents the organization's vision for change, and that "we look forward to collaborating on long-term strategies in this vein."

"R.A.C.E. Matters felt a responsibility to rise to this occasion and have a clear vision when we are marching in the streets of what justice looks like here," she said. "We want to inspire local action to get cities thinking about what their role is in supporting an environment where black and brown people can thrive." Δ