Two crackerjack board shops are taking skate, surf, and snow to a whole new level.

The Central Coast is well known for the classic (and monstrously marketable) surf and skate lifestyles, as well as the many stores that cater to those wet-and-wild needs. But what makes certain shops stand out? Two local board establishments are hanging their shingles in new locations, while answering that very question. 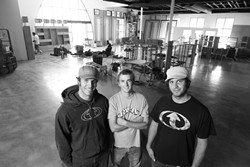 # and skate world, yet maybe that's why One Way Board Shop is so successful. In addition to its Ventura location and two shops in Santa Maria, One Way will open in San Luis Obispo on Sept. 15. Co-owner Dan Pankratz (who operates the shop with his twin brother Dave), hopes it will be a good addition to SLO "by not just being another business, but being a supporter of the community in any way we can."

One Way has family appeal, and that shouldn't be a surprise, since many of the employees are part of the Pankratz brood. And to keep up with the stiff competition, One Way will carry out some very cool promotions and events in the coming weeks. They've been raffling away boards at Farmers' Market in San Luis Obispo (surf, snow, and skate), and there's a snowboard contest set for Sept. 29, to be will be judged by a professional a surf contest series in Pismo Beach and Morro Bay skate demos and tons of giveaways.

"We want to let people know we are here," Dan said, "and to promote the grand opening in SLO."

It's been 4,000 skateboards and more than seven years since Arroyo Grande's Monument Board Shop took its first steps in 2000. Billy Wallace and Gary Ellsworth (now of Tried and True Tattoo) craved a pure skateboarding shop, which fit their needs and those of their community. Now owned by Wallace and Bud Aquino, Monument has made its latest stop in Atascadero. Since opening its doors in March, momentum and a solid customer base are increasing everyday in the North County location.

Aquino believes Monument has that something special, resulting in a natural and inevitable growth: "We are always trying to keep up on what's next in skating, surfing, and music, as well as the clothing that pertains to the lifestyle. We are local guys, and each has been involved with surfing and skating for over 20 years, as sponsored athletes and local standouts. We strive to have the best customer service. We have a large group of friends that come into the store, rather than customers and we currently have the strongest skate team in SLO County, bar none."

Monument plans to expand into a third location within the next two years.

Christy Heron shreds on paper, and that's about it. Reach her at cheron@newtimesslo.com.