The New Times Music Awards will melt your face off!

Broken hearts! Swollen egos! Groupies! Roadies! Rock stars! A raffled guitar and high-end headphones! Miniskirts! Cool T-shirts! Free CDs! Children dancing! Sunshine! Nightlife! Decommissioned nuclear missile silos! What do all these things have in common? They’re part and parcel of this year’s New Times Music Awards, an event so potentially awesome I just peed my pants a little while thinking about it!

What’s that? What do decommissioned nuclear missile silos have to do with it? Our ten bronze, first place awards, affectionately called Newties, were crafted from bronze reclaimed from decommissioned nuclear missile silos. Seriously! This event is going to be freakin’ radioactive! Some winners may gain superpowers simply by holding these awards, especially if they’re also hit by gamma rays from space and bitten by hybrid
spiders, but I digress.

Starting tonight, Thursday, Aug. 19, I’ll be heading to Downtown Brew to witness the opening night of the NTMA. This all-ages event will feature the finalists of the Rock/ Alternative genre. Show up, find me, and say something hilarious, and you may wind up in this column next week! 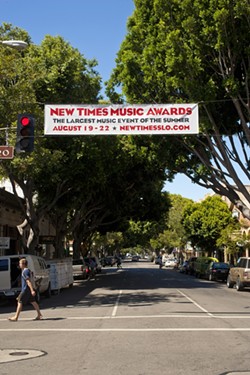 On Friday, Aug. 20, I’ll be at Frog and Peach for the Reggae/ Worldbeat night. I’ll be holding an impromptu “I’m more baked than you!” contest. Gotta be 21 or older for this one, kids!

Saturday, Aug. 21 is going to be a long day, so I’ll be pacing myself. We’ll start off at Mission Plaza for the all-ages Classic/ Jazz, Country/ Americana/ Bluegrass, and Blues/ R&B genres before taking a break and then heading to Native Lounge that night for the 21-and-older Hip-Hop/ Rap/ Electronica genre, an evening that also includes dancing to hotsy-totsy DJ Luna Jay. (Note to self: Find your white suit, silk shirt, and man girdle.)

Finally on Sunday, Aug. 22, music impresario Steve Key showcases the songwriting contest winners and honorable mentions at the all-ages Steynberg Gallery, which I recently learned was pronounced stainberg. Who knew? This final afternoon event will present not only the songwriting awards, but also the award for Best Overall, Album of the Year, and Readers Choice (The winner for that one garnered 456 first place votes out of 4,100 votes cast!).

This is bigger than the Oscars! This makes the Grammies look like a grade-school recital! Obama’s Nobel Prize ain’t got squat on this deal!

“And the award for ‘Most Hyperbole’ goes to … May I have the envelope please? … Oh, my God! It’s me! I want to thank all the little people, you know who you are (Vern Troyer!), my manager, my mother for constantly correcting my grammar, Jesus for dying for my sins, Kanye West for showing me how to act like a total douche bag. I’m sure I’m forgetting someone; but you, too. Thank you! I annoy you! I really annoy you!”

Editor’s note: Glen Starkey will not be emceeing any of these events. We’re actually taping his mouth shut. Don’t be afraid. Please come.