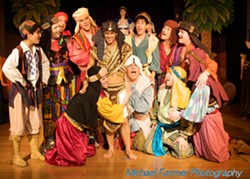 New Times Who are you?

Andrew Olson (Olson plays the lead in Joseph) I am 22 years old and a music major at Cal Poly. I did the role once in high school, so I revisited it a bit, read the Bible story a couple of times. The Kelrik show is really fun. The cast is big and there is so much energy on that small stage.

New Times What’s your last thought before you hit that stage?

Olson Hmmm…good question…I try not to think about who is out there, I try to represent myself well and perform the best I can.

New Times What is next for you?

Olson I will be in the upcoming Songs for a New World at Cal Poly and in High School Musical 2 at Kelrik, opening July 10.

New Times Tell me about Joseph and the Amazing Technicolor Dream Coat and its music and musical genres.

Erik Austin [the show’s director, and founder of Kelrik Productions] It is quite amazing what’s happening on that little stage. It is kind of every style of music, from pop to country to calypso, to ’50s old school Elvis Hollywood style.

New Times I know you’re directing the show. Why choose Joseph for your first show in the “Believe” season in 2009?

Austin I’ve always loved Joseph. I saw it as a kid at PCPA and the narrator in the show, my friend [Rachel Vasquez] and I saw the production in L.A. with Michael Damian, and I drew a picture of him and we got to go backstage and his manager took an interest in me. The show went to Broadway and I moved there that year. … I wanted to audition but never got the chance, but I got to see the show whenever I wanted, which was over 100 times.

Austin Yes, 100 times. Then when I moved to L.A, I auditioned for a dinner theater production of Joseph and did the show for three months, and then when I moved back to SLO Chameleon Productions was doing the show and I was in that production as well. It has been a huge part of my life, but this is the first time Kelrik has staged it. Nothing has been changed. No dialogue. Not one thing is spoken. It’s 70 minutes of singing.

Austin Keith at Costume Capers helped. Everything was rented. There are 114 costumes and 45 wigs.

New Times What are you doing as director during the performances?

Austin I actually had to step up and be in the show. We lost one of the 11 brothers, which was hard and fun at the same time. I also choreographed the show with Joe Ogren, but to be on the stage with 36 people is overwhelming. It’s amazing to watch from the audience, to see how everyone is moving together but when you’re on stage it is very tight.

Austin I’m really excited about our next show, Dogmusic (opens Feb. 21). It’s a story of a young dog who escapes from its owner and ends up in a pound.

New Times You’re not using a real dog, are you?

Austin No, it’s all actors playing the parts. And the cool thing is this show has only been produced two other times. The people who wrote the show saw our production of Annie last year, loved it, sent me their script and wanted me to produce Dogmusic for Kelrik in SLO. It was produced in 1998 in L.A. and in 2004 off-Broadway. It is a really touching story. I am excited because it’s a brand new work. In Willy Wonka I am starring myself in it—I’m playing Willy Wonka. Also, I shot a reality show about Joseph, and my life, behind the scenes. Seven days straight with three cameras following me around the week Joseph opened. We are going to try to get it picked up by networks because my life is pretty funny. It’s called The Show Must Go On. There’s a lot of drama that surrounds everything.

Christy Heron is not sure about Technicolor coats but she sure loves her mink coat. Throw red paint at her at cheron@newtimesslo.com.