The tasting room is open daily from noon to 9 p.m. at 779 Higuera St. in downtown San Luis Obispo. Stay tuned for details on its grand opening celebration, slated for Aug. 20. Visit ragtagwineco.com or follow the company on Instagram and Facebook @ragtagwineco.

Until recently it lacked one vital ingredient: a tasting room. With hundreds of wineries fanning out across the county—and annual visitors estimated at 7 million, according to tourist board Visit SLO CAL—local entrepreneurs Deron and Sarah Brewer thought the concentrated downtown audience would provide a lucrative secondary outlet for the industry.

While Paso Robles has a thriving downtown wine scene, with 20 tasting rooms and another 30-plus just 5 miles south in industrial complex Tin City, downtown San Luis Obispo has largely missed the boat, the Brewers said.

"We are really hoping that we can lead the charge to bring other wineries to downtown San Luis Obispo," Deron Brewer said. "That would benefit us all because not everybody wants to drive to Paso or even Edna Valley."

"I call it the Kettleman City effect," he explained.

"If you're driving down the freeway and you see just one gas station, you're probably not going to stop," he said, "but if you see several options, you might pull off."

One tasting room might not prove a huge draw, but multiple options within walking distance of each other would help establish SLO as an urban wine destination, he continued.

The Brewers, who own several businesses in town, including Edna Valley Market and Dave's Automotive, had always dreamed of owning their own winery. The conditions were ripe when Sarah's brother, Jeff Huskey, graduated from Cal Poly with a degree in wine and viticulture. After a three-year stint at Harmony Cellars as its assistant winemaker, Huskey was ready for the lead job.

The trio launched their Ragtag label in 2016. Operating out of a partially finished wine production facility on Clarion Court and producing only 2,000 cases annually, Huskey quickly established himself as an accomplished winemaker, with multiple accolades already under his belt.

His 2017 chardonnay, petite sirah, pinot noir, malbec, and Meritage, as well as his 2019 rosé, have garnered industry awards ranging from gold and platinum to Wine Enthusiast's Editor's Choice designation.

With the winemaker position filled, the co-owners set out to find the perfect person to run their future tasting room.

Brewer found the ideal candidate at the Madonna Inn in late 2019. Steakhouse and banquet server Patrick McTiernan "blew me away," he said.

"I fell in love with him as soon as I met him. I went home and told my wife I've found the perfect guy. I was amazed by how incredible he was at everything he did. We went to coffee after that, and it took off from there," Brewer said.

McTiernan had years of management experience at restaurants in Portland before moving to the Central Coast in 2016 and landing a position at the Madonna Inn.

Initially, McTiernan shadowed Huskey at the production facility, receiving a crash course in winemaking. Then, in 2020, another cog fell into place. The Brewers found the ideal tasting room.

"We went downtown to Higuera and Chorro streets," Brewer said, "and serendipitously there was a spot exactly where we wanted to be that had just become available. It was in the perfect building and the perfect space."

The Brewers secured the tasting room at 779 Higuera St. and set about transforming the former Pura Vida skin care store into a hip hangout with an eclectic ambience.

"The name Ragtag is a tribute to the diversity of the terroir of the area," Brewer said. "It celebrates our abundant grape varieties, but also reflects every other aspect of our new business venture.

"The basic premise behind Ragtag is how absolutely boring and drab everything would be if people were exactly the same. It's the concept that it's the differences between us that make things interesting and fun, and allow people to grow and do better," he added. "As we bring more people into the project, their unique perspectives make us all ... better off as a whole. That is our metaphor representation for what we mean as a brand." 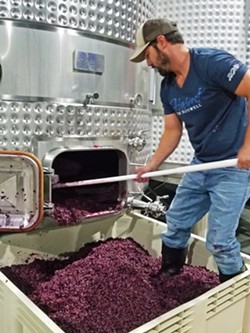 McTiernan feels the tasting room has all the necessary elements to flourish: incredible wines, a cool vibe, outstanding service, and unique décor.

"These were the four points I wanted to hit," he said. "I kept that mantra going in my head. That's what people tell their friends about."

Meanwhile, at the winery production facility, Ragtag nabbed the dynamic duo of Alyssa Ball and her assistant, a blind chocolate Labrador named Scout. Ball ran the direct-to-consumer program at Talley Vineyards in Arroyo Grande for more than a decade before becoming Ragtag's administrator and e-commerce sales director.

"Patrick and I make a great team because we are both in positions that allow us to play to our strengths," Ball said. "Patrick is a hospitality super star and thinks through every detail to ensure an amazing customer experience.

"I love to live in the numbers, dive into data and metrics, create sales projections—all that exciting stuff! Between the two of us I believe we are going to be able to build out a great roadmap for Ragtag's future."

Recent customers Pam and Jeff Forrest were so impressed with their overall experience at Ragtag that they joined its wine club.

"The crew at Ragtag were attentive, informative, and friendly," Jeff said. "Patrick is delightful and is an excellent historian about the building, the landlord, the winemaker, the décor, and ... how Ragtag got started.

"Pam loved the chardonnay the best, and I teeter-tottered back and forth between the cab sauv and the Meritage."

The Ragtag team is just getting started. Future plans include a second tasting room and event venue at the wine production facility, as well as art workshops and other unique experiences at the downtown tasting room.

Huskey, meanwhile, plans to drop a "flavor bomb," with a 2019 single-varietal petit verdot.

"Most often you only see [petit verdot] used as a blending tool, and that's to add tannins and mid-palate weight to whatever they're blending it with. But as 100 percent, it's just delicious," he said.

Additionally, Huskey plans to harvest syrah and grenache, then blend the two with a dash of pinot noir to create a GSP.

"I always try to have interesting new things that we're releasing," he said. "In the world of wine, they always consider us California winemakers as cowboys doing crazy stuff. I love it. I never want our tasting menu to get stale." Δ