It’s Sunday, Aug. 2, and I’m in clothing designer Liz Rhoads Cordoba’s inner sanctum, the place where the magic happens. One wall’s consumed by a large set of shelves packed top to bottom with plastic storage bins, each packed with the tools of Cordoba’s trade—scrap material, used clothing, and anything she might need to turn a discarded shirt or dress into a one-of-a-kind piece of wearable art.

She’s part of a collective of designers who call themselves Ragtime, and this Friday, Aug. 7, they’ll show the public what they do during Art After Dark at Yarns … at the Adobe, during a 6 to 9 p.m. opening.

“We take used clothing, usually from thrift stores, and turn it into something else,” she explains.

Cordoba, a retired high school Spanish teacher, came late to clothing design. About three years ago, she took a class at Cuesta College taught by Melinda Forbes, who taught her students to “take some dowdy sweater and start cutting and turn it into a vest or a bolero, anything!”

The one-month class ended, but the students’ enthusiasm didn’t, so they formed Ragtime and began sharing their skills with one another, learning to sew and stitch and reuse clothing, to hand-make buttons, to resize dresses, anything, including one technique that Cordoba says is “hot” right now, “Alabama Chanin,” named after its creator Natalie Chanin (pronounced Shannon). Basically, you sew one kind of material under another, after cutting away a design in the top layer so the bottom material shows through.

“Here’s what I started this morning,” Cordoba says, pointing to a dress on her mannequin. “This piece of fabric will show through the top fabric. That’s Alabama Chanin. This will be a coffee pot pouring coffee into a cup sewn into this pocket.”

Steam swirls up from the coffee pot and a drop of liquid descends from the spout toward the cup—it’s whimsical, fun, and stylish!

“This was made from a discarded T-shirt,” she says, gesturing to a deep blue-green dress with striped straps, matching pockets, and a stitched design that serpentines across the front.

Cordoba has been big into SLO’s Mardi Gras scene for years, and she got her start stitching costumes, but what she’s doing now she calls “next level stuff.”

“Costumes are pretty quick and dirty. You may only wear it a couple times, so it doesn’t have to be really good,” she says. “What I’m doing now [aside from Ragtime] is designing sustainable bicycle clothing for on- and off-bicycle use. I’ll have those items manufactured [for mass production]. Ragtime is more of a sideline to exercise my creativity. This feeds me a lot, and it’s so much fun, plus I like being part of a group.”

She estimates there are about a dozen women involved in Ragtime—currently no men—but she likes the group because the members “all have really different styles. Even if we’re using the same techniques, the garments are so different. It’s about sharing ideas, not about competition.”

And in the spirit of sharing, at the art opening, the group will be giving out free “goodie bags” filled with “buttons, sewing needles, threads, lace—sewing notions. The idea is to spread the excitement about what we do.” 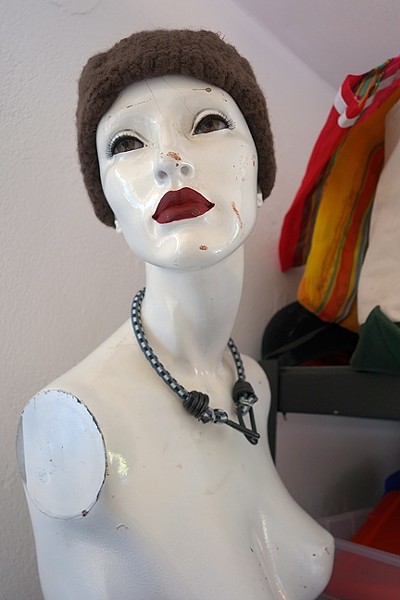 The goodie bags are limited in number, so if you want one, come early, meet Ragtime, and spread the joy of one-of-a-kind wearable art. If you buy something, you’re guaranteed not to run into someone with the same outfit!