For pro football players in the 1960s and early 1970s, few things were as terrifying as seeing Raiders middle linebacker Dan Conners coming at you. The 6-foot-2, 230-pound crusher had a knack for finding the hole—or making the hole. 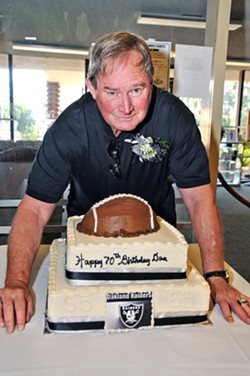 Conners' 15 career pass interceptions remain the most ever by a Raiders linebacker, and his two touchdowns and 16 fumble recoveries are the second most in Raiders' history. In 1967, he snagged a fumble for a 73-yard touchdown. In '69, he nabbed an interception and ran 75 yards for a another touchdown. He's also the only Raiders linebacker to make it to three Pro Bowls. Many agree he's the best middle linebacker the Raiders ever had.

Conners, a San Luis Obispo resident for more than 30 years, died on April 28. He was 77 years old, and this Sunday, June 23, friends, family, former players, and the public will gather at the SLO Elks Lodge to celebrate his life starting at 1 p.m.

Conners was introduced to SLO Town when his son came to play football at Cal Poly for a couple of seasons. By this time, Conners—who, after his playing career ended, became an assistant coach for the San Francisco 49ers and a scout for the Tampa Bay Buccaneers—was working as a scout for the Raiders. He wanted to invest in his new community, so he bought Bull's Tavern and later McCarthy's Irish Pub, enlisting Virgil Walle to run both watering holes. He and Walle had been friends for 50 years when Conners passed.

"We met at a July 1969 exhibition game against the Packers," Walle recalled, "and I got to know him. He was a loyal friend, extremely comical and bright—just a kind person, a funny guy. He loved to bust people's balls. I always told him, 'I think you'll make it to heaven, but you'll probably have to stay 40,000 years in purgatory to make up for all the ball-busting you've done.'"

Conners was a longtime member of the SLO Elks Lodge, and fellow member Rich Viar remembers his bone dry humor.

"He had the driest sense of humor of anyone I've ever known," Viar laughed. "We were up in Ferndale for the mule races, where Dan would go every year. [Fellow Elks member] Chris Jackson and I took Dan and all the boys from the lodge up there, and Dan decided to book rooms for the next year, so he walked over to the desk clerk, who told Dan they were already booked. Dan said, 'Well, that's OK. I was thinking about buying this place anyway, and the first thing I'll do is fire you.' The clerk was dumbfounded."

By all accounts, Conners was a private and humble man. He didn't like to toot his own horn and tell people who he was, but if they knew about his pro football career, he was always generous with his time.

Walle remembers helping Conners move homes, and Walle came across a box and pulled out an old letter in a cheap dollar-store frame: "The letter talked about Super Bowl II and mentioned how a certain play Dan completed was 'the finest linebacker play' the letter writer had ever seen. That letter writer was [Green Bay Packers and later Washington Redskins head coach] Vince Lombardi. Dan just shrugged and said, 'Oh, just leave it in there.'"

Bill Hales, who runs Ash Management, which eventually bought Bull's and McCarthy's from Conners, remembers him as a tremendous mentor. Hales started working at Bull's as a 20-year-old, first as the janitor and later as the doorman.

"Dan had a hilarious wit," Hales said, "and he was also a father figure to me. He'd pull me out of the bar and say, 'Let's take walk,' and we'd talk about life, what my plans were, what other interests I had. He always had the best stories, and when he moved to SLO, a lot of the mucky-mucks wanted to get to know him because he was an ex-Raider."

Conners' fame as a football player was never something he wanted to capitalize on. He was friendly to everyone—the guy who would sit at the end of the bar and regale you with stories, good naturedly bust your balls, but treat everyone with respect.

"When he owned the bars, it was about creating a family," Hales said. "He created laughter, which at its heart is what a bar should be. He was just a down-to-earth guy. I really miss him." Δ