Raise a glass to the stars

“It’s music you already know, you just didn’t know you knew it,” the director of the Pacific Repertory Opera, Mikele Hushing-Kline, observed. Opera can be found in movies, television shows, and recently in a Doritos commercial, she points out; “Opera’s everywhere. It’s omnipresent.” The Pacific Repertory Opera, whose slogan is “Opera for Everyone” will serenade a gathering of opera-lovers and the uninitiated at Robert Hall Winery’s Meritage Room on Sunday, Sept. 21. Called “Opera in the Vineyards,” the afternoon concert will present spectacular Central Coast opera stars and some fine Central Coast wines as well. 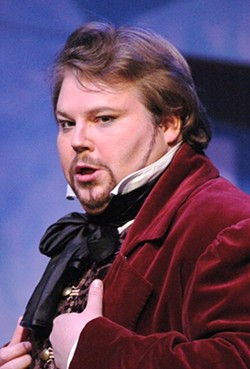 Soprano Carol Ann Manzi, tenor Christopher Bengochea, and accompanist Robert Ashens are scheduled to showcase their powerful voices, with performances by two other singers whose identities have not yet been divulged. Much of the concert will feature light, modern compositions.

Accompanist Robert Ashens doubles as PRO’s artistic director and will also serve as the narrator to explain the setting and history of each piece. For anyone who shrinks at the word ‘history,’ Hushing-Kline quickly adds, “it won’t be boring!” Ashens, she says, makes opera very accessible.

Although a self-described “business girl” in charge of the administrative side of the opera, Hushing-Kline waxes lyrical over the addition of Christopher Bengochea to this performance. Praising him as “a most glorious tenor,” she professed, “We’re very much looking forward to having him in concert.” Avid opera attendees remember Bengochea as Cavaradossi in the April 2005 production of Tosca.

Since 1985, the Pacific Repertory Opera’s events have provided opportunities for local musicians and choral singers to perfect their craft. The PRO often holds concerts in homes, churches, wineries, and community centers, with the goal of promoting the understanding and enjoyment of opera. “We’re always looking for an interesting new venue,” says Hushing-Kline.

“Opera in the Vineyards” takes place on Sunday, Sept. 21 at 3 p.m. Tickets for the performance cost $35 for adults and $17.50 for students and children. Tickets are available at www.propera.org.