Living the dream at Daou Vineyards in Paso Robles

During a recent visit to the spectacular estate of Daou Vineyards, perched high above Paso Robles atop Daou Mountain, winemaker Daniel Daou provided me a glimpse of the not-very-distant future for our North County wine region. Not only is Daou (pronounced Dow) striving to realize his dream of making cabernet blends equal to the finest in the world, he and his brother Georges Daou are fully committed to building an estate that will allow them to achieve that goal. 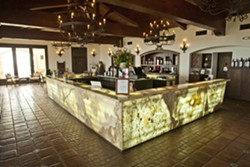 In my first meeting with winemaker Daou, we drove over the same roads I first traveled 17 years ago with winemaker John Munch, founder of Adelaida Cellars, who now owns and operates Le Cuvier in Paso Robles. How interesting, nearly two decades later, to see the extensive renovation the Daous have committed themselves to in resurrecting this storied estate.

Daou, who started making wine in Bordeaux when he was in his early 30s, said he and Georges plan to raise the bar for cabernet sauvignon and Bordeaux blends produced in Paso Robles—a boastful statement, yes, but I admire their dedication to raising Paso’s reputation for producing world-class wines. And it’s only achieved by the strictest dedication to quality throughout production, as Daou explained of his winemaking techniques:

“I only use free run juice for our estate wines, I never press the grapes. I wash the grapes [once harvested] with filtered water if that’s needed. They only do that at Dominus [a prestigious Napa Valley winery owned by winemaker Christian Moueix of Chateau Pétrus in Bordeaux]. I’m a believer in low alcohol; 15 percent is too high for me. When making wine, I come from a food point of view, and I’m careful about reflecting terroir.”

Founded in 2007, Daou Vineyards features many varieties for which Paso has earned acclaim: Bordeaux varieties and blends including cabernet sauvignon, cabernet franc, and merlot; Rhone varieties include syrah, grenache blanc, and roussanne; and they also produce zinfandel and chardonnay. Daou’s vineyards aren’t certified organic, but they are sustainable in that they’re farmed organically. Daous flagship wines are 100 percent estate grown varieties or blends. The 2010 vintage was their first release of the estate wines, which are just being released in the tasting room.

The Daou “Paso Collection” wines are grown in three distinctive regions within Paso, including Adelaida and east and west Templeton. The wines labeled “Reserve” are predominately estate, but blended with the finest of the purchased grapes. Currently Daou has 60 acres of producing vineyards, and they plan to increase them to 120 acres of vineyards once they’ve planted all of the varieties they want to produce. After tasting their excellent line-up of fine wines, I’m confident the Daous will realize their goal. And they’ll be among good company with Paso Robles producers who’ve been making exemplary cabernets for the past two decades.

Although modern winemaking in Paso Robles began in the 1970s, it was two decades before the winegrowing region blossomed as a rising star among California’s finest winegrowing regions. During the mid-’90s many local producers believed that mainstream varieties like cabernet sauvignon and chardonnay were the varieties that would outshine all others. Yet it didn’t happen quite that way.

After the year 2000, Paso Robles attracted many Rhone wine producers, most of whom made small-production, artisan wineries that very quickly captured the attention of the press and wine critics nationwide. But now there’s an uprising afoot that includes Paso’s pioneers and newcomers like Daou who produce cabernet. They’re banding together with a goal of focusing wine connoisseurs’ attention on the outstanding, Paso-grown cabernets and cabernet blends. I’ll report more about the new CAB Collective and their inaugural wine event once there’s more information this spring.

The Daou brothers, who emigrated to the United States in the 1980s, come from a family line of French farmers. Along with the vineyards, they’ve planted 1,500 olive trees to make olive oil, and plan to double the olive tree orchards over the next year. With the recent purchase of Twilight Cellars, 112 acres adjacent to their original 100-acre property, they will be able to grow more grapevines from which they can choose only the finest quality grapes to make their wines. That purchase also provided them with the original Hoffman Mountain Ranch winery, locally known as HMR, built by Paso Robles renowned pioneer Dr. Stanley Hoffman.

The Daous have spared no expense in renovating their historic property, previously known as Hoffman Mountain, which they renamed Daou Mountain. At first appearance that might seem disrespectful to this historic place, but I discovered that’s not true. In fact, everything they’ve done is in admiration of the legacy created by Dr. Hoffman, whose consultant was the eminent winemaker Andre Tchelistcheff. The original winery is undergoing complete renovation.

“HMR was the birthplace of winemaking in Paso Robles,” Daou noted, and he showed me the original HMR sign that will be rehung. The aged wood walls and stairways are being hand-sanded to restore them. The only change will be painting the floor red to match Daous’ new state-of-the-art winery.

Daou Vineyards tasting room, a beautiful example of Spanish colonial architecture with unrivaled views of Paso Robles, features daily wine tasting and their talented chef Ryan Sims who will prepare for you and your guests a “picnic in the sky” (five-day advance reservation required). Sims, previously a cook at Justin Vineyards, prepares a special menu each weekend paired with a selected Daou wine for $20 per person, or you can purchase cheese with wine on a daily basis. The bell over the tasting room, circa 1740, came from a Spanish monastery, which was replicated on the front gateway.

There’s another reason they’ve become so popular among locals and tourists, Daou pointed out: “Adelaida is still a very virgin region, so people come out here to escape. They bring picnics and spend the afternoon here enjoying the views.”