Rally 'round the mural

Friends of the ARTery eat meatballs in support of wall art

I blame an irresistibly delicious plate of spaghetti for the fact that I was kind of slightly an hour late to the official opening of the “Tree Mural” at the ARTery in Atascadero. By the time I got there, the crowd was beginning to dwindle and disperse, but a dedicated few still hung around the snack table near the rear of the art supply store. The wine was gone (curse you, spaghetti!), but the meatballs swimming in barbecue sauce remained. I didn’t mind if I did.

Properly sauced, I introduced myself to Bill Arkfeld, who co-owns the store with his wife, Bobbi Nunez. They had commissioned an artist friend who was passing through Atascadero to paint a massive mural on the west-facing wall of their store, but their after-the-fact permit application was later denied by the Design and Review Committee. The DRC gave them two choices: paint over it or appeal.

“We can’t back down now,” Arkfeld said. “That’s obvious.”

He said that public support of the mural was too strong to just let it go. On the counter, there was a jar stuffed full of cash people had donated to help Arkfeld and Nunez pay the $460 appeal fee. He just couldn’t say no to their smiling faces, and he’s pretty confident the mural will stay.

I asked a young guy in attendance what he thought of the whole issue.

“I saw this driving by and thought it was really cool,” Craig Culp said. “I don’t see what the problem is.”

So naïve, Culp. The problem, clearly, is that the mural utterly destroys the character of the neighborhood, a place where roughly half the businesses are already art-themed. Once you deviate from the historically appropriate design scheme of brown, lighter brown, and white, you’re practically rolling out the multi-colored carpet for roving gangs of meth eaters and dog punchers. That’s the last thing Atascadero needs. 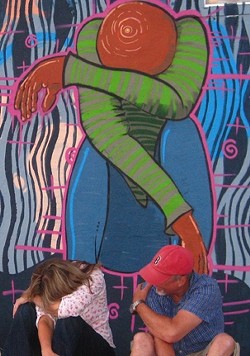 The city has a reputation to uphold. San Luis Obispo has the hip, college-town art thing covered. Paso Robles has its wine, and the coastal communities have their beaches. Templeton’s cornered the idyllic small town atmosphere, so if Atascadero wants to stand out, it has to be the Central Coast’s most boring city, a place as similar to the rest of America as possible with chain stores like Walmart and about as much character as the digitally altered comic strip, “Garfield minus Garfield.”*

Designer David Mellish and I joked about ways to appease the city. Arkfeld and Nunez could paint over this mural with a new one and basically restart the permit process. Do the same thing every few months and the city could never keep up. As a guy who reads a lot of bureaucratic reports, I liked the idea of painting the wall white with the words “[this wall intentionally left blank]” written in perfect Helvetica.

“Atascadero can be so backwards sometimes,” Mellish said. “This is exactly what the city needs.”

As it got dark, everyone but Nunez, Arkfeld, and Heather “Forever” Young** from Atascadero News made their way home. We stood outside, talking about city politics and Arkfeld’s prediction that a few young artists will use the mural controversy to jump into the 2012 council race. Bats circled overhead, chasing strange and scary-looking black bugs. One landed in Young’s hair and was flicked onto the sidewalk.

“Should we kill him?” Nunez asked.

“He’s weird,” Arkfeld said, standing next to that colorful abstraction of a thoughtful figure below a glowing tree. “He should live.”

* Without the cat, the comic is basically just Jon, the world’s whitest douche bag, talking to himself all lonely-like, with no other characters around.

** I have no idea if anyone actually calls her that. But shouldn’t they?