Dawn Addis is one of the organizers of the march; she said this event is supportive of all people who want to stand together for all rights. She saw that the Women’s March was taking place in Washington but she didn’t want to travel and started wondering whether there were other people interested in participating locally. Turns out, there are.

About 1,600 people have registered so far, which is more than Addis anticipated. 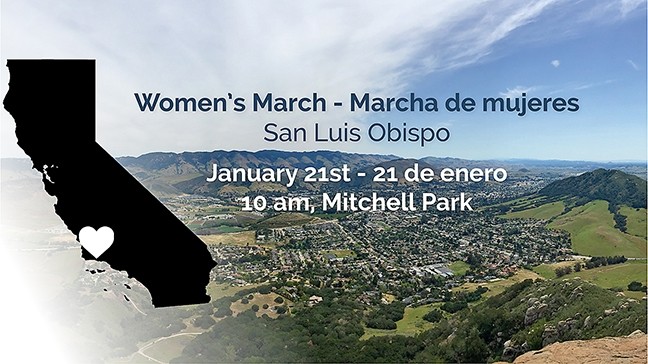 “We’re an active community that wants to support one another and have a positive message to share together,” Addis said. “There’s a lot of local people that want to send a message of unity, a message of support for our communities that feel they don’t have a voice.”

Most importantly, Addis said, is that she wants people to really take notice of who is participating that day. Friends, families, neighbors, and people from other counties or cities will be marching side by side. Addis said she hopes everyone will be cognizant of who they’re connected to because of this collective sentiment.

The event will have speakers including San Luis Obispo Police Chief Deanna Cantrell and president of the Muslim Student Association at Cal Poly, Rubia Siddiqi. There are about 200 sister marches that are taking place all over the United States that day, and this event is one that Cantrell said she can stand behind.

The police chief said she is non-partisan and feels that she represents all people equally. The event calls for inclusion, she said, which is important because “we need to try to get everyone together for the common goal and the common good of our society.”

Cantrell said that this type of peaceful march could be more effective than exclusive protests that have occurred in the past. Although she appreciates people’s constitutional rights to protest or assemble, she said pointing the finger or calling other groups names doesn’t work.

Cantrell is optimistic that people will listen to this message because she said it’s coming from a loving place.

The vision of the Women’s March on Washington, according to its website, is to stand together in solidarity for the protection of the rights of women and humans, safety, health, and families while recognizing the diverse communities that are the pillars of the country.

San Luis Obispo resident Cynthia Saffell heard about the march in Washington, D.C., shortly after the results of the general election this past year. She said she was quick to get her plane ticket and be a part of this movement.

“I think it’s absolutely unacceptable that the loss of human rights are on the horizon, and I think we need to stand up and say something,” Saffell said.

Exercising her right to freedom of speech is something that Saffell has experience with. As a teenager in the ’60s, she participated in a peaceful protest in Detroit against the Vietnam War.

“It didn’t have immediate results, but it did start to change things,” she said.

Saffell said she’s excited to go to Washington and send this very powerful message to the president-elect and the government.

The Women’s March in San Luis Obispo will start at 10 a.m. in Mitchell Park. Organizer Addis said that they encourage people not to bring negative signs or anti-sentiment posters, as this is an inclusive peaceful protest for everyone. They are looking for volunteers to help clean up the park before and after the event; visit womensmarchslo.com for more info.

• After 25 years of serving locals and tourists, Hands Gallery established by Tres and Debra Feltman in Downtown San Luis Obispo is changing ownership. They sold the gallery to longtime manager Sara Vaskov.

• Vibrant orange and black monarch butterflies are back at the Monarch Butterfly Grove with daily talks from 11 a.m. to 2 p.m. The grove is located on Highway 1 just south of Pismo State Beach; admission and parking are free.