A departing staff writer drops some truth nuggets, flushes his career down the tubes

Four years ago, I stumbled into journalism almost on accident. Several drives—namely, my hopelessly egotistical dreams of writing the ninth Great American Novel,* my empty bank account, radical politics, and a family that stubbornly refused to eat knock-off Captain Crunch for every meal—were satisfied under one heading in Cuesta’s course catalog: Jour 202A, Intro. to News Production.

I was already a decidedly dope writer with a fiery passion for denouncing corruption. With my tiny, tiny brain, I thought, “What could be easier and more fulfilling than getting paid, in dollars (eventually), to call out politicians on their wacky shenanigans?” 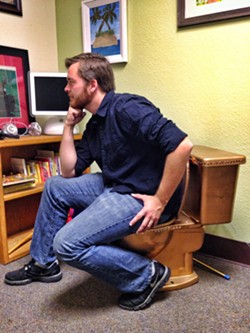 So I signed up, and I’ve been hooked ever since the first time I saw some random students sitting in the cafeteria slopping their Joes all over my insightful critique of bathroom vandals. Journalism got me high in ways I never thought possible. That youthful sense of self-importance inflated tenfold when I got to know important campus officials on a first-name basis, and racing against deadlines with triple-shots of caffeine coursing through my veins made me feel like some kind of hero, saving the day by telling people what happened during it.

But I was young then, with a goatee as pitiful as my naïve first impressions of the news industry. I’ve learned some things since graduating to real paper, and now seems like a good time to share them. It’s been grand, but I’m leaving San Luis Obispo County and will be taking a much needed break from the reporting gig. Here are some departing thoughts:

I’m not that great

Four years of journalism humbled the crap out of me. First, I’m not the world’s next Shakespeare. I may have been one of the best writers in a Podunk town where none of my peers were trying to be authors, but I can barely hold a candle to my coworkers at New Times. They’re insightful, clever, and quick, and competing with them made me better than I was before, but I’ve got a long way to go before challenging the Bard.

Second, I interviewed countless people in this county who have persevered against incredible odds, people with more determination and strength of character than I could ever hope to muster.

And finally, much to the relief of everyone I know, I can’t be the opinionated asshole I used to be. People say there are two sides to every argument, which is true, but I’ve also learned that both sides are usually right. Your intellectual opponents are rarely evil or stupid. Being a reporter means considering both views, and the people behind both sides are usually rational and well meaning. Keeping that in mind could make all debates much more productive.

People will get offended

Some of my fluffiest articles generated fierce and unexpected reactions from whole groups of people that I managed to piss off with a passing phrase. A review of a film festival infuriated an entire religion, and runners, sea glass collectors, and gym owners apparently hate me.

So … sorry everybody. I use a lot of sarcasm in my non-news writing, but I’ve never employed it maliciously. I totally admire the religious community in question and only expressed jealousy of the runners and sea glass sellers. I still don’t really understand how the gym owners were offended when I suggested that out-of-shape gamers could benefit from a membership at their club, but what can you do? With 100,000 people reading the paper, someone out there will always find a reason to get mad and complain to my boss.

No one controls ‘The Media’

During my first year at New Times, I’d show up every morning sure that it would finally be the day I get initiated into the smoky room where The Media overlords tell me which stories to write and how to write them, but it never happened. As it turns out, individual reporters decide what to write, and their editors work with them to make sure all points of view are included and that all the facts can be backed up. That’s how it works.

I’ve been accused of caving to the pressures of advertisers or even the government for ignoring a “story” or stopping my coverage of others, but no one has ever forbid me from covering anything, and no one’s ever told me to go easy on anybody.

If I stopped covering your story, it’s because I felt everything had been said on the issue, or I got the impression that our readers didn’t care. Sorry, I know that’s not as interesting as the big media conspiracy theory.

In a lot of ways, this was the best job I’ve ever had. My co-workers were all fantastic; I got to meet and interview a ton of interesting people; and I never had to do any hard labor. But with that said, being a reporter is pretty damn dull. Seldom was I out in the field investigating dark corners of the county. I spent most of my time behind a desk either on the phone or combing through statistics, budgets, and court reports. Without fail, Tuesday evenings meant public meetings, tedious affairs that lasted several hours and usually supplied just a few hundred words of content.

Then there’s the homework. Newsrooms don’t have punch clocks, because news can break at any time and reporters are always on call. With cell phones, sources are only ever a few digits away, and there’s always more information to gather and another deadline looming.

Reporters are know-it-alls (kind of)

This is the only job in the world that demands proficient knowledge in a different subject every other day. In one week, you’ve got to explain how the county’s land-use element applies to rural fundraisers, why sewer rates are going up, who financed a city council candidate’s campaign, court procedures, water rights, jail conditions, and school budget cuts. You have to understand everything well enough to explain it to readers and make the boring stuff entertaining, to boot. It’s a lot to keep track of, and mistakes are inevitable—for me at least.

Luckily, the folks who get to dedicate their careers to single subjects are usually kind enough to guide overwhelmed reporters through the murky details and gently remind them when corrections are necessary.

Reporters might rub shoulders with city managers, department heads, lawyers, and developers who all pull down six-figure salaries, but we live in different worlds. In my world, the student loan doesn’t get paid this month because a tooth got drilled. My stylish outfits come almost exclusively from Ross, and an extravagant evening out includes splitting a meal with the wife and stopping off at Red Box.

I get by, but a job this stressful and time consuming, one that essentially makes democracy possible, ought to be a head of household job, don’t you think?

I’m not hanging up my press pass because I found a better paying job. I’m leaving because my wife had the good sense to pursue a practical career and was accepted into a faraway school’s degree program, and it might lead to a better paying job two years from now. After four years of bashing my brains against the stories that make up SLO County, that’s all it took to pull me away.

* There’ve been eight so far: Melville’s Moby Dick, Helprin’s Winter’s Tale, Rand’s Atlas Shrugged,** Hemingway’s A Farewell to Arms, Faulkner’s The Sound and the Fury, Sendak’s Where the Wild Things Are, Heller’s Catch-22, and McCarthy’s Blood Meridian. End of list.