I've been listing to Chi-Town rap-poetess Noname's Tiny Desk Concert on NPR, and her vibe immediately makes me think of the jazz rap of Digable Planets but with more of a political punch.

The rap reflects the reality of Chicago's notorious reputation for violence and the disproportionate brunt of that violence that falls on people of color.

A lot of her lyrics examine the underbelly of American culture, such as "Yesterday": "And I know the money don't really make me whole/ The magazine covers drenched in gold/ The dreams of granny in mansion and happy/ The little things I need to save my soul."

In the song's verses, "Yesterday" becomes more impressionistic: "With fine wine and ecstasy, you can have the rest of me/ Basket case silhouette, cigarette, internet/ Check my Twitter page for something holier than black death/ Who am I? Gypsy black/ the vacancy hallelu/ Me hollow in interviews/ Me only wearing tennis shoes to clubs with dress codes/ Cause fuck they clubs/ Everything is everything/ me Noname, you niggas doing cocaine/ Me missing brother Mike, like something heavy/ Me heart just wasn't ready; I wish I was a kid again."

As a high school senior, she placed third in "Louder Than A Bomb," a 120-school, Chicago-wide poetry competition. Her break into the music scene came when she lent a verse to Chance the Rapper's 2013 track, "Lost." In 2016 she released her first mix tape, Telefone, and she followed up last year with her first studio album, Room 25, which she self-released as a digital download.

She's been garnering gushing reviews from a wide variety of media, and Lauryn Hill tapped Noname to open for her on tour.

Noname plays the Fremont on Wednesday, Feb. 20 (9 p.m.; 16-and-older; $33.17 at Boo Boo's or fremontslo.com). Elton—who started as a member of Art of Cool, a multi-instrumentation jazz/hip hop group—opens the show.

Numbskull and Good Medicine Presents have three solid shows teed up at The Siren this week, starting with excellent Led Zeppelin tribute act Led Zepagain on Friday, Feb. 15 (7:30 p.m.; 21-and-older; $20 presale at Boo Boo's and ticketfly.com or $25 at the door).

For the past 15 years, they've given Zep-hungry fans a taste of the famed rock band's prime years, re-creating the band's blues, psychedelic, folk, metal sound. Much of the band's success is due to lead singer Swan Montgomery, who hails from Drogheda, Ireland, and captures Robert Plant's signature vocals. 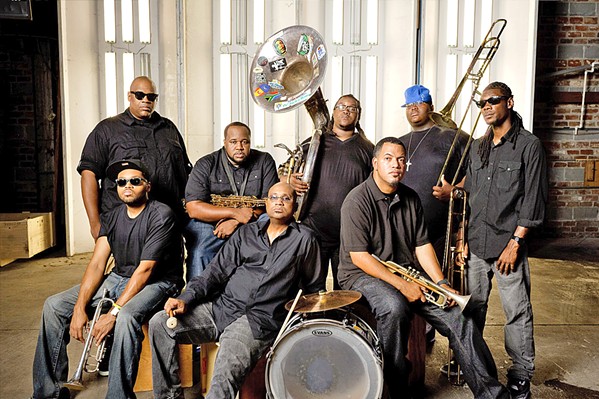 Incredible New Orleans brass band The Soul Rebels play The Siren on Sunday, Feb. 17 (7 p.m.; 21-and-older; $17.50 presale at Boo Boo's and ticketfly.com or $20 at the door). They received national attention with their amazing Tiny Desk Concert as well as their appearance on The Late Show with Stephen Colbert.

White Buffalo, who's become a touring favorite in our area, returns to The Siren next Thursday, Feb. 21 (7:30 p.m.; 21-and-older; $18 presale at Boo Boo's and ticketfly.com or $20 at the door). This big bear of a man—he calls himself "a big white motherfucker"—is an incredible storyteller in his music. 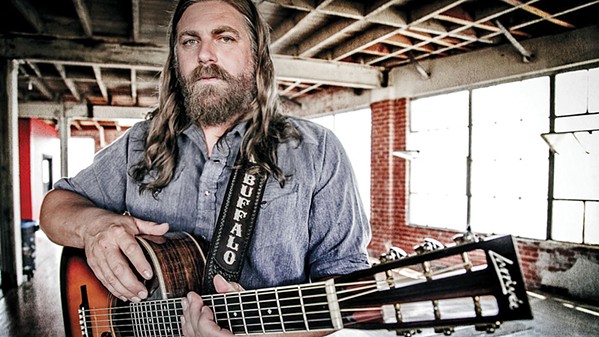 "I've always loved the combination of things that are really beautiful and things that are really dark or heavy," Jake Smith—singer, songwriter, guitarist, and sole charter member of the White Buffalo—said in press materials. "I hear all kinds of stories from people who say that the songs helped me get through stuff. I have all these veterans who've come up to me and said that the last album helped them through hard times. As a songwriter who's trying to write stuff that hits people in a real way, it's pretty powerful to hear that kind of thing." 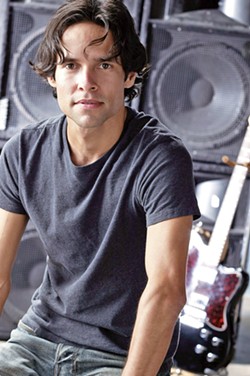 Just in time for Valentine's Day, local R&B artists Damon Castillo and Morgan Monroe have teamed up to record "No One Like You," which will be officially released on Thursday, Feb. 14. Check Castillo's webpage for info: damoncastillo.com.

"Valentine's Day is fast approaching, and so it's only fitting that I release my new single 'No One Like You,' a romantic R&B duet that features the impossibly lovely voice of Miss Morgan Monroe," Castillo wrote in an email. "I heard her captivating tone about a year ago while we were sound-checking at the historic Fremont Theater and fell instantly in love with the sound of it. As soon as 'we should do a song together' left her lips, I retreated to Laurel Lane [Castillo's recording studio] to write a tune enchanting enough to inspire lovers everywhere."

The song features drummer Sean Sullivan with Castillo adding sounds from "a Fender Mustang Bass strung up with flatwounds, a pair of Strat guitars, a Mellotron, and Wurlitzer 200A Electric Piano."

It's a gorgeous song!

"Lyrically, I wanted to capture that moment when love first hits," Castillo added, "when you are both awakening to something and yet entering a dream."

Here are some of the lyrics: "When you talk to me, I hear music/ When I look at you, I see art/ Want you to know me, don't want to lose this/ This sweet hurting in my heart/ There's no one like you."

Castillo recommends you "put the song on, look into the eyes of your love, then slow dance on the kitchen floor like you mean it."

Damon Castillo plays a post-Valentine's Day show at Bang the Drum on Friday, Feb. 15 (7 p.m.; all ages). Feed My Seoul, a Korean-style barbecue food truck, will be on hand. No word on whether Monroe might show for a duet.

The always fun (and weird) metal mariachi band Metalachi plays the SLO Brew Rock Event Center on Friday, Feb. 15 (7 p.m.; 18-and-older; $20 at Boo Boo's and slobrew.com). If you like mariachi versions of classic metal songs played by costumed rock stars, this is your show!

Sixties-style rock band Unfinished Business will perform their "55th Anniversary Celebration of The Beatles American Debut" show on Saturday, Feb. 16, at Mongo's Sports Bar in Grover Beach (7 p.m.; $10 presale at my805tix.com or $12 at the door; advanced ticket holders get a $5 credit on food!). Expect to hear more than 40 classic Beatles songs! The SLO County Jazz Federation presents NYC-based jazz pianist Emmet Cohen and his trio in concert on Tuesday, Feb. 19, in the Unity Concert Hall. This awarding-winning musician frequently plays with Ron Carter, Benny Golson, and Kurt Elling. Bassist Russell Hall and drummer Kyle Poole join him in this concert (7:30 p.m.; all ages; $11.49 students and $27 general at Boo Boo's and my805tix.com).

Irish duo Tommy and Saundra O'Sullivan will appear at the House Concert in Cambria this Wednesday, Feb. 20 (7:30 p.m.; $20 donation requested with 100 percent going to the performers; call or email Terri for reservations and info at (805) 835-1772 or tlskeoch@att.net). Tommy is acclaimed as "one of the great contemporary folk voices of Ireland" and a "stellar guitarist," according to press materials. Saundra brings a strong background in choir and folk singing. Δ