Trench Town, a neighborhood in St. Andrew Parish near Kingston, Jamaica, is the epicenter of ska, reggae, and rock steady music, and its most famous resident—Bob Marley—became the first international superstar of the genre, bringing reggae to every corner of the world. 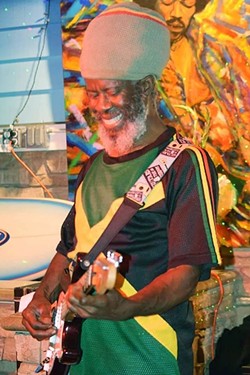 Though he passed nearly 36 years ago, Marley is still the measure upon which all other reggae music is compared, and with his birthday approaching on Feb. 6, Marley tribute season is in full swing.

Marley would have been 72 this coming Monday, so in celebration, another Trench Town native who now lives primarily in San Luis Obispo—Derrick “Ras Danny” Reid—will host his annual Trench Town Tribute show on Friday, Feb. 3, at Frog and Peach (10 p.m.; 21-and-older; free).

Ras Danny grew up in Trench Town as reggae was being invented. Raised in a music-filled Christian home with five sisters, he names Marley and Nat King Cole as his inspirations for his own brand of socially conscious, lyrically positive reggae. Marley, in fact, was the manager of Ras Danny’s band Earth Disciples.

“Bob Marley was, to me, a teacher,” Ras Danny recalled. “When Bob Marley passed off, a group of us in Trench Town did the first Bob Marley tribute show. The next year his wife and mother joined us, and it’s been going on ever since.”

After Marley succumbed to cancer on May 11, 1981, Ras Danny and a few others, including Errol Organs, started the annual Trench Town Bob Marley Birthday and Life Celebration at Trench Town Culture Yard in 1982.

Though he’s lived in SLO Town for decades now, Ras Danny stays connected to Trench Town through his philanthropy, which brings musical instruments and music lessons to Trench Town’s youth.

As noted in press materials, “Education and inspiration are his goal to liberate them from gun violence. His music room is located in Bob Marley’s Trench Town Culture Yard on First Street near Ras Danny’s Jamaican home. The youths learn music, rehearse, and perform reggae music. Before Bob’s passing, he had instructed Ras Danny specifically, so through this Ras Danny has selflessly taken instruments to Trench Town.”

For his Trench Town Tribute, Ras Danny is bringing in his touring band the Reggae All Stars, a band that backs Black Uhuru and Lee Scratch Perry when they’re not doing their own tours. They also backed Ansel Cridland of the Meditations at Reggae on the River.

Marley may be gone, but his music lives on and his positive inspiration continues to reverberate through the music world. Come celebrate with Ras Danny and the Reggae All Stars.

After Good Medicine Presents and Numbskull Productions host hipster string band The Brothers Comatose this Thursday, Feb. 2, at Fremont Theater (7 p.m.; all ages; $18 presale at Boo Boo Records or ticketfly.com or $20 at the door), they’ll turn their attention to two tribute acts.

The Abba Show—The Ultimate Abba Experience, an Abba tribute act from Europe, brings all the Swedish band’s pop hits to the Fremont Theater this Friday, Feb. 3 (7 p.m.; all ages; $15 presale at Boo Boo Records and ticketfly.com). “Dancing Queen,” “Take a Chance on Me,” “Waterloo,” “Mamma Mia,” and “I Do, I Do, I Do, I Do, I Do”—you’ll hear them all.

And the tribute acts keep on coming on Saturday, Feb. 4, when The Everly Brothers Experience presented by The Bird Dogs comes to Fremont Theater (6:30 p.m.; all ages; $25 to $40 at Boo Boo Records and tickeyfly.com). “Cathy’s Clown,” “Bird Dog,” “(’Til) I Kissed You,” “Crying in the Rain,” and “When Will I Be Loved” are just a few of the brothers’ massive hits now performed by The Zmed brothers, Dylan and Zachary. 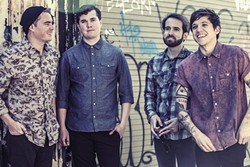 Classic house and techno on the pier

According to organizer Roe Pressley, the restaurant at the end of the pier “converts really nicely to two separate party areas. The music is primarily house and techno of the classic sort, not so much the bandwagon EDM of the last five years. I’m integrating drum machines and synths to integrate into my set, as will Brandon Heinz, who’s pretty big in the SoCal techno circuit, and headliners Plus Size Models are joining us from Detroit with some gear as well so it won’t just be the typical DJ setup all night.

“New Year’s Eve was absolutely wild at Olde Port Inn and the unique venue was a big part of it,” Pressley added. “We all channeled a vibe and energy that’s hard to attain at the outdoor, DIY renegades, or the Ranch (which are two common go-to options for these sorts of parties).”

The evening will also include performance art and DJ sets by locals dj.sparx, Swee2th, Michael St. Patrick, and PJ Anthony. 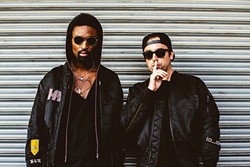 NYC electronic duo The Knocks will perform at the Graduate this Wednesday, Feb. 8 (9 p.m. doors; 18-and-older; $20 presale on ticketfly.com), for part of their Feel Good Feel Great tour. Their newest dance hit is “Trouble (featuring Absofacto),” the first single from their new EP Testify, due for release on Feb. 3, on Atlantic/Neon Gold Records. The EP is a follow-up to their acclaimed debut full-length 55, which featured guest artists Carly Rae Jepsen, Fetty Wap, Magic Man, Walk The Moon, and Wyclef Jean among others

The duo, which met as 19-year-old college students, was tapped to support Justin Bieber’s European leg of his Purpose tour with their “warm, retro-future, disco production,” press materials note. “Ben Ruttner, known as ‘B-Roc,’ DJed clubs as a PM day job, and James Patterson, known as ‘JPatt,’ played the organ at a church outside the city. Both in need of roommates, they moved into an apartment on Avenue C in The East Village that—in the DIY style that would go on to define their work in the industry—the two of them soon turned into a bootleg studio where rappers and bright-eyed vocalists came in to cut tracks. It was a tiny place, with walls as thin as the bugs were plenty. Their neighbors started banging brooms floor to ceiling, cracking knuckles on the walls. When the music got loudest, B-Roc and JPatt would go into each other’s rooms and say, ‘I just got the knocks.’”

A name and an act were born.

Guitar master Dorian Michael will play a mix of instrumental guitar music, from lyrical originals to jazz standards to down-home blues, during the next First Presbyterian Church’s brown bag concert this Friday, Feb. 3 (noon; all ages; free), in Wilson Hall of the church’s downtown SLO location.

The Cal Poly Brass Ensembles will host Phil Snedecor, principal trumpeter for the Harrisburg Symphony Orchestra in central Pennsylvania, for a free, open-to-the-public master class from 2:10 to 4 p.m. on Friday, Feb. 3, in room 216 in the Davison Music Center (building 45). He’s toured throughout Asia, Europe, and the U.S., and he’ll be featured in the SLO Symphony’s Classics in the Cohan 3 series this Saturday, Feb. 4, in the Performing Arts Center (8 p.m.; all ages; tickets at 756-4849 or calpolyarts.org), when conductor Nan Washburn guides compositions by Mussorgsky, Hummel, and Dvorak.

Unfinished Business will bring their Beatles tribute show to SLO’s Guild Hall this Saturday, Feb. 4 (7 p.m.; all ages, though those under 18 must be accompanied by an adult; $15 presale at Boo Boo’s and brownpapertickets.com or $20 at the door). Expect to hear music from “early performances in Hamburg in the early ’60s, through the ‘British Invasion’ era, and then from their innovative and widely influential albums later in the ’60s, including hits from their Abbey Road album in 1969,” according to the band.

Also on Saturday, Feb. 4, acclaimed jazz act The Metta Quintet plays Cal Poly’s Spanos Theatre (8 p.m.; all ages; $24 general admission or $12 for students, at 756-4849 or calpolyarts.org). “The ensemble is as dedicated to blazing new artistic territory as it is to cultivating new audiences and fostering a greater overall awareness, understanding, and appreciation of the great American jazz tradition,” according to press materials. Expect some “fiery selections of original material, jazz classics, and popular standards.”