Party with no pants on

Proceeds from RawfeyL Gene Burge's art show, Raw Dick Picks, will go toward the transgender artist's bottom surgery. The exhibit will be on display at the GALA Center Gallery through Oct. 15, with a reception on Oct. 6 from 6 to 9 p.m. For gallery information, visit galacc.org.

Growing up there was one thing RawfeyL Gene Burge really wanted but was told he could never have: a penis. 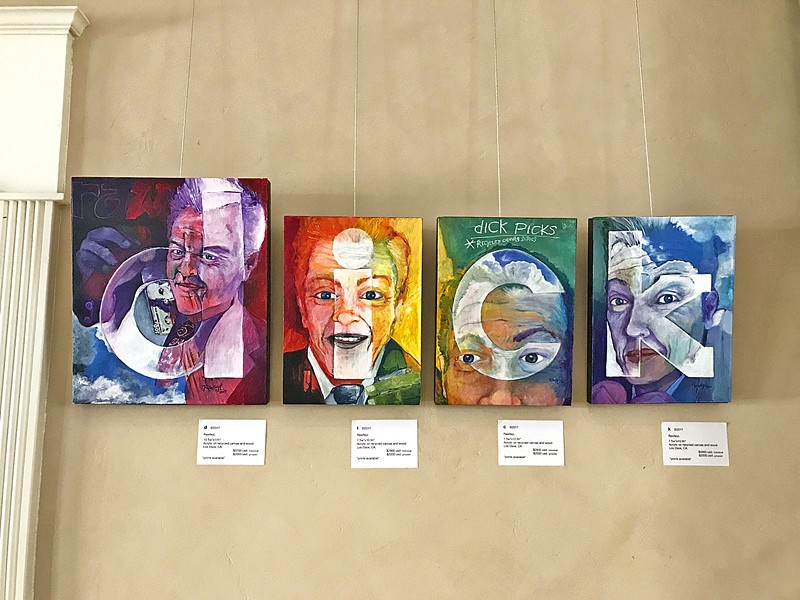 This was in the 1960s in Texas and RawfeyL was born a female. At that time, surgery for gender reconstruction wasn't really an option like it is now.

Today, the 50-something Los Osos artist is happily living as a trans man and even worked as a background actor on the Amazon show Transparent. In 2014, he parted ways with painfully large breasts. The surgery cost around $10,000 and was paid for by RawfeyL's friend and local Cambria author Catherine Ryan Hyde. In an effort to truly live as himself, the artist is now looking to have what's commonly called "bottom surgery," to construct male genitalia. That'll cost a lot more than top surgery, around $80,000, but this time RawfeyL is planning to raise the money himself.

His art show, Raw Dick Picks, is currently on display at the Gay and Lesbian Alliance Center Gallery in downtown San Luis Obispo through Oct. 15, and about half of the pieces prominently feature, you guessed it, penises. RawfeyL's work features paintings on recycled canvases and multimedia pieces made from everyday objects.

"Like me," RawfeyL said. "I'm recycling my body. I'm making dicks until I'm done. I move on as an artist and as myself."

That is to say, once he's raised enough money for bottom surgery, the penis-inspired art will come to a halt. He did the same with his breast-inspired art that explored his desires and decision to have them removed. Those older pieces make up the second half of the show and include a series of bras made from glass and wire, one of which resides in Ellen DeGeneres' personal collection.

While some of RawfeyL's pieces are more whimsical than others, they are all definitely dicks, there's nothing abstract about them. One of the more blatantly simple pieces, Surfboard, is a painting on a recycled canvas that shows the chest, torso, and erect penis of a surfer sitting on his board in the ocean.

Another piece, PlasDicks, features a series of rainbow colored phallic objects made from recycled containers of laundry detergent and shower poofs. RawfeyL said he made that piece with a particular buyer in mind: comedian Chelsea Handler, after she delivered a hilarious rant when a stranger sent her an unsolicited dick pic. In said rant, Handler posed the eternal question that all women ask: "Why does this keep happening?" No one knows, Chelsea, no one knows.

"Now I'm really into making clever statements," RawfeyL said. "The dicks are just a tool to talk about something."

While the art on display represents RawfeyL's past, present, and much longed for future, he also plans to make one last piece when his gender reconstruction surgery is complete.

"It will be all me, the real me, with no missing parts," he said.

After the show wraps up in SLO, RawfeyL plans to take the exhibit to Los Angeles, and possibly even spots in Colorado, Seattle, and Portland, where he hopes to partner with universities and talk to students.

"I think you can be anything," RawfeyL said."You shouldn't be anyone else's expectation of you. What makes you better and happy?" Δ

Ryah Cooley, like all women everywhere, has received an unsolicited (and unwanted) dick pic. Contact her at rcooley@newtimesslo.com.