My hands are gripping tight around the bar, and I’m trying really hard not to look down. Supposedly, there are only about 28 feet of air between my feet and the ground, but it feels a lot higher than that as I mentally prepare to jump and swing on the flying trapeze at Circus Vargas, which will be in the field by San Luis Obispo’s Madonna Inn through July 11.

I can’t back out now—I already tried. The iron table where you grab the trapeze seems to float without support, and to get up to it, you first have to climb up a long, narrow hanging ladder that sways with every movement. I made the mistake of looking down as I climbed up what I like to call the “ladder of death” and bailed. The instant I touched back down to the ground I regretted it, so here I am again. Take two.

“Do the flying trapeze for your article, Ryah, it’ll be fun,” they said.

“But Ryah, you’re an aerialist, you’ll be fine,” they said.

As an aerialist, it’s a tad embarrassing to have such a visceral reaction to heights. To be fair: I do aerial silks, a more static form than the flying trapeze. As long as I wrap myself up in the fabric the right way, I’ll be fine. There are no free falls on the silks, only controlled drops. Here, where I stand closer to the big top of the circus tent than not, this swing followed by a free fall onto a net seems brazen. Normally, a newb like myself would be strapped onto a harness or safety lines, but that’s not set up today. Yay! 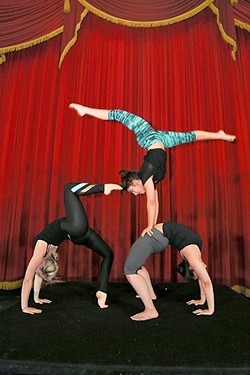 The two trapeze experts on either side of me instruct me to make a hollow body as I swing back. I’ll swing several times and when they give the call I’ll let go.

And my feet are no longer touching anything as I’m swinging many feet up in the air on the flying trapeze. It feels weirdly zen and cathartic until I’m given the verbal cue to fall. I let go of the bar, arms dropping to my sides as I fall toward the net. The free fall isn’t bad until I hit the net. I bounce back a lot more than anticipated, at least several feet. I hit the net a second time and bounce again. This freaks me out so my arms flail about and I grab for the net, a rookie mistake. This causes me to flip over a rotation or two. Finally the net grows weary of toying with me and I lie still, breathing.

When I make my way off the net, Alberto Marinelli, one of the co-owners of Circus Vargas and resident trapeze expert, casually informs me that I could have lost a finger by grabbing the net the way I did. Oh.

I still have all my fingers. I also have less skin and two big red burns from the net on each of my elbows, but the adrenaline from the flying trapeze distracts me. It takes me a few minutes to notice the stinging on my arms. 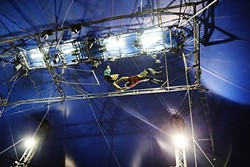 I feel better when professional trapeze artist Mariella Quiroga tells me she hates climbing up the ladder too.

And that’s saying something, since Mariella was born into the circus life. Her parents, Katya and Nelson Quiroga, are now co-owners of Circus Vargas. They met there in the late 1980s. Katya came with her parents, performers from Holland. Nelson was a flying trapeze artist from Argentina.

Katya, a former ballerina, ended up training on the flying trapeze as well, and the two went on to be partners in the ring and in life, starting a family that would add three daughters and circus performers to the act. Katya and Nelson traveled the world, performing on the flying trapeze for companies like Ringling Bros. Circus. In 2005, they returned to where it all started and bought Circus Vargas.

I watch the real flying trapeze artists gracefully swing: One releases the bar and safely grabs onto the hands of another trapeze artist hanging upside down on an adjacent bar. It’s just one of many acts in the iLuminous show, which features performers in glow-in-the-dark costumes. There’s Ukrainian gymnasts swinging to and fro on three horizontal bars; a Chilean duo of roller skating artists that are chained together; a breathtaking aerial strap duet featuring Patrick Marinelli, who appeared on America’s Got Talent; a trio of dancing contortionists; and more.

Last year, after more than 25 years of flying high, Katya and Nelson retired from their trapeze act. Now they run things from behind the scenes and work to build the next generation of circus performers.

“It’s more stressful than when you perform,” Katya said. “But it’s fun because you’re making other people’s dreams come true, too.”

Ryah Cooley is running away to the circus at rcooley@newtimesslo.com.