LGBTQ residents of SLO County ages 14 and up can participate in the mental health needs assessment survey and focus groups by going to queercares.com.

As San Luis Obispo prepares to celebrate Pride in the Plaza, one Cal Poly professor along with a group of students and community members are gathering data for a comprehensive look at the mental health needs of the county’s LGBTQ population.

Cal Poly Assistant Professor Jay Bettergarica is currently leading a months-long research project to create a mental health needs assessment for SLO County’s LGBTQ Community. Funded by the county’s Behavioral Health Agency, the study will be one of the most detailed and wide-ranging studies of the mental health needs and available services for LGBTQ individuals.

The study will gather information on common mental health concerns, access and barriers to mental health services, and positive and negative experiences with those services. It will also explore issues of minority stress, internalized stigma, and “overall wellness and resilience” for LGBTQ people in SLO County, according to a description of the project on Cal Poly’s website.

The National Alliance on Mental Illness (NAMI) says that LGBTQ individuals experience more negative mental health outcomes due to the prejudice and bias they encounter. LGBTQ individuals are almost three times more likely to experience a mental health condition like generalized anxiety disorder or major depression. In addition, fear of coming out and being discriminated against can lead to depression, suicidal ideations, substance abuse, and even post-traumatic stress disorder, according to NAMI.

As part of the study, Bettergarcia hopes to learn if similar barriers exist in SLO County, and more broadly, if the LGBTQ community feels connected, welcome, and supported.

“If we are going to be serious about taking care of people’s mental health and wellness, we need to look at communities that are disproportionately impacted by these issues,” Bettergarcia said. “The queer community is one of those.”

The study is being carried out in two phases. The first, currently ongoing, is an online survey and questionnaire, which is available in both English and Spanish. Next, the team will conduct multiple in-person focus groups of between six and eight people per session. A group of students and community members is assisting Bettergarcia with the project.

The goal is to hear from as many in the LGBTQ community as possible, gathering data across a wide range of age groups, ethnicities, and locations within the county. 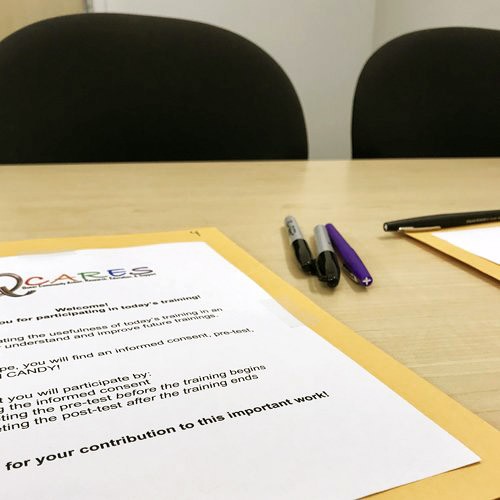 Once all the data is gathered and analyzed, it will be presented to the county, which is funding the study with money provided through the state’s Mental Health Services Act. Nestor Veloz-Passalacqua, an administrative services officer for the county’s Behavioral Health Department said the assessment’s findings could lead to changes to, or the addition of, programs and services that address any gaps or needs it identifies.

“We want to know what we can do better to provide for those services countywide,” Veloz-Passalacqua said. “We want to be proactive in finding out just what this community needs.”

Bettergarica also wants to see the research from the study used to improve mental health services for LGBTQ people in the county.

“I don’t want this data to just sit in an Excel file and that’s it,” Bettergarcia said. “I hope it can create some real programmatic changes.” ∆