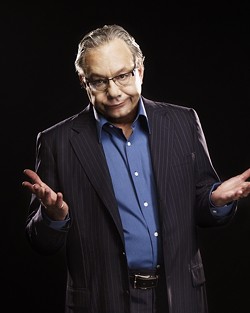 Comedy Central darling Lewis Black will be regaling audiences at the Performing Arts Center with his rage-fueled observations on politics and culture—mostly politics—on Sept. 12. He took the time to speak to New Times about political fatigue, idealism, and why it’s OK to live with five other people.

NEW TIMES Do you ever get tired of politics?

NT Ever think ‘crap, I’m tired of being angry’?

LB I just don’t know what other response you’re supposed to have. I don’t think you can respond like ‘oh, well that’s good.’ Yeah, I’m tired of it. I’m not tired of being angry though. I’m tired because my job is to be crazier than the people I see governing us and now they’ve pushed me to the limit.

LB They’re closing in on it. When you get people running for the presidency who appear to be fictional characters, yeah. And you go ‘wow, I really wish I’d written that character.’ I mean, how do you get beyond the satire they’re providing?

NT I was listening to the commencement speech you made at UCSD and you kinda took a swing for idealism. Do you count yourself among the idealists ... ?

LB Yeah, yeah, I’m an optimist and an idealist. That’s where my frustration comes from. I keep thinking ‘this is not difficult.’ None of this is brain surgery. The entire country acts as if they’ve woken up every day and lost their car keys and can’t find them.

NT For the sake of novelty, is there anything that makes you happy, like the laughter of kittens or bubblebaths?

LB Dinner with friends and listening to other people talk and playing golf, sadly I consider that sad happy, but it helps me get away. Reading a good book.

NT Do you find that people expect you when you’re offstage to maintain the angry persona?

LB No. Some of them do. But most of them get it. They’re very nice.  My audience has an extraordinary amount of etiquette. They’re always like ‘I hate to bother you,’ ‘I hate to invade your space.’ And I don’t know if that’s because they’re polite or because they’re afraid of you.

NT It doesn’t hurt to have people a little afraid of you.

LB A little. If I was who I was on stage all the time I’d be dead.

NT If someone were to hand you the keys to the White House, ‘hey, here you go.’ What would you do with them?

LB I’d give them to my mother and say, ‘have a good time.’

NT Is there any subject matter you just can’t or won’t take on?

LB I can’t really, except for coming at it from odd angles, talk about abortion. It’s just not worth it. The audience gets too crazy. You can’t discuss it at a supper so to do it in front of 1,200 people, somebody’s gonna snap. Somebody’s gonna have feelings on such a level that you’re not really gonna be able to get through it. I’ve talked about it. I’ve talked around it, the special before this last one. I talked about how you say the word ‘abortion’ and the room goes silent. It’s more powerful than the word ‘fuck.’

NT It feels like that’s going to be the case for a while to come.

LB It will be. Because a lot of it has to do with religion. They believe that life begins at A and we don’t really know. It’s that whole thing. At times I just wish that kind of concern was directed to the living that were having amazing problems already. Your concern for the unborn, I get it. I can understand people being upset by it. But if we can’t treat those who are already living and breathing and wandering around properly, I just think there’s a list. You know. Start with the living and the ones with problems and you work your way through, and that’s just me. I don’t care if other people agree with me on it. That’s what I believe. And that’s what you get for living in a democracy, a place that believes in freedom. If you’re free then people are gonna do things that freak you the shit out.

NT What do you credit the rise in religious influence in politics to?

LB A great place to organize. You don’t have to do a lot of work. You know what they’ll go along with. That and the fact that you have a group of people who are my age and older and they’re dinosaurs and can’t get over the fact that they’re going to be leaving and things are not gonna stay in place the way they want. Because time marches on and we evolve and a lot of things are happening that they never expected to happen and we’re listening to the last wails of dinosaurs. For those of you who missed the dinosaurs going extinct, this is your chance and it’s thrilling to watch. If I can learn to live with this shit, then they can learn to live with it. I’m no happier about it. But I’m not trying to put my nonsense on them. Yet sometimes when I’m on stage and they get upset with me as if I had a tremendous influence. And I don’t. I’m appearing in front of 1,200 to 1,500 people a night. Get a grip.

NT You didn’t think you have a tremendous influence, or an influence of any magnitude?

LB Nah. I think I help people kinda get away from it. Hopefully I provide some insulation from the insanity so that they can step back. That’s what I think. If I do anything. That’s why I was so glad to be able to speak to the kids because they actually can still hear.

NT Yeah. I watched the video and it seemed they were very enthusiastic, especially when you told them to do what they loved and not what their parents wanted them to do.

LB Well, that’s vital. That’s the reason I’ve always wanted to speak at a college. It’s one of the most important messages you can get through to a child. Because your parent doesn’t own your life. They’re great as advisers. Like I said, they pay for your education at times, they pay for your survival for 21 years. They did not pay to live your life. That’s the life they want to live; let them go live it. That’s not your responsibility.

NT If someone told you when you were a kid that you were gonna go onstage and just rant about whatever’s pissing you off and people would pay you for it, what would you have thought?

LB I’d have thought they were crazy. That the chances of that were minimal at best. That was the last thing I would have expected. I thought I would teach theater.

NT Is that something you’d still like to do?

LB I don’t know. I’m actually trying to figure that out now. I’ve been doing this for awhile but I’m thinking what else would I like to do next? Do I really want to wander around the country in my 80s? I’m not sure. I’d like to continue to work in theater in some fashion. But I’d like to teach standup in some fashion. I’d like to write.

NT What was the process of writing like for you?

LB You’ve got to sit down and write. And what I learned was you keep writing. I used to think you had to get up and think about stuff. And you don’t. You have to sit there and write such shitty stuff. And as you’re writing shitty stuff, you’ll go oh, that’s what I wanted to write. Sitting down and writing a fiction book, that’s different. That’s way harder. ‘Cause that really is a bit out of my realm. Part of my summer was spent trying to get a book started. Too much shit popped up and I had to do this special and I really wasn’t able to give it enough attention. So over the course of the year, I’ll be able to do that, and I’m writing another play.

NT You got a lot of material during the Bush years. If someone said ‘hey, we’ll take back those eight years for the country if you will give us back that material you got,’ what would you say?

LB Sure. I’d give up all that great material for a smarter country, absolutely.