Ready or Not: Not ready

Directed by Matt Bettinelli-Olpin and Tyler Gillett (the duo behind Devil's Due), this comedy horror witnesses Grace's (Samara Weaving, The Babysitter) wedding night take an evil turn when she's forced to participate in a time-honored tradition of her new husband's (Mark O'Brien, Halt and Catch Fire) rich, eccentric family to play a terrifying and deadly game. (105 min.) 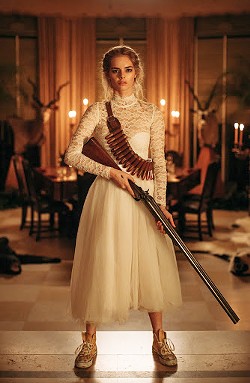 Caleb Ready or not? Umm, definitely not. I won't beat around the bush: I mercilessly loathe this film. The 88 percent score on Rotten Tomatoes is 100 percent flabbergasting. Many of the film's supporters point to its subversive nature, describing it as a social commentary on the class system—rich versus poor, all that jazz. It's there, but the same can be said of numerous horror films in the last few years, brilliant (Us) and not-so-much (The First Purge) alike. But also, so what? Subtext loses its potency when it's spoon-fed, especially when said spoon is in the hands of bombastic characters trying to choo-choo train heavy themes down my throat. Guess I'm just more of an airplane guy. The film opens with a wedding, between bride Grace (Weaving) and groom Alex (O'Brien). The couple spends their first night as husband and wife with Alex's wealthy family at their large, eerily foreboding estate—basically Disney's Haunted Mansion but better well-kept, minus the ghosts and spiderwebs. Alex tries his best, which isn't very good at all, to prepare Grace for a game she's about to play that evening—"It's hide and seek, except, guess what honey, we're gonna hunt you down with guns, knives, and crossbows," (I'm paraphrasing, of course, but you get the idea). It's as if the writers assumed the eccentricity of that concept alone would carry the film, but the procedural that follows just can't live up to such a promising premise. The end result isn't scary or funny, and I don't know which disappoints me more.

Karen I read an article in the LA Times where the screenwriters and some of the actors were interviewed to explain the ending of the film. It's just laughable that they believe the efforts of the film were to seriously explore the themes of wealth disparity and privilege with a wacky delivery. I definitely echo your thoughts. It's not a unique theme at all, and it wasn't done in a groundbreaking way. However, it was weirdly entertaining to hate-watch, you know, call out how terrible some of the lines are, the grandiose acting that feels like overkill, or just the absurdity of the film. I don't loathe it because I can't take it seriously. I feel like they could have found a better cast to execute the satire of the story because, let's be honest, there is a following for a film packed with thriller, gore, and comedy themes. So Grace married into the Le Domas family—they got their fortune from making board games, card games, etc.—and their tradition is that the new family member must play a game the night of the ceremony as a right of passage. The one game you don't want to pick, which naive little Grace of course chooses, is hide-and-seek. Grace hides and the family is seeking to find and kill her to protect their name, fortune, and existence. The family gears up with a freaking crossbow, plus guns, a battle ax, and arrows to hunt her down. The family has your run-of-the-mill losers, and one of them is Emilie (Melanie Scrofano), who snorts cocaine to prepare for the game and you can't help but laugh at the film (not with it) when she accidentally shoots two different maids to death in comical ways.

Caleb I really wish Ready or Not crossed over into that "so bad, it's good" realm for me, but its own self-importance deprived it of even that. I felt like the comedy relied too much on the obvious contrast between the family's elegant old-money mannerisms and their ritualistic blood lust. The family's white-gloved butler, Stevens (John Ralston), for example, is always caught humming classical music (just like ALL refined people do). He's even humming after casually beating Grace unconscious, upon finding her outside the estate's gates (when she briefly escapes the family's clutches at one point). That's funny right? He's so refined, yet sadistic at the same time! It's revolutionary. Oh, not to mention the family's upstanding patriarch and father of the groom, Tony (Henry Czerny), dropping F-bombs left and right. Wow! Aristocrats cuss? But that's so unlike them.

Karen Will Grace make it out of the grasp of the Le Domas family alive? Will she and Alex live happily ever after away from his filthy rich and violent family? If you care enough to make fun of the movie, then just wait for the film to become available on your streaming services to see. I can't say I loved the acting, or that the cinematography was good. I guess they were going for an old-money, dark-atmosphere vibe, but it just didn't match. I know the point is satire, but there's good satire and then there's trying too hard to compensate for a lame-o storyline. Again the only thing that made it somewhat enjoyable for me was making fun of the terrible one-liners like, "You're just another sacrifice." If you do end up seeing this film, don't go in with high expectations. They'll just get blown to shreds. Δ