More than anything, schools are really good at teaching kids how to go to school.

Students learn all sorts of other good stuff along the way, but it’s mostly sitting still and taking notes. For 12 years. Then they’re adults, with full blown legal responsibilities and not much in the way of marketable job skills.

In the next breath, he added: “Our kids will generate incredible ideas.”

To graduate from high school, California students have to pass a standardized exit exam and complete a specified number of English, math, social studies, science, physical education, and either visual/performing arts or foreign language courses. Four years is plenty of time in which to take care of those basic requirements (assuming a student doesn’t have to retake several classes), so most kids end up with holes in their schedules that get filled with electives.

In the past, students could choose either advanced academic classes that paved the way toward college study or shop classes with hands-on training for skilled labor. There wasn’t enough room in the schedule for both. It was one or the other.

Get ready for college.

Or get ready for work.

Current U.S. Census Bureau data shows that young adults with bachelor’s degrees make $10,000 more per year than their peers with just high school diplomas, so it’s not surprising that counselors, teachers, and parents would push kids toward college. Roughly 60 percent of high school graduates move on to higher education. Of those, 57 percent earn diplomas.

But what about everyone else?

“For the past few decades, the thrust was that every student should be college ready with a high school diploma,” Andrus said. “But our primary mission is neither college nor career. It’s to make students prepared for whatever path they take after high school.” 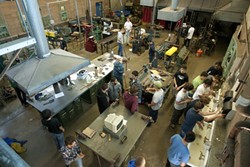 Starting this fall at Morro Bay High School, a new program will combine practical trade skills with an emphasis on design and engineering that allows the course to count as a pre-requisite for California’s universities. The various shop classes will no longer be separate, semester-long courses; they’ll be brought together for a full year of general manufacturing instruction. The next year will focus on design and engineering concepts, and the final “capstone” class will hone a student’s skills in a specific area, such as drafting, wood, or welding.

“Job skills are important even if you’re going on to higher education,” said Andrus. “Students won’t have to take out as many loans if they can get good paying jobs and put themselves through college.”

In a time of rampant budget slashing and state coffers filled with nothing but cobwebs, it seems odd to find a public institution like Morro Bay High School expanding its offerings, but it’s not really offering more classes. It’s just making the classes it has work harder.

Regional Occupation Centers and Programs (ROCP) work with school districts to institute and maintain Career Training Education (CTE) classes. Their goal is to ensure a steady supply of skilled laborers for California’s workforce. Until the passage of Proposition 13 in 1978, a school district’s ROCP was supported by local property taxes.

“The ’70s were the heyday for ROCP,” said Clay Mitchell, an educational programming consultant for the California Department of Education.

Mitchell explained that, after 1978, ROCPs statewide were assigned a “revenue limit” based on the area’s cost of living and population. To determine how much money to give each ROCP, the state multiplies the region’s revenue limit by the average daily attendance of students using the program. The Santa Lucia ROCP serves all of San Luis Obispo County, with a budget of $2.85 million. An estimated 782 local students take CTE classes each year.

In 2009, California went into “flexibility” mode as a means of grappling with the state’s budget deficits. Essentially, that lets the government fudge on many of its funding obligations.

“They froze the ROCP funding at 2007 levels until the flexibility period ends,” Mitchell said. “There are reports already showing that it’s hurting the schools.”

Regardless of the benefits or any increase in demand, ROCP funding will remain flat until flexibility ends. Mitchell wasn’t optimistic that things would change any time soon, but districts have options for overcoming the money problem.

The state allows high schools to partner with community colleges and provide “articulated” courses that count at both institutions. High schools can mirror the curriculum taught at the college level in their own classrooms, or high school students can simply get a hall pass and actually attend a class at a college campus. This way, more people can benefit from the course without its cost going up.

“There’s no need for MBHS and Cuesta to replicate everything,” Andrus said. “When government agencies work together, we can get everything in sync without spending more money.”

Andrus added that with articulated courses and Advanced Placement Exams (also available to high school students and good for college credit), it’s conceivable that students could get a high school diploma and an associate’s degree on the same day. If the practice became popular, it would streamline the education process and reduce the strain on community colleges—and even state universities.

The academic catchphrase gets bandied about quite a bit in these parts, but there’s no reason kids should have to wait until college to test drive the town motto.

“We’re battling a stigma with shop,” Rapoochi said. “People think it’s a class for the dumb guys, but the amount of math and science that goes into auto repair is phenomenal.”

His students will start with manufacturing design, a yearlong class that covers a smattering of everything—wood, metal, green energy, plumbing—and ties it all into science.

“We’ll have the schedule integrated with their science class, so that we’re wiring stuff while they’re learning about electric currents,” Rapoochi said. “They’ll be learning about chemicals in one class and using them to weld in mine.”

In the first year class, Rapoochi plans to have students complete several small projects that familiarize them with such tools as power drills, table saws, and welders. They’ll make their own clipboards on day one and forge their own hammers and chisels before moving on to more complicated jobs like piecing together the parts of a wooden clock.

“That way, they get to experience success right away, and it gets them excited,” Rapoochi said.

By the second year, Rapoochi will stop giving directions and ask his students to design their own projects. He’ll give them a vague objective—build a windmill, for instance—and it will be up to the students to conceptualize their own unique products. The process will challenge them to be creative with their design and methodical with their construction.

Rapoochi will teach students how to program and use the school’s new prototyping machine, which is basically a printer that spits out copies in 3D plastic and cost $35,000. The machine lets students design parts in a computer program, test the idea in plastic, and work out any kinks before making the final product from wood or metal.

The metal shop boasts a similar device, called a Computer Numerical Control machine, that reads a plan and cuts metal into intricate shapes. It’s an industry standard used to make everything from car parts to guitars. Rapoochi’s students will be experts by the time they’re out of high school.

“People need to realize that there are a lot of good jobs out there that don’t require a four-year degree,” Rapoochi said. “Our society is so focused on college. Even me. My daughter’s on the college track.”

Besides his manufacturing program, Rapoochi teaches another set of CTE courses in computer repair and network communications. His students swap out server hardware, clean and organize file registries, and respond to support calls from the school office and other classrooms.

“The work orders are mostly easy stuff like setting up printers or installing programs,” said Ryan Gelston, who plans to major in computer science after high school. “Rapoochi lets us explore what we want in the realm of computer repair. We’ve all built our own from scratch, and it’s easier than Legos, really. It’s just a lot more expensive.”

Gelston showed New Times a robot he’d helped design for a Cuesta competition and built in Rapoochi’s class. It worked like a remote control car with an arm that could grab flags for the contest. It was impressive and looked fun, but Gelston lamented that it wasn’t technically a robot since it wasn’t programmed to work autonomously.

“I’d like to move to expand toward robotics,” Rapoochi said, “but it’s extremely costly to do that kind of program.”

Of course, there’s more to life than robots and power tools. Morro Bay High School offers another CTE pathway that prepares students for work manipulating images and video in the information age.

When Liz Moore started teaching photography at the school, there were six cameras and a dark room for developing traditional film. She scrapped it all and went digital, developing the school’s Arts, Media, and Entertainment program in the process.

“I was told that the state had no money for us, so we partnered with the community and the ROCP,” she said.

She secured a grant from Best Buy to purchase cameras and convinced Charter Communications to donate some video equipment. She rewrote much of the art curriculum to meet ROCP standards and therefore be eligible for its funding opportunities. The media lab now features 20 digital cameras, 35 computers, and a fully equipped green room. Local media and information companies can now expect a steady supply of well-trained graduates for their workforce. Everybody wins.

“There’s an advisory board that looks at what we’re doing and suggests little tweaks to make sure we’re not teaching kids anything they won’t use,” Moore said. “Employers don’t want expertise in any one program, because the technology changes too rapidly. They want creativity.”

Moore was voted County ROCP Teacher of the Year for 2011, which is no surprise considering the scope of her program and the projects her students produce.

They sold photos at Oktoberfest in Baywood. They made a music video and outfitted the DVD with a working menu. They traveled to San Simeon to film an ad campaign for the nonprofit group Friends of the Elephant Seals. They even produced daily newscasts of the school announcements and broadcasted them on the public cable channel.

“I want my students to be able to make a living while having fun and doing what they love,” Moore said.

Rather than a standard art or photography class, Moore’s pathway begins with design. Kids still work with light, paint, and plaster while exercising their creativity, but the emphasis is on multimedia projects, balanced layout, and learning the vocabulary that will help them forge ideas for engaging websites and compelling advertisements.

From there, students can choose from several ROCP courses that teach marketable skills in digital imagery and fulfill both the University of California and the California State University pre-requisites. One class counts for actual college credits at Cuesta.

“This is a lot more fun than English or math,” said Alex Kreile, a student who served as station manager for the video production class. He had to apply for the “job” and do a mock interview with Moore, who wants her classroom to mimic the workplace as much as possible.

“I’m not sure if I want to have a career in the media, but it’s good experience for advertising,” Kreile said. “And I’ll definitely take the class again next semester.”

Sue-Lyn Dorrough had been in Moore’s class since her freshman year. She finished her high school career as the webmaster for mbhs.slcusd.org, a sharp-looking, high-functioning website that puts some newspapers to shame with its photo galleries, sports calendar, and scrolling announcement box.

“These are real-life job skills,” Moore said. “Kids get hired from these classes.”