Reality ahead of schedule

Visual Futurist, a documentary on the work of artist and designer Syd Mead, screens at SLOMA

The present as we know it owes a serious debt to artist, designer, and visionary Syd Mead. The man who gave us the otherworldly yet strikingly plausible environments of Blade Runner, Tron, and Aliens made a career of dreaming up better, brighter futures. Whether these dreams manifested as cars, spaceships, film sets, or simply as works of art in their own right seems almost not to matter to Mead. If he can draw it, time has proven again and again, it can be built. Or it can just be an awesome drawing. 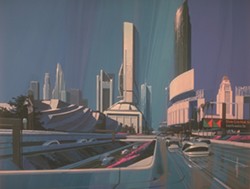 Mead is the subject of director Joaquin Mondalvan’s 2006 documentary Visual Futurist: The Art and Life of Syd Mead, which screens Monday, Sept. 17, at the San Luis Obispo Museum of Art, as part of an ongoing film series connected with museum exhibits. (Visual Futurist is paired with the September exhibit “Remains of the Future,” painter Daniel Dove’s large-scale visions of abstracted man-made environments.)

The extreme realism Mead injects into his work comes from an extensive background in industrial design. A talented illustrator from a young age, Mead was also deeply fascinated by the worlds of engines, steel, and chrome. After graduating from the Art Center in Los Angeles in 1959, Mead went to work for Ford Motor Company’s Advanced Styling Studio, soon leaving that job for other industrial design opportunities at Phillips Electronics and United States Steel. But the present couldn’t contain Mead for long.

Following a move to California in 1975, Mead found his depictions of futuristic cityscapes, slick automobiles, and graceful, alien architecture beginning to attract the attention of major film studios. Mead’s exotic dreams of the future were realized in Star Trek: The Motion Picture, followed by in 1982 by Ridley Scott’s Blade Runner. Mead was originally commissioned to conceptualize the film’s flying car, the Spinner, but was quickly called upon to realize Phillip K. Dick’s futuristic interiors and gritty cityscapes.

Sitting at his desk in his Pasadena studio, looking up from a half-finished drawing, Mead describes the inner workings of the Spinner as if the vehicle were every bit as real as those he designed when working at Ford: “The reason that the wheels stuck out in the front and there’s space between is because it is a helicopter, it’s an aerial vehicle. You have to land this thing, and you want to see where you’re going, so you want to look down past your feet.” He gazes into the camera seriously. “Otherwise you’re landing blind.”

Mead’s description of wheels as “feet” is fitting for a designer always seeking to streamline the experience of living, making the future a kind of seamless, intuitive place where everything just makes more sense.

“If you care about the future, it shows that you believe in what you’re doing now,” he explains at the beginning of the film. “And you think it’s worthwhile enough to have some lasting impact.”

Despite such optimism, Mead remains cautious in his hypothetical musings on future technology, reflecting on the questions Dick posed in Do Androids Dream of Electric Sheep?, the prescient novel on which Blade Runner is based: “What are these creations? Are they a toaster? Can we just throw them away arbitrarily? How smart do they have to be before they’re too smart? … If you know enough to know you’re doing wrong, will you? If you give someone a choice, will they always do the right thing? Giving intelligence to something is dangerous, because you become custodian of rationality, and that can be twisted in wonderful and horrible ways.”

Interviews with Blade Runner producer Michael Deeley and the film’s vehicle builder Gene Winfield show the many sides of Mead: a vibrant, artistic mind boosted by a rigorous work ethic and a wealth of practical engineering knowledge.

Mead’s work on Blade Runner was followed by work on Disney’s 1982 cult classic Tron. Ironically, the story of a hacker abducted into the digital universe of his computer came before the animation used to tell the story had gone digital. Tron essentially used analog techniques to tell a fable about the future. This was nothing new for Mead, who referred to science fiction as “reality ahead of schedule.”

Interviews with Tron screenwriter/director Steven Lisberger and special effects supervisor Richard Taylor reveal the detailed level of imagineering that allowed the film to transcend its limitations.

As a film, Visual Futurist is riveting on some levels, yet lacking in others. The subject of director Montalvan’s documentary is dynamic and fascinating, and so are the glimpses of Mead’s stunning artwork, which include the early drawings for films that later became science fiction classics.

But Visual Futurist would certainly have been strengthened by the use of footage from those films—juxtaposing, for example, Mead’s conceptual drawings of flying cars with footage of Harrison Ford actually lifting off in one; his sketches of Tron’s uncanny computer world with the glossy finished creation.

The film is certainly nowhere near as stylish as its subject, either. A lot of no-frills, straight-ahead shots of talking heads (albeit some pretty cool talking heads) and precious little spontaneous action give it an unfortunate static quality.

That is, until Mead takes the filmmaker on a joyride in what looks and sounds for all the world like a vintage spaceship straight from the designer’s imagination, gleefully explaining its inner workings in terms that will baffle most viewers.

“Because of the radiator size and the way the engine runs, the ideal situation for driving the car is to have the outside ambient air temperature the same in Fahrenheit degrees as the miles per hour,” Mead tells us authoritatively, whizzing down a palm tree-lined road. “So if it’s an 85 degree day, you’re supposed to be going a steady 85 miles per hour.”

Hands firmly planted on the steering wheel, he steps on the gas, accelerating fearlessly toward a hazy blue horizon.

Arts Editor Anna Weltner used her jetpack to fly to work. Contact her at aweltner@newtimesslo.com.