Reamed with the self: Photographer David King Rowe captures native scenes with a foreign sensibility 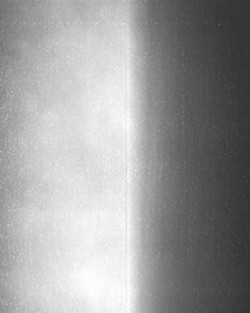 Rowe, whose analog visions of the Central Coast hang at The Sal Paradise through Jan. 1, offers a look at local vistas that reveals a hint of the uncanny. Big Sur, Morro Bay, and the stretch of highway that connects them are common sites of photographic interest, yet here their familiarity only heightens their strangeness. Largely shot with black and white film, the series captures native scenes with a kind of foreign sensibility, turning them into meditations on light, space, shadow, and texture.

A photograph called Divine Intervention, for instance, takes the meeting of ocean and sky and aligns it vertically, rather than horizontally. The elements of a typical coastal scene are all present, yet the simple shift seems to ask the viewer to see the typical with new eyes; to register surface and color before subject matter.

Rowe, in a recent interview, said he hoped to further explore this effect in a series he referred to as “The Downfall of the Archetype.”

“It takes very simple subject matter, and the perspective, when it’s altered, creates a very almost black hole-esque feel,” he said. “You look at it, and it’s so simple that you start associating it with things. You take a symbol like water, and … You just ream it with the self, whatever you as an individual interpret it as; not a sociological interpretation, like a symbol, or an archetype.”

Pretty heady stuff, especially considering that the show at Sal’s is Rowe’s first “real” exhibition of his work, and this is his first time giving an interview about his artistic practice. With the exception of one photography class, which he dropped out of after two weeks, Rowe is entirely self-taught. He’s learned from observing the work of the masters (he cites 19th century American modernists like Alfred Stieglitz, Paul Strand, and Edward Weston as influences), and from finding tips on the Internet, he said, but mostly from trial and error.

Rowe attended Cal Poly for one year as an environmental management major, but quickly became “burnt out,” he said, with both his field of study and with school in general, preferring to spend his time documenting the natural world. He switched from digital to film photography a few years ago, he went on, explaining that the analog approach afforded a deeper connection with the image.

“What’s important for me is the hands-on; it really allows you to slow down, you know, twisting knobs, it really forces you to think about how you want to present this object,” he said. He gestured toward a photo of a lone tree on a hill. “Like this tree—how do you want to present it? What are you feeling at the moment?”

With the exception of the occasional foray into portraiture and event photography, for which he switches back to digital, Rowe now shoots with a 35mm film camera, occasionally bringing along a large-format and a medium-format camera on his photographic adventures.

Interestingly, when not creating desolate, moody visions of the natural world, Rowe also pursues an interest in high-fashion photography, staging glamorous, vibrant shoots of photogenic friends. He seems to alternate between the two genres as a kind of cleansing ritual. Rarely do the two overlap.

A work called Synapse is the only piece in the Sal’s show that wasn’t taken locally. Thanks to the contrast of the scene, the light, and perhaps luck, the shot is magnificent: A simple yet sublime black and white shot of a swamp cypress tree is white-on-black below the horizon line; black-on-white above. The wintry starkness of the photograph belies its steamy setting in Florida’s Everglades. Once again, mood seems to precede environment. Documentation becomes expression.

Rowe’s exhibit comes with a kind of manifesto. “Transcending a world of digital haze, immediacy, and robotic grandeur,” read the invitation cards. I ask, what is robotic grandeur?

“Shooting the coast is just the biggest breather for me,” he continued. “It allows me to step back, isolate myself in a bubble from the world.”