When last I checked, Courage to Grow, Santa Barbara-based reggae act Rebelution’s CD, had slid from fifth to sixth on Billboard’s Top Reggae Albums chart. Still, they were ahead of a Bob Marley CD! Not too shabby, eh?

Next Thursday, Sept. 4, Rebelution will make its triumphant return to The Graduate for an 18-and-older 9 p.m. show (Doors

open at 8; tickets cost $15 advance at Vallitix or $18 the day of the show; Iration will open the concert). If you want to go, may I suggest advance tickets? They sold out the last time they were here.

The four band members—keyboardist Rory Carey, vocalist Eric Rachmany, bassist Marley D. Williams, and drummer Wesley Finley—come from a wide array of musical backgrounds, but they set out to create a fresh and vibrant sound they call “California Reggae.”

Their current success is a grassroots Cinderella story driven by the Internet and tenacity. After they released Courage to Grow in June of ’07, they first saw it become one of the most downloaded reggae albums on iTunes. By the end of the year, it scored the iTunes Editors Choice: Best Reggae Album 2007. About 19 weeks ago—a year after its initial release—it finally hit Billboard’s Top Reggae Album chart, climbing as high as fifth.

The group’s sound, while firmly footed in reggae tradition, could hardly be described as roots. Instead they blend elements of hip-hop and rock—a combination that’s made them a favorite of Santa Barbara’s State Street scene.

Check these rising stars out! 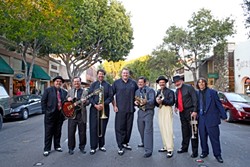 Those swingin’ hep cats with the big boppin’ beat, Sugar Daddy Swing Kings, will help you kick off your Labor Day Weekend in Paso Robles on Friday, Aug. 29 with a free, 5:30 to 7:30 p.m. show at downtown Paso Robles City Park. Expect to jump and jive as they lead the crowd through horn-infused classics by Cab Calloway, Louis Prima, and Louis Jordan, as well as originals and their own takes on contemporary pop songs.

Acoustic soul duo Brick Fields, featuring husband and wife Rachel and Larry Brick, are passing through our area from Arkansas. “Music is our gift and our life,” they said on their Myspace page. “We’re on a faith walk. There are no guarantees, but we both know that this is what we were born to do.” They call their folksy, bluesy, jazzy sound “Good Medicine,” and you can hear it at The Wine Attic on Friday, Aug. 29 at 7 p.m., and Monteleone’s Rock on Wednesday, Sept. 3 and Wednesday, Sept. 10, at 8:30 p.m. 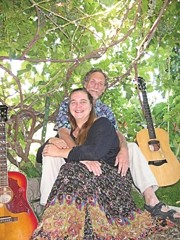 Get a dose of raw, raucous, estrogen-driven rock this Saturday, Aug. 30, when the Dirty Pink Slips dig their spurs into the sides of Frog and Peach and whip its crowd into a frenzy with a riding crop. Whitchaw! Honor Bound Heroes (when are you going to send me your new album, bitches?) will open the show.

Jazzy dance band the Zongo All-Stars play an afternoon concert this Sunday, Aug. 31 at the Sea Pines Golf Resort in Los Osos from 2 to 5 p.m. Food, beer, and kids younger than 12 get in free to this all ages show. Prepare to shake your moneymaker.

DEN, a blossoming L.A.-based indie rock group, has taken to the road for their inaugural tour to support their EP new release, Caddywhompus. On Wednesday, Sept. 3, they’ll play a free 5 p.m. in-store concert at Boo Boo Records, followed by a 10 p.m. show at Frog and Peach. The group draws from an array of classic rock and jazz influences, dabbling in fluctuating time signatures and vocal harmonies—fancy business! They’ve drawn comparisons to Stephen Malkmus, Pavement, and early Phil Collins.

For a producer, Koushik must have one of the most serene views in the country. On his second release for Stones Throw Records, he balances oft-kiltering, cavernous beats with light-as-air harmonies, and with the album opener “Morning Comes,” he’ll coax the sun out of hiding and make your waking yawn a delightful experience. It’s all about mood, with conventional song structure taking a back seat to textual ambience and soundscape. Part eclectic beat tape in the tradition of Madlib and J Dilla, Koushik adds large measures of pop melodies that swirl around his mist-thin falsetto and dramatically build to a glorious apex. And before you know it, the track ends as gently as it began, each track taking up enough time to create an impression, then moving on. This is a masterful opus of organic chillout jazz with the production clarity and inventiveness of legendary producer David Axelrod’s best work.

Experimental popsters with panache toward the hurly burly musical production of show tunes and Broadway, the Parenthetical Girls offer up the majestic pomp of classic pop twisted to a modern aesthetics. Here, instruments are returned to their emotional capabilities. Just listen to the track “Unmentionables.” From the heavenly lushness of a violin’s vibrato to the street-carnival bounce of tuba and trombone’s fat sliding voice or the dream-like wonderment caused by the glockenspiel’s endless twinkling, all this noise is laced up within this one song to dramatic and invigorating effect. This is the baroque-pop of Andrew Bird, and though it tends to lean more toward Cabaret zaniness than MGM sophistication, its grandeur can never be questioned. And when the songwriting carries the poetic literary heft of “The Former” as it twists with sexual tension accented by angelic choral harmonies and a rising unison of strings, it’s as cinematic as any stage production.

Glen Starkey is ready to lead you astray. Put your life on the line at gstarkey@newtimesslo.com.