Toad is ready to rise again

I think it was 1991 when I first interviewed Toad the Wet Sprocket. The homegrown Santa Barbara band had self-released two albums, Bread & Circus and Pale, when a major label bidding war ensued and the quartet landed a deal with Columbia that allowed them release their first two albums unaltered, as well as record their breakthrough album Fear. 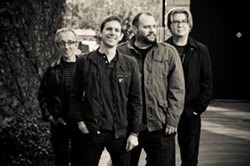 Thanks to “All I Want” and “Walk on the Ocean,” the band’s popularity was blowing up, so my then-editor Todd Kleffman and I drove down and met the band in bassist Dean Dinning’s parents’ basement. If I remember right, Dean, lead singer Glen Phillips, drummer Randy Guss, and guitarist Todd Nichols all still lived with their parents. Just kids, really.

The band’s been through a lot since then: more albums, a break-up, short-lived reunions, and side projects. Now they’re on the verge of releasing their first new studio album since 1997’s Coil.

New Times spent a freewheeling 30 minutes speaking to Glen Phillips—a 43-year-old who was just 16 when Toad formed in 1986—about the band’s reformation, its new album, and how the music business has changed in the past 25 years.

The new album is yet unnamed and there’s no release date set, but according to Phillips, the band has 15 songs in the can and will release 10 or 11 on the new album. Unlike their major label days, they’re doing it themselves, releasing it on Abe’s Records, the label they formed to release their first two records before they got signed by Columbia. So, how will they release it?

“I guess that depends on what you mean by ‘release,’ because these days, things being what they are, we’re kind of doing it in phases,” Phillips said. “We’ll put it out ourselves, do a Kickstarter campaign to fund it, and do some really cool packages, vinyl packages for the diehard fans. It’s hard to just do a general release right now. We could probably walk in and get a record deal, but it’s not worth it. You pretty much have to give up a kidney to get a [major label] deal right now.”

Toad the Wet Sprocket certainly knows something about whether a major label deal is worth it. Columbia still owns the rights to their back catalog, so the band has done what many bands before them have resorted to: They’ve re-recorded some of their essential early material. Does Phillips regret the Columbia deal?

“Not at all. That’s how major label stuff works,” he said. “Their accounting department’s job is to not pay. It wasn’t a matter of us being hosed. We had a fair deal, but it was also a standard deal. Today when television producers are trying to get a song placed on a TV show, they go to a label and the label gives them this big expensive quote, and it goes back and forth, and maybe the song doesn’t get placed because the label wants too much or it takes too long. When we own the song, they come straight to us. We [re-recorded] 12 songs. That means if someone wants to use one, they license it from us more cheaply and for a lot less trouble. It’s just a business decision. Look around and you’ll find everyone on Earth has done re-records. That’s how the business works. I don’t fault Columbia. They invested a lot of resources in us, but they also worked us ragged: three interviews a day, at least one radio station, meet fans after shows. These days, most labels don’t even have representatives to work with the bands. But look, we were incredibly lucky to be allowed to put out indie albums, to tour—that couldn’t happen anymore. I mean, we were sleeping four to a room, going out in a van, and even then losing money. It wasn’t glamorous, but it’s how we built our fan base.”

Which brings up another point. Who is this new record for? Is it just nostalgia, something for the old fans, or is there a whole new audience out there waiting to discover Toad?

“I hope there’s more,” Phillips said. “I don’t know. Nobody likes to think they’ve stopped growing as an artist. We have a certain sound, a guitar style, background vocals, a certain thing that people recognize as Toad. It’s automatic when we get together. So people who know us I think will be reminded, but I hope as well that it’s a step forward. I mean, we’re not Radiohead. We’re not going to redefine how music is written. I believe in what the songs are about and what they communicate. We’ve never been about crazy innovation—we’re a band that tries to emotionally connect.”

Despite pervasive piracy and the huge changes in how music is distributed, Phillips remains optimistic about making—and enjoying—music.

“It’s an incredible time for music! I mean, when I was growing up, you chose your genre, you bought maybe five records because that’s what you could afford, and if you had a favorite band, you were loyal,” he said. “Now people skim around and if a song grabs you, ta-da! That’s your new fave. As for piracy, I’m torn. Commercially recorded music is almost a brand new thing.”

It’s true when you think about it. People have been making music and packaging it on a little disc or tape for fewer than 100 years. Before that, if you wanted to hear music, it had to be performed live. Phillips seems to understand that technology is moving faster than the music industry’s ability to
control it.

“The average consumers don’t really get it,” he said. “They think music should be free and that rock stars are rich. They don’t take the time to work out the impossibility of that equation. But people who care about music are supportive. Of course, some are jaded. They feel like they got burned in the ’90s by bands that can’t play live.”

The bottom line is the music biz has changed. It used to be that albums were important and singles were icing on the cake. Now singles are everything and albums are secondary. It’s almost as if we’ve reverted back to the early days of rock’n’roll where the single was everything, but there are still some of us who love the album, the theme, the artwork, that tangible thing … not a series of 1s and 0s stored in the “cloud.”

“That’s one advantage,” Phillips agreed. “Most people in our generation do want this artifact to hold in their hands. The album means something to them.”

That’s why Toad has made and plans to continue making packaging and album art a big part of what they do and sell.

“With any kind of endeavor that anyone does, especially art, it’s not just a commodity—it’s not making shoelaces,” Phillips said.

Let’s backtrack a second and talk about the hits. In addition to “All I Want” and “Walk on the Ocean” from Fear, “One Little Girl” from Bread & Circus and “Come Back Down” from Pale both hit the charts, and 1994’s Dulcinea generated “Fall Down” and “Something’s Always Wrong.” Does the band know when it’s got a hit song on its hands?

“I don’t pretend to know about the radio or what makes a hit song,” Phillips admitted. “My personal tastes really don’t connect with what I hear on the radio. I do like The Lumineers and Mumford & Sons, but these days you might hear Death Cab for Cutie or Arcade Fire—the kind of stuff you’d never hear on the radio a few years ago. Things have changed, but look, even the record companies don’t always know. They kept saying, ‘You need another song like “All I Want,” something with a big bridge,’ and they almost decided to leave ‘Walk on the Ocean’ [the other big hit from Fear] off the record. I mean, all these geniuses at the label didn’t even know.”

So what made this the right time for Toad to reform and start recording and touring in earnest? Or more importantly, how, after 27 years of up and downs, did they manage to overcome their differences?

“We did break up and there have been falling outs, but when things were hard, we didn’t smear each other in public,” Phillips said. “We always felt we’d rather split up than tear each other apart. We had our hard years, and we tried to get back together before and things went bad again, so we waited a few years, tested the waters again, grew up, and finally we became more interested in getting along than rehashing old wounds. We still have moments, have reactions, but we waited until we could enjoy each other again and make a record we could be proud of, and we are really proud of these songs. We didn’t want to do this unless it was going to be something special. We don’t want to be that band that’s holding on for no reason.”

One final question for Glen Phillips: Do you still like playing live?

“I would like teleportation! It’s about 50-50 between playing solo gigs and Toad stuff, but I love the band, love that we get treated nicely. When I tour solo, I’m doing everything myself, but with Toad, we’re in a van and we have three crew. It’s not glamour level; we run a pretty tight ship, but yeah, being on stage, yeah, still good.”

You don’t know him, but you should!

Emmy Award-winning TV writer turned singer-songwriter Tracy Newman plays Linnaea’s Café on Wednesday, April 10 (7 to 9 p.m.), and if you know what’s good for you, you’ll be there or at Last Stage West on Thursday, April 11 (6 to 8 p.m.), because she’s a charmer! Her new album, I Just See You, is filled with literate, sweet folk and western-flavored songs that’ll have you tapping your toes and singing along.

She made all the money she needed writing for The Nanny, Hiller and Diller, and The Drew Carey Show, and won a double Emmy and Peabody Award for writing the coming-out episode of Ellen. Then she said “Sayonara, Hollywood!” and reinvented herself. For local music lovers, the best touchstone I can set up for you is this: She’s the female equivalent of Craig Nuttycombe. Great songs, warm performer!

Also check out Diunna Greenleaf and Blue Mercy on Saturday, April 6, at 8 p.m. at the SLO Vets Hall. The Lenny Blue Band opens the show. Tickets cost $17 for SLO Blues Society members and $20 for the general public.