Santa Barbara County law enforcement officials were investigating the theft of $17,000 worth of agricultural chemicals from a farm outside Santa Maria in 2017 when they uncovered a local black market for stolen farming equipment.

Investigators with the Santa Barbara County Sheriff's Office found that the chemicals—pesticides and fertilizer—were being stored at a facility where they also later recovered several hundred dollars' worth of stolen construction equipment. 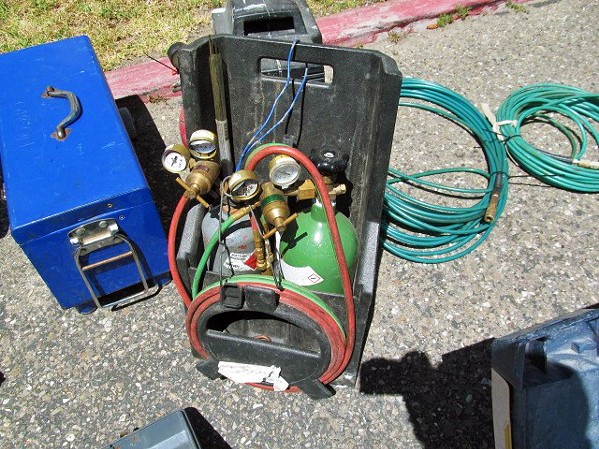 They were able to link that equipment back to a suspect who led investigators to several others, including two who were identified by law enforcement after a $7,000 ATV was reported stolen from a farm on West Betteravia Road and then spotted by its owner in the yard of a Santa Maria home. A stolen $1,400 injection pump was found with it.

Another suspect was arrested that summer after allegedly snatching a $25,000 equipment trailer and $1,400 worth of other materials from a farm near Bonita School Road months earlier.

The investigations into those crimes eventually revealed more than one location in Santa Maria where stolen agricultural equipment and materials are re-sold illegally through a black market.

The discovery and the incidents that led to it weren't all that surprising to law enforcement officials, since farms, ranches, and vineyards—with their vast and often sparsely occupied acreage—are frequent targets of theft on the Central Coast and in California in general. In an effort to better prevent agricultural thefts, the way those crimes are tracked and prosecuted is changing.

Gov. Gavin Newsom signed Senate Bill 224 into law on July 12. When it goes into effect in January 2020, it will create a new penal code specifically for grand thefts of agricultural property and equipment.

Sgt. Jeff Nichols, supervisor of the Rural Crimes Unit for the San Luis Obispo County Sheriff's Office, said the new categorization will likely help law enforcement and public officials keep better data on where and when the most serious thefts of agricultural property are happening.

"And it seems to me it's a mechanism for them to be able to identify those crimes and fines associated with those crimes," Nichols said, "so [the profits] can go back to the ag community instead of being absorbed by the state."

Along with creating a new penal code, SB 224 will also ensure that any fines paid by those convicted of grand ag theft will be funneled back into the state's rural crime prevention programs. The Central Coast and Central Valley both have rural crime prevention programs that bring together law enforcement agencies, district attorneys, and agricultural commissioners from several California counties to deter rural and agricultural-related crimes.

Both SLO and Santa Barbara counties participate in the Central Coast Rural Crime Prevention Program, and although Nichols said agriculture-related crimes aren't as common on the coast as they are in the Central Valley, it is an issue here.

These thefts can be financially devastating to local farmers and ranchers, according to Brent Burchett, executive director of the SLO County Farm Bureau.

"For a lot of farmers, they can't just go out and buy new equipment in time to get their crop planted or harvested," Burchett wrote in an email to New Times. "The frontline of defense for farmers is the San Luis Obispo County Sheriff's Office Rural Crimes Unit, and we know that the more we can support their work, the more crimes we can abate in rural areas of SLO County."

SB 224 takes the proceeds from fines imposed on people convicted of stealing farm equipment and earmarks those funds specifically for the prevention of such rural crimes. So while Burchett said agricultural-related crime will always be a problem for Farm Bureau members, having an additional revenue stream will help support the work being done to prevent it.

Although no one is sure yet how exactly the fines collected through the new law will be allotted or used, Santa Barbara County Deputy District Attorney John DeChaine said the creation of a penal code specific to agricultural grand thefts will help law enforcement better track where crimes are occurring and how to best use resources in combating those crimes.

DeChaine, who often helps prosecute rural crimes, said it's important to know where thefts are occurring so law enforcement agencies can divert funding, staff, and prevention efforts to those places.

"If the charges are simply grand theft," he said, "there's little ability to track whether they're in more rural areas or more cosmopolitan areas." Δ