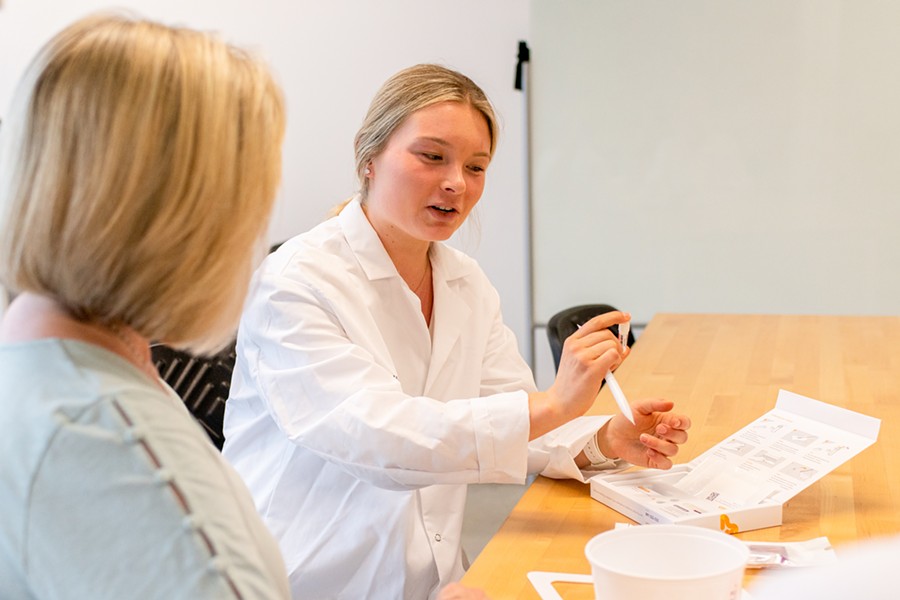 PHOTO COURTESY OF KARI PILOLLA HANDS-ON Cal Poly student Karli McCarthy works with a participant of the ReCHARGE with Strawberries clinical study, which is taking a close look at whether and how strawberries positively impact health in postmenopausal women.

ReCHARGE with Strawberries researchers are still looking for several postmenopausal women willing to participate in this study. If you'd like to get involved, contact Kari Pilolla at kpilolla@calpoly.edu or the program at recharge@calpoly.edu. You can also call (805) 756-1175 or visit secureforms.calpoly.edu/recharge for more information.

Women are often left out of clinical trials and studies in fields from medicine to city planning. The result is a world with buildings, cars, and medical procedures built with men in mind, making it generally less convienent for women to function in daily life.

One big reason for this, according to Kari Pilolla, an assistant professor in Cal Poly's Food Science and Nutrition Department, is that women's menstrual cycles add a somewhat unpredictable hormonal variable to consider when conducting a study, widening the margin of error and making reliable data more difficult to gather.

"It's so much easier to work with men," Pilolla told New Times. "So that's why I'm particularly interested in women. There's not enough research into women."

Little by little, Pilolla is working to change that. In partnership with faculty and staff at Humboldt State University, Pilolla is helping to lead a study into the effects of regular strawberry consumption on the health of postmenopausal women, primarily in the heart and gut.

During the ReCHARGE with Strawberries clinical trial, participants are given a powdered strawberry supplement to mix into a drink each day for six weeks, and then they're given a different supplement for the next six weeks. One powder contains real strawberry compounds, Pilolla said, while the other is a placebo.

Researchers, including both staff and roughly 20 Cal Poly students so far, track participants for nearly 5 months, and are involved in planning, budgeting, marketing, methods, testing—basically every piece of what it takes to run a research project, Pilolla said.

"These women who participate are impacting so many students," she said.

Once they've made it through the program, participants are given a comprehensive analysis of the study's impacts on their health, which Pilolla said could be incredibly helpful to their own journey post-menopause.

As women transition into and through menopause, their hormones change dramatically, and Pilolla said that can often lead to increased blood pressure and cholesterol. Menopause tends to be a confusing and turbulent time even without the heightened risk of serious health ailments­—an experience that's marred by lacking information, hot flashes, and sometimes severe mood swings.

Strawberries contain compounds that Pilolla and her students think could lower cholesterol levels and improve gut health, both of which they think could work together to improve heart and liver health. Strawberries also just so happen to be one of the most commonly eaten berries in the U.S. and one of the most important crops on the Central Coast and in California.

Pilolla said that if she and her students can make even one small part of the transition through menopause easier, possibly through a fruit that most people love to eat, she'd be happy.

"We want to give them a better quality of life," she said.

Research into the gut and its connections and impacts on the rest of the body is exploding right now, and nutrition in general is a field that's constantly changing. That's partially why Cal Poly senior Karli McCarthy has always been drawn to applied nutrition, her major, and that's why she wanted to get involved in this study. She likes the hands-on nature of clinical research and how scientific studies broaden the world's understanding of everything.

As an undergraduate student, McCarthy has played a key role in conducting the ReCHARGE with Strawberries study, and she plans to continue her work with the program as a grad student next year. She's learned a lot through this work, she said, and she hopes to use the study as her thesis project.

• A local youth baseball club, the SLO Rangers, is working to raise money for a trip to Cooperstown Dreams Park in New York for one of the nation's largest baseball tournaments. The Rangers teammates have been playing ball together since they were 7-year-olds, and in October 2019, the team was awarded its official bid to attend the Cooperstown tournament. To help the Rangers meet their $15,000 fundraising goal, visit the team's GoFundMe page. Δ