Four artists present a show of photographic nudes in Atascadero

The human body is such an integral part of the art world that I sometimes forget about its perennial power to incite moral outrage. And yet talking to model Katja Gee, I’m reminded once again.

“People ask, ‘So what do you do for a living?;” says Gee, who holds a degree in English from Cal Poly. “And I say, I’m an art nude model. And there’s such moral judgment there: ‘You take your clothes off for money?’” She laughs. “Yes, but that’s not the point.”

Gee’s porcelain skin and lustrous honey curls can be seen in abundance in the glorious new exhibit Reciprocity, a series of photographic nudes by a collaborative group of local photographers. (I know, right? Nudes in Atascadero? Collaborative photographers? What’s happening to America?) Artists Alison Watt Jackson, her husband Dennis Jackson, Michael V. Messina, and Kabe Russell are the self-proclaimed Pre-Raphaelite Society. They’re named for the historic Pre-Raphaelite Brotherhood, a group of artists, poets, and critics whose work drew inspiration from the natural world. The Brotherhood made a point of distinguishing their work from the Classical poses and compositions espoused by many artists who succeeded Raphael and Michelangelo, and in the spirit of this 19th century group of artistic hell-raisers, the foursome concentrates primarily on photographing figure studies in nature, striving to capture the beauty and purity of the human form in its most organic state. Models Gee, Mallory Ann, Yume Dream, Agnosia, and Olivia are treated less as subjects and more as peers, equally involved in the creative process.

The results are strikingly diverse, showcasing a single moment viewed through multiple lenses. Russell’s compositions, which are often completed in Photoshop, are by far the most fantastical: a ghostly caress in The Last Kiss; a portal to the heavens in A Place to Dream; an impossible vortex in the underwater shot Story Time.

Messina’s work shows a more painterly approach in pieces like Bathed in Light, in which two nymph-like figures, awash in a golden glow, embrace one another in a forest clearing. The work feels pure, even spiritual, as if the women were communing with divine. Of course, not everyone sees it that way.

“It’s fun to watch people come in,” Messina laughs. “One guy, kind of my age, was there looking at them, and his wife suddenly realized what they were, grabbed him by his collar, and jerked him out that door as fast she could.” 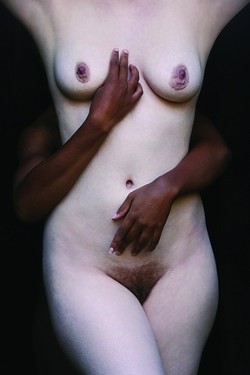 “Humans are the only animals that are not comfortable in their own skin,” adds Watt Jackson, paraphrasing her favorite photographer, German-born Ruth Bernhard. “When you look at a picture and you’re not comfortable with it, that’s about you.”

But the public’s reaction is a mere afterthought compared with the other challenges inherent to shooting nude photography in the great outdoors.

“I always come back from a shoot exhausted and scraped up and bruised,” Gee says, cheerfully.

The group’s muse is no stranger to climbing rocks and trees in the nude. Now that the Pre-Raphaelite Society has moved on to underwater scenes (making for some of their most magical images to date), Gee has also suffered multiple cases of hypothermia. Not that she’s complaining.

“When you’re in the nude, you don’t have any of your tools. You get this incredible respect for how cruel nature actually can be, and it makes that interaction more truthful. You learn that, you know, it’s cold outside. Rocks are hard. You’re going to get wet. And you’re going to have the best time of your life.”