Tom Murphy, the creator of the Reclamator sewage elimination system that he touts as a solution to Los Osos' sewer woes, has filed an almost-$80 million complaint with the California Victim Compensation and Government Claims Board. Plus, a $100 million complaint against the Los Osos Community Services District could be on the way. 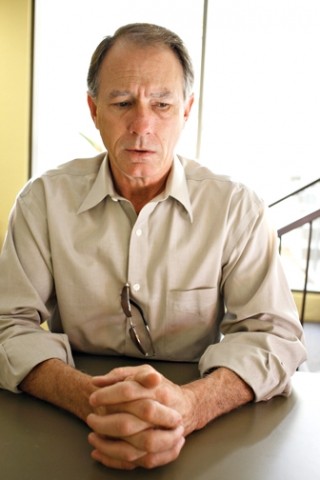 # The initial claim, filed on Dec. 11, alleges that members of the State Regional Water Quality Board slandered Murphy, and in doing so, ruined his business opportunities in Los Osos.

Murphy has built a reputation throughout the county as an unrelenting pusher of his ideas. Some have gone so far as to accuse him of selling what amounts to magic beans, but the resistance he's met with in the public arena has done nothing to weaken his resolve.

In regard to his latest plot to overthrow the wastewater industrial complex, he said: "If they want to defame me, they can pay me."

The claim is essentially a precursor to a civil lawsuit against the state, according to claims board public information officer Miles Bristow "Most claims with complicated legal issues, like this one, the board rejects," he said. "The next step is to take it to court by filing a civil lawsuit, and let the courts decide."

In the claim, Murphy cites instances in which the employees of the water board--enforcement coordinator Harvey Packard and executive officer Roger Briggs--made what he feels are disparaging statements about him during KVEC radio broadcasts.

As for the dollar amount, $79.5 million is roughly the figure that Murphy estimates he would have made while operating the Reclamator at 5,000 Los Osos homes over the course of 20 years.

For his part, Packard said that he hadn't seen the complaint, couldn't confirm that it exists, and couldn't comment until he's read it.

But it does exist, and so do plans for a $100 million class action suit, according to Murphy.

After three decades of sewer drama, the success of November's Proposition 218 vote--which approved a tax assessment to fund the construction of a Los Osos sewer--may, to some, have seemed too easy of a solution. Indeed, Murphy wants to make sure that it doesn't happen.

Soon, Murphy said, he will start gathering signatures from people who are connected to either of the CSD's group septic systems--the ones who've been ordered by the state to cease and desist discharging waste into the ground. There are 224 such houses. The petition will demand that the CSD do business with Murphy. If the CSD rejects it, Murphy said, the same residents who elect and fund the CSD would file a class action suit in the amount of $100 million.

"This is the situation that the LOCSD will be in," Murphy said, "if they do not finally bite the bullet and do business with us."

Members of the CSD were unavailable for comment as of press time, but Deputy County Counsel Warren Jensen said Murphy "could certainly file a lawsuit, but whether or not it would be dismissed is another thing."