Francis Lawrence (Constantine, I Am Legend, Water for Elephants, The Hunger Games: Catching Fire) directs Justin Haythe's (The Clearing, Revolutionary Road, The Lone Ranger, The Cure for Wellness) script based on ex-spook Jason Matthews' book about ballerina Dominika Egorova (Jennifer Lawrence), who's recruited into the Russian "Sparrow School," which trains spies. The target of her first mission, CIA Agent Nate Nash (Joel Edgerton), turns out to be more complicated than she could have imagined. (139 min.)

Glen Taking on a female James Bond-esque role seems to be a rite of passage for Hollywood leading ladies. Think Charlize Theron in Atomic Blonde (2017) or Angelina Jolie in Salt (2010), where they got to look sexy and kick ass. I guess it was Lawrence's turn. Dominika is a prima ballerina with the famed Bolshoi ballet company, but an "accident" ends her career, imperiling her lifestyle: a comfortable apartment provided by the Bolshoi and medical treatments for her ailing mother, Nina (Joely Richardson). Manipulated by her uncle Vanya (Matthias Schoenaerts), a Russian "security" official, to seduce a Russian oligarch in exchange for keeping her apartment and health care for her mother, Dominika is quickly swept up into Vanya's corrupt world and given a choice: become a sparrow or die. It turns out Dominika is a natural at this spy stuff, referring to sparrow training as "slut school" and learning to manipulate those around her. Watching a film about a person's corruption turns out to be a lot less fun than you'd think. Russia is depressing as hell, the collectivist state is power-mad and soulless, and whatever redeeming qualities Dominika started with disappear, leaving viewers with a protagonist who's hard to care about.

Anna I wasn't particularly looking forward to this film; the trailer left me feeling less than hopeful as far as storyline goes and annoyed by Lawrence's Russian accent. While her accent proved to be fine in the film, my guess that I'd be disappointed by this spy thriller was spot on. It seems that the utmost skill a sparrow must have is beauty, and their assignments are to manipulate victims whenever needed. It isn't my favorite concept, and I thought the execution was pretty boring. While Lawrence is eye candy on the screen, the rather wooden and underdeveloped Dominika character is neither captivating nor particularly relatable. The film just never seemed to launch for me, and at almost two hours and 20 minutes, it was a long slog that I was glad to be done with. I do enjoy a good spy thriller as well as a strong female lead, but Red Sparrow failed to hit the mark with me, and judging by its reviews so far, I'm not the only one.

Glen Lawrence just feels flat in this performance. Who is Dominika? What motivates her? Is it simply survival? I don't know, and I'm not sure Lawrence figured it out either. If her only motivation is helping her mother, is it worth selling your soul to the Russian state? The whole film is shrouded in a somber, depressing veneer. It's joyless. James Bond films are fun because they know they're a ridiculous fantasy, but Red Sparrow doesn't know how to lighten up or even slyly wink at itself. At least Atomic Blonde had the good sense to dive headfirst into the neon and synthesizer glitz of its '80s milieu. Red Sparrow tastes like prison gruel, not entertainment. We're supposed to be rooting for Dominika to find a way out of her mess and take her life back, but instead she digs more deeply into her corrupt world. Soon it feels like her life isn't worth saving—who would want to live a life of lies, torture, and mistrust? There's also a decided lack of chemistry between Lawrence and her costar Edgerton. I know Lawrence has become a huge star with two big franchises (X-Men and The Hunger Games) under her belt, and I applaud her taking on roles in smaller (Joy) or experimental (Mother!) films, but she seems to shine brightest in roles where she's a vulnerable but independent woman (Winter's Bone and Silver Linings Playbook) who rises above her circumstances. In Red Sparrow, instead of rising above a corrupt world, Lawrence's Dominika simply becomes the most corrupt. 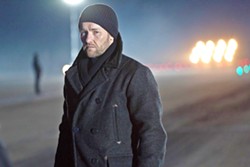 Anna She seems to be playing a game of cat and mouse with everyone around her. Why any of the characters put their trust in her, I can't understand. Every twist and turn leaves someone on the losing end, and if the goal is to leave the film feeling that Dominika was triumphant, it fails. Every aspect of the characters and storyline is laced with melancholy and corruption; there's no one I felt like rooting for. I agree that the chemistry between Edgerton and Lawrence was minimal at best, which is pretty disappointing as both have proven to be great performers alongside other counterparts. The film is a bleak, grinding journey with no silver lining to be had, no character likeable enough to root for, and uninteresting plot twists for the sake of plot twists. It feels almost like an excuse to let Lawrence play a mysterious sexpot, but I'd be much more impressed if they pulled off an interesting storyline as well. Unfortunately, this one just didn't grab me, and I'd wait for it to pop up on a streaming service I already pay for rather than shell out any actual cash to watch it. Δ