Redacted: What remains unknown from the NRC and PG&E about Diablo Canyon

Page 1 contains a short memo. Page 2 features a list of recipients. Pages 3 through 67, however, are blank.

Each page—in the public version of the document, anyway—is concealed by a white box, hiding the text the original recipients could access. While it’s not uncommon for documents from the Nuclear Regulatory Commission (NRC)—or any government body, for that matter—to be released to the public with some information redacted, this particular document was redacted almost in its entirety. Most peculiar, based on what’s known about the document, is that the redacted content outlines a plan to distribute information. The subject line reads, “COMMUNICATIONS PLAN - DIABLO CANYON POWER PLANT TOPICS OF INTEREST.”

But when it comes to documents about the Diablo Canyon nuclear power plant, the usual rules of disclosure don’t always seem to apply—at least according to Dave Lochbaum.

“They’re using bogus excuses to withhold information from the public in California, and in Diablo Canyon alone,” said Lochbaum, director of the Nuclear Safety Project for the Union of Concerned Scientists.

The redacted document is dated  Sept. 11, one day after the NRC made other documents public that pertained to former senior resident inspector Michael Peck’s Differing Professional Opinion (DPO), which alleged Diablo Canyon was in violation of its seismic licensing requirements and should be shut down pending a license amendment. NRC officials disagreed with Peck’s conclusion. Also on Sept. 11, PG&E released its years-long seismic studies, drafted in response to former Central Coast Assemblyman Sam Blakeslee’s AB 1632.

The near simultaneous releases (they were separated by a few hours) prompted at least one group, Friends of the Earth, to allege PG&E and the NRC colluded in order to generate positive PR for Diablo Canyon. Those allegations were partly fueled by an Aug. 24, 2014, email (1, 2) from NRC Office of Public Affairs Director Eliot Brenner marked “high” importance and titled “communications strategy on state report” with an attachment marked “state report messaging.” The subsequent bullet points were redacted completely.

Similarly, the Sept. 11 communications plan was also released under the Freedom of Information Act (FOIA). According to the un-redacted intro memo: “This communication plan describes the methods and resources that NRC staff will use to communicate with internal and external stakeholders regarding the DCPP [Diablo Canyon Power Plant] seismic history and ongoing seismic evaluations being conducted in response to the Japan Lessons Learned Near-Term Task Force recommendations.”

The memo says the plan specifically focuses on issues pertaining to the plant’s dry-cask spent-fuel storage, the review under AB 1632, and the “Sewell Report.” As New Times reported last August, Dr. Robert Sewell had raised his own concerns about potential tsunami vulnerabilities at Diablo Canyon. That report was also initially redacted in its entirety. About four months after New Times reported on the issue, the NRC made the Sewell report public.

Lochbaum said he’s seen about a dozen other communications plans focused on other nuclear power plants throughout the country “without a word being redacted.” But when Diablo Canyon is involved, he said the documents tend to be less transparent. 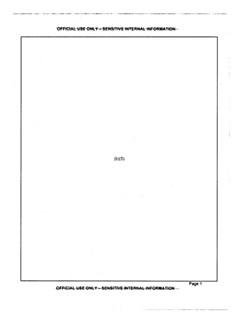 “The NRC’s got a position on Diablo Canyon whether it’s safe or not; the communications plan is the vehicle it develops—or the document it develops—for use by its staff in communicating,” Lochbaum explained. “… If that’s the purpose of this document, withholding it from that audience seems very telling about the forthcoming or candidness of the agency.”

In an email response about the report, and why it was withheld, NRC spokesman Scott Burnell reaffirmed that the NRC and PG&E did not collude before the AB 1632 seismic studies  went public.

“The shortest answer I can give you is that the agency has discussed seismic issues at Diablo Canyon for years, and based on that we’ve gathered pages of regularly accessed information,” Burnell told New Times in a response to a question about the communications plan. “Whenever a new issue comes on the radar—such as when PGE’s report to the state was well-understood to be close to issuance—we can add basic Q&A that apply even before the study is submitted.”

He said he would check with the NRC’s FOIA staff about the redacted portion of the document, but didn’t get back to New Times again before press time. Lochbaum said he was scheduled to meet with NRC Chairman Stephen Burns to discuss the commission’s policies on access to information.

“If you’re developing it for communications with those audiences, which includes the public, why do you withhold it?” Lochbaum said.

As of this writing, NRC staffers were also scheduled to receive the most recent and extensive analysis of Diablo Canyon’s vulnerability to earthquakes. On March 9, PG&E said in a press release that it had completed the report developed by the Senior Seismic Hazard Analysis Committee (SSHAC) and was set to send the results to the NRC for evaluation. According to PG&E, the SSHAC analysis found that Diablo Canyon “can safely withstand extreme natural events, including potential earthquakes, tsunamis, and flooding.”

Those findings echoed the September 2014 report sent to the state, which found that the recently discovered Shoreline Fault connects with the larger Hosgri Fault, and the features are capable of producing larger earthquakes than previously believed, but that Diablo Canyon was built with enough of a safety margin to hold up against the largest possible temblor. In December, NRC inspectors confirmed PG&E’s analysis of the seismic data, noting that the information would be incorporated into the larger SSHAC evaluation.

But there are still questions about the initial seismic analysis, according to San Luis Obispo County Supervisor Bruce Gibson, who holds a doctorate in geophysics and sits on the state Independent Peer Review Panel (IPRP) tasked with reviewing PG&E’s studies for the California Public Utilities Commission. During a recent interview, Gibson pointed to three massive binders on his desk, the contents of which were the first batch of seismic research—he hadn’t yet seen the SSHAC report. The IPRP still has unanswered questions about that first report, Gibson said, particularly about the level of uncertainty in some of PG&E’s calculations and about the ground motions near the plant when an earthquake strikes.

“They’re a little more certain of their result than we are,” Gibson said of PG&E’s calculated fault slip rate.

And PG&E canceled its most recent planned meeting with IPRP members while company officials gather more information on the 3-D velocity model and its level of uncertainty near the plant, according to an email PG&E Principal Seismologist/Geophysicist Stu Nishenko sent to the IPRP on Feb. 17, three days before the scheduled meeting. Nishenko wrote in that email that PG&E would prepare a written response to the IPRP’s questions, which have been unanswered since the IPRP issued its Nov. 21 and Dec. 17, 2014, reports.

PG&E Spokesman Blair Jones said the IPRP’s comments will be addressed, perhaps through the long-term seismic program, or as an update to the SSHAC analysis with the NRC. The company’s relicensing request for Diablo Canyon remains on hold, and Jones said, “We have a number of issues to consider before being in a position to obtain renewed licenses. This includes considering regulatory feedback on the advanced seismic research studies and the recent seismic hazard re-evaluation.”

Gibson, who’s one of the more outspoken critics of how PG&E has dealt with the IPRP, said there’s a general sense that PG&E hasn’t been forthcoming with information when panel members ask questions, and he believes it’s important to answer such questions to reach a “logical scientific conclusion.”

“I’m disappointed in PG&E,” Gibson said. “Because if they had engaged the IPRP in good faith, I think it would have been beneficial to their interactions with the public.”