Redwood bones: A local couple purchased one of the oldest buildings in Oceano, intent on refurbishing its former glory

It doesn't look like much now, but the small and dilapidated shack that sits at 1600 Ocean St. in Oceano is one of the town's oldest and most beloved buildings. Longtime community members say there's a lot of history on that property, which is across the street from the Great American Melodrama and has housed a general store, printing press, and a movie theater.

For the first time in decades, 1600 Ocean has a bright future, too.

Deb and Victor Early purchased the property in November 2020 after they saw a real estate ad for the building in the window of a shop in downtown Pismo Beach. The Earlys, college sweethearts who've been married for more than 30 years, moved to Pismo from the Bay Area around 2017 after spending years restoring a Victorian home there.

They've always liked big projects and preserving history, and when the Earlys first saw the building on Ocean Street, they envisioned all it once was and all it could be. It has strong bones and original features still intact that, with ample care and attention, could be the staples of a beautiful space. The project is still in its infancy, but the Earlys hope to fully restore the building and run a local business there once they retire, maybe a restaurant.

"We do want to make sure that whatever we do is kind of in line with the community," Deb said on April 22, as she looked up at the building's redwood frame. "We're lucky we're kind of next to the Melodrama too, so it's kind of this somewhat commercial space. But it's all residential on the other side so we want to be conscious of the—whatever we do with it—the community." 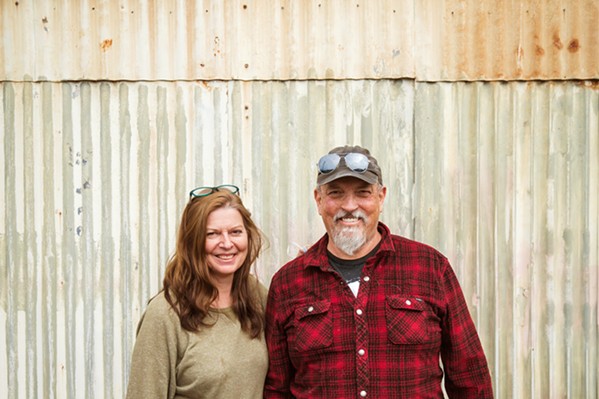 Since purchasing the property in the fall, the Earlys have focused on smaller-scale cleaning and restoration work. They launched an Instagram page (@oceano.dunesville) to document their progress, and they're holding off on big structural changes until they've obtained the appropriate permits.

Victor, a geologist, said there are some drainage issues to deal with and a lot of rotting wood, but much of the building is made from old-growth redwood that, after a little stripping and sanding, will continue to withstand the test of time. They ripped off the building's failing roof and three layers of plywood that had covered the front of the building for years, which the Earlys said actually helped to preserve the building's tall original entryway doors and 8-foot-tall window frames.

Victor said he expects the restoration, even with a whole contracting team, to take at least three years. Neighbors, he said, seem happy with the progress so far.

"There's a lot of people who go for walks around here, and they stop in and they're very excited that we're gonna do anything because it's been boarded up for decades and it was an eyesore," Victor said. "So we got a lot of positive comments."

Linda Austin is a lifelong Oceano resident and president of the Oceano Community Services District. With generations of family history in Oceano and as a longtime curator of the Oceano Train Depot museum, Austin is largely considered one of the area's leading historians.

The building at 1600 Ocean, built in 1896, is one of Oceano's last surviving facilities from the turn of the century, erected just a few years after the town itself first appeared on a map in 1893, according to Austin.

Beckett-Frakes General Merchandise was the first business to operate in the building, which Austin said had big wooden cupboards and shelving to hold the store's products and redwood molding that wrapped all the way around its interior. By the 1920s, Austin said the building had become a meeting space for the Oceano Chamber of Commerce, which formed in 1923, and other community events.

In 1925, despite the building's lack of plumbing and heat, it became a local movie theater. Austin said the theater owners used a hand-cranked projector to show films and a coal-burning stove to keep attendees warm. The theater's projectionist lived in Pismo Beach, Austin said, and would ride from Pismo to Oceano in a horse and buggy to show movies there. The first few movies that played in the theater were silent films, including The Burning of Rome (1909). 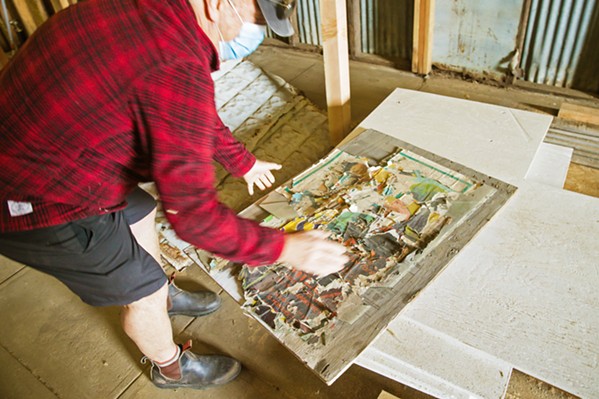 Years later, Austin said a printing company, the Halycon Press, started up in the building and eventually morphed into the Oceano Round Table Book Company in 1936, which printed the town's newspaper and a number of Dunite poem books. Eventually the printing press closed when the owner retired in the late '60s, and Austin said the building has essentially been used for storage ever since.

It was on the market for quite some time before it sold to the Earlys in the fall of 2020.

"We were so afraid when it sold they would tear it down," Austin said. "We're just thrilled to have them doing this meticulous restoration. It's just wonderful."

There's a lot of work left to be done, but the Earlys aren't afraid of a challenge. They're proud to be entrusted with the preservation of the building's past, and even more hopeful for its future.

"Hopefully, it won't fall down on us," Deb said with a laugh. Δ