You might know Reese Galido from her band The Kicks, a great reggae-inspired party band, but her new solo CD Unraveled reveals another side of the performer—one that’s Triple-A ready, as in Adult Album Alternative, a popular radio format that harkens back to the album-oriented ’60s and ’70s, designed for grown-up listeners with discerning tastes. Her album would fit right in rotation with the likes of Adele, Norah Jones, or Regina Spektor.

Galido—a folk, jazz, and soul singer—has a warm and inviting voice, and on Unraveled, her talent for composing tender, lush, and melodic songs is on full display. Her bio talks about listening to The Platters, Ella Fitzgerald, Dinah Washington, Sarah Vaughan, Filipino love songs, and Elvis on family road trips, how she got her start singing jazz standards, how she inherited her first guitar from her late brother.

“The songs she wrote at first were to help her understand the world around her again, and then they became vehicles for stories of great love and the stuff that fills the gaps in a broken heart,” her bio reads.

Indeed, her songs are about belonging, warmth, and togetherness. On “Bespoke,” she sings, “You feel like a coffee cup on a gray day, like my favorite shirt buttoned up against the chill, like a pair of sunglasses upon a sunny day. Cause you feel right here with me. You feel like you are made for me. And now everyone can see that you and I were meant to be.”

The album itself was recorded at Painted Sky Studios and produced by Chas Duncan of the father-daughter duo Ranchers 4 Peace, who said, “I had a blast working on this thing with her, and I’m still completely floored by the size of her talent.”

It’s a great record, one that I can listen to over and over. Check out Reese Galido when she and friends play a CD Release Party at the Steynberg Gallery on Saturday, Dec. 12 (7:30 p.m.; all ages).

“And now, the end is near, and so we’ll face the final curtain. My friends, I’ll say it clear, I’ll state my case, of which I’m certain.”

It’s been a long time coming, but live music—as we’ve known it—is coming to an end in downtown SLO. According to their website, SLO Brew on Garden Street will close up shop on Dec. 19, which leaves you two weekends to squeeze your last bit of fun out of the venue that’s been operating since 1988.

The new SLO Brew on Higuera and its sister operation The Rock on Broad near the airport are scheduled to open in “spring of 2016.” The new Brew will host a restaurant, microbrew and bar, outdoor beer garden, whiskey lounge, and an “intimate” live music venue, which I read as meaning smaller and more acoustic shows. For the big concerts, you’ll need to head to The Rock, which will feature an expanded brewing operation and tasting room, restaurant, larger outdoor venue, and an events space.

Frog and Peach will still be at it on a regular basis, but their concert space is very limited, which leaves Creeky Tiki and Mo/Tav’s occasional shows, singer-songwriter stuff at Luna Red and Kreuzberg, and Linnaea’s Café—which actually has a room dedicated to concerts but no booze. The only big downtown concerts I see in our future are ones booked into the historic Fremont Theater (Next up, Led Zeppelin and AC/DC tribute bands Led Zepagain and High Voltage on Friday, Jan. 22; and Paul Thorn on Sunday, Jan. 24, both courtesy of Numbskull and Good Medicine Presents—tickets at Boo Boo’s and tickfly.com).

Garage, punk, surf rock, and pop act The Tijuana Panthers return on Friday, Dec. 11 (7:30 p.m.; all ages; $12 presale or $13 at the door). They describe themselves as “not the happy-go-lucky beach boys you tried to pin them as, but more akin to sexually frustrated soda jerks in a David Lynch film.”

The final two shows—local funk act and winner of Best Live Performance at the New Times Music Awards Captain Nasty plays Friday, Dec. 18; and local pop punk act Night Riots play Saturday, Dec. 19, but you can read more about them in next week’s issue while I’m on vacation. When I return next year, I fear there’s going to be less music to write about, but the one thing that never changes is that change is inevitable.

Farewell, Garden Street SLO Brew! “The record shows, we took the blows, and did it our way.” 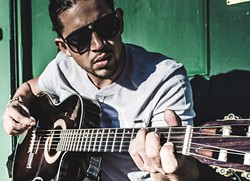 The Basin Street Regulars present their holiday “Hot Swingin’ Jazz” session this Sunday, Dec. 13, at the Pismo Vets Hall with an 11 a.m. jam (bring your instrument and join in), followed at 1 p.m. by The Royal Garden Swing Orchestra and then Pacific Swing ($10 at the door). Both SLO County bands feature top-notch players. Royal Garden is in its 28th year, delivering the swinging sounds of the Big Band era. Pacific Swing plays traditional, swing, bebop, Latin, and progressive jazz styles. Whether you want to listen, dance, or join in the jam, this is a great event for jazz lovers. Learn more at pismojazz.com. 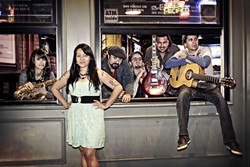 I’m checking out Alarma’s video for “The Last Train,” a cool mix of sepia-tone faux retro footage of a couple falling in love mixed with footage of a guitar-accordion-drum trio delivering their indie rock mix that shares some similarities with the likes of Gogol Bordello and Manu Chao—you can hear influences such as Latin cumbia, reggae, ska, African, Middle Eastern, and flamenco sounds. Check them out this Tuesday, Dec. 15, when the L.A.-based band, which fluctuates between three and six members, plays Frog and Peach (9 p.m.; 21-and-older; free).

Ron McCarley will lead Cuesta’s jazz ensembles through their paces this Friday, Dec. 11, at 7:30 p.m. in the Cuesta CPAC. This is a terrific venue with amazing acoustics and easy parking right out front, and the Cuesta music program can really deliver the goods. Tickets are $15 general admission or $10 for students and seniors (call 546-3198 or online at cpactickets.cuesta.edu). 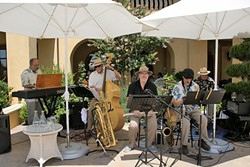 There are also two Cuesta College Holiday Choir Concerts scheduled this week, starting this Saturday, Dec. 12, at 7:30 p.m. in the Cuesta CPAC. This is a terrific venue with amazing acoustics and easy parking right out front, and the Cuesta music program can really deliver the goods. Whether you like gospel, vocal jazz, or choral, Cuesta’s groups—Voce, the Cuesta Chamber Singers, Encore, and the Concert Choir—put on a terrific show, which repeats on Sunday, Dec. 13, at 3 p.m. at St. Timothy’s Church (962 Piney Way in Morro Bay). Tickets are $15 general admission or $8 for students and seniors (call 546-3198 or online at cpactickets.cuesta.edu).

Holiday at the lighthouse 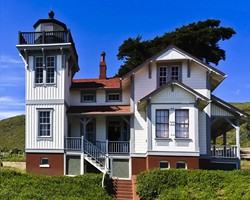 The tours feature “wine by Alapay Cellars, cider, savory and sweet treats, beautifully decorated historic buildings, and our ‘living history’ tours where all docents will be dressed in period attire,” explained organizers. “This is one of our signature events, and all proceeds help to benefit our ongoing restoration, education, and preservation projects.”