Reflections on ice: Taking a lap around the rink as 2015 grinds to a halt

Every year when I wake up on the day after Christmas, I kind of expect the tall decorated pine trees, the flashing lights, and even the so-called controversial red Starbucks cups to have vanished into the night along with old Saint Nick.

And every year I’m always surprised that these Christmas creatures are still lurking behind their holiday of choice. I’m no Scrooge; it just feels weird hanging onto Christmas cheer come Dec. 26, like being that one person who’s blasting Christmas carols in October.

So when I find myself at the Winter WonderSLO ice skating rink the day after Christmas with pine trees and Michael Bublé crooning “It’s beginning to feel a lot like Christmas” through the speakers and children frolicking and giggling about on the ice, it feels a bit like déjà vu.

It would have been an even better activity to do pre-Dec. 25, but there aren’t ice skating rinks in San Luis Obispo every day, so I take my shot, holiday propriety be damned. 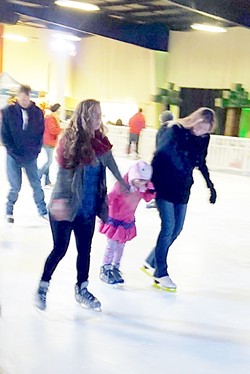 The last time I went ice skating was some 20 years ago, and I was but a mere tyke visiting my preschool BFF in Colorado, who went on to play ice hockey in college. I remember it was hard, and I spent a lot of time clinging to the rail.

This time I was going ice-skating with my friend Aquila who had never been before, so I figure this time I’ve got the upper hand. Not the case. Aquila, who is also an avid roller-blader quickly glides onto the ice with ease, even getting really dare-devilly and doing a baby jump. 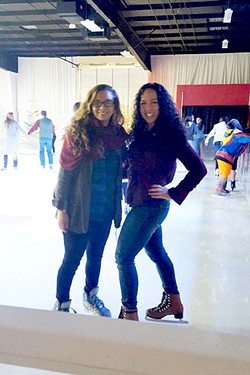 I wobble onto the ice a little less gracefully, hovering near the rail at first, and then, eventually venturing toward the center of the rink as I become more sure of myself, feeling like this cute and seasonal activity is both harder and easier than I remember, depending on how good my balance is at any given moment.

As I skate in this temporary, yet idyllic winter wonderland, I’m struck with the same thought that hits me every year around Dec. 26: “Crap, the year is almost over and what do I have to show for it?”

As I try to not eat ice, I mull over what 2015 has brought into my life. It had been a rebuilding year, as they say in sports, but things were on the up and up. Like ice skating, there were parts of this year that were harder and easier than I expected. While certain events tried to kick the crap out of me, there was many a triumph, I never totally wiped out, and all the while was surrounded by a motley, but loving crew of family and friends. And isn’t that all anyone can ask for?