Thirty-three local residents living with mental illnesses and on low incomes now have secure housing with the opening of the Bishop Street Studios in San Luis Obispo this month. 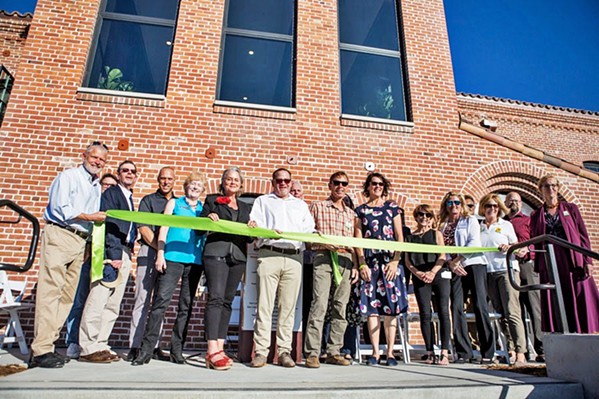 "It's remarkable," said Michael Kaplan, the community engagement director at TMHA. "You look at it now and really it's just sparkling."

Getting the formerly rundown property to sparkle again, though, was a tough, long haul. The $12 million project involved renovating the orphanage, adding three new buildings, and the resources and coordination of several agencies, including TMHA, SLO County, the city of SLO, and the Housing Authority of SLO. An amalgam of funding sources—like a $2 million TMHA fundraising campaign—made the apartments a reality.

"That was a lot of amazing collaboration," Kaplan said.

All 33 Bishop Street Studio tenants, plus a resident manager, are now moved into the complex. The studios and one-bedroom apartments will permanently house residents with diagnosed mental illnesses who've received services from SLO County Behavioral Health or a subcontractor, like TMHA.

Projects like Bishop Street Studios—called "permanent supportive housing," since the rents are heavily subsidized—are underprovided in SLO County. Many tenants struggled with being housed prior to moving in, Kaplan said.

"So many of them are at risk of homelessness and have even experienced bouts of homelessness leading up to getting to move in there," Kaplan said. "I talked to one woman who said 'Yeah, I was in a tent when I got the phone call saying that I was going to get an apartment.'"

As part of the selection process, TMHA had to determine that the chosen tenants would be ready to live independently in the units. Each tenant has a case manager from TMHA as well.

"All of these folks have demonstrated the ability to live alone and within a community setting like this," Kaplan said.

Kaplan said that some residents became overwhelmed with emotion when they were given the keys to their new apartments.

"There is that feeling of incredible gratitude," he said, "and 'oh my god, my life has now completely changed.' I would love to do that for another 200 people. That begs the question of, what's our next move and how do we keep this wonderful momentum going?"

As Kaplan noted, while Bishop Street Studios brings desperately needed affordable housing units to SLO, there's more work to do. There are about 300 people on the waitlist for the studios—and hundreds more in the community who are either homeless or on the brink of it. Kaplan told New Times that TMHA is exploring establishing a new housing fund, which would allow it to be more flexible and opportunistic in pursuing future projects.

"We just have to be ready for when opportunities present themselves," he said.

• SLO County Public Libraries and Friends of the Los Osos Library are hosting a second public workshop to discuss "important design elements" for the future Los Osos library. The workshop will be held on Dec. 2 at the South Bay Community Center from 6:30 to 8:30 p.m.

• The SLO Fire Department launched a new program called File of Life. Local residents can pick up information cards, available at all four SLO fire stations, where they can list all the medications they use, any special health conditions they have, and who to contact in an emergency. By posting it to their refrigerator or in another visible place in their home, it provides first responders vital information in an emergency. Δ