Reggae in the rain

Featuring hip hop rhymes that bust your face off

Nas and Damian Marley were playing a beachside show in Avila for their joint album Distant Relatives. I left Morro Bay by caravan, because the day’s theme was Africa, and I happen to keep it real that way.

The group consisted of friends from work, friends of friends, and two thirds of Trouble Hoof, a local band that just so happens to be playing a free show at Pizza Port on Sunday (I hear they’ll have beer there).

The cars were loaded with foldout chairs and umbrellas. There were plenty of sober drivers to go around. We were ready.

We were also early.

We got there with about two hours to kill and no real line to wait in. Courtney and her husband Limo set up camp near the cars, under the coverage of umbrellas and giant palm trees.

“They can handle themselves at this point,” he said. “We’re pretty much on our own.”

“It’s like moving out of your parents’ house all over again,” said Courtney.

I can’t wait. I love my kid and all, but I think I’ll love her tons more when the wife and I can leave her at home and party at concerts all day.

All in all, the pre-concert lounge-around was a rousing success, but it was time to cross the bridge to concert land. The main stage at the Avila Beach Resort sits between two streams that feed the ocean. It’s essentially an island, and with the lanky palm trees and moderate levels of precipitation, you could almost close your eyes and pretend to be in Jamaica. I did that a bunch of times.

I broke from the group and swung by the Forever Stoked tent to check out the art and see how the guys were holding up in the rain. They had painted surfboards set up with rows of small prints, hats, and hanging pieces.

“We’re having a good time either way,” he said. “What’s a little rain when Damian Marley’s going on stage?”

It was kind of cold out, and I was feeling drowsy for some reason when I spotted a coffee stand. I went for a cup, and just as I was thinking it would have been wiser to save the money for beer, the barista offered to mix it with Bailey’s. Coffee and liquor together! It was like he reached into my heart and pulled out a dream.

After the coffee cocktail, I was warmer, drunker, and more jittery. Everything was going according to plan. Courtney, Tina, and Megan had staked out the best spot by far with their umbrellas. It was a few yards from the beer tent and sat on the ledge of a putting green that formed a sort of tier, like an outdoor balcony.

Rey Fresco, a reggae band from Ventura, opened the show with a set that sounded a whole lot like Sublime. They had a harp, which was cool, and played a nostalgically delicious cover of Biz Markie’s “Just a Friend.” The bass was way too low for half the set, but the band was solid, and the music was the perfect back track as people got ready for the main act.

My Sober Sally’s name was Cindi, and she out-funned everybody, dancing non-stop and imitating Midwesterners. Jill and Caleb divvied out cans of Corona from a tin bucket while Dave tried to charm the ladies. Kyle did an anti-rain jig. It worked, of course. The clouds dispersed and a rainbow appeared. That’s pretty much when Nas and Marley went onstage. 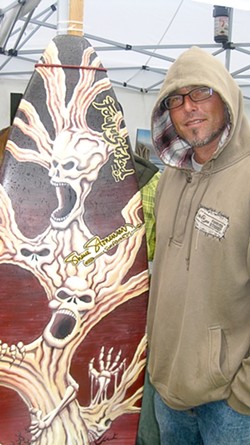 They had a full band and two DJs. People were banging on drums, pumping fists in the air, flailing dreads around. The girls singing back-up were belting it out, and there was a guy who marched around for the entire show waving an Ethiopian flag. Dude didn’t rest for a second, and he was up there for a good two hours, like the Hercules of flag waving.

There were no individual performances. Nas and Marley shared the stage for the duration, bleeding songs together almost seamlessly. They rapped about social justice, peace, and our common African heritage. The pounding rhythm drove the message home, even in a crowd of wealthy, white college kids.

The duo encored with their biggest single, “As We Enter,” and finished the night with “Could You Be Loved,” easily the dancing-est song of all time. It started as a flawless copy of the original Bob Marley tune. By the end, it was a remixed hip-hop track, and that wasn’t the night’s only twist.

As I stumbled back to the car, a benevolent burrito man appeared out of nowhere to give everyone free veggie wraps. I honestly never saw that one coming.

Intern Nick Powell abused his newspaper connections to score free concert tickets. He can be reached through Executive Editor Ryan Miller at rmiller@newtimesslo.com.