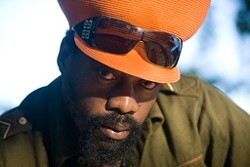 Sly and Robbie both grew up in Kingston and started laying down those irresistible beats together in the ’70s, creating a partnership that re-etched the landscape of Jamaica’s—and the world’s—music. Still touring and recording relentlessly, they’ve played on or produced an astounding 200,000 tracks for a huge range of international performers over the years, including Peter Tosh, Grace Jones, Joe Cocker, and even Bob Dylan, among many, many more. Their cutting-edge, immediately recognizable rhythms exemplified the “rockers’ riddims” of late-’70s reggae.

One of the top reggae artists in the world, singer Michael Rose (who also spells his name Mykal) was already a seasoned performer when he joined Black Uhuru. His charismatic stage presence and trademark wailing vocal style are eminently suited to the serious lyrics of his own brand of militant, hardcore reggae. As a solo artist in the ’90s, the “Ruff” Rose put out Jamaican singles produced by Sly and Robbie: “Monkey Business,” “Visit Them,” “One a We Two a We”. 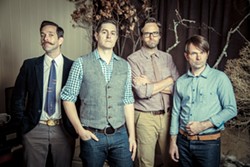 SLO Brew just keeps the great shows coming. Three-time Grammy Award-winners Jars of Clay, touring in support of their latest recording, Inland, along with Brooke Waggoner and Kye Kye, take the stage at the Brew on Friday, Sept. 20 (7 p.m., all ages, $20 advance and $22 door). Produced by Tucker Martine (My Morning Jacket, Beth Orton, The Decemberists) and mixed by Beau Sorenson and Jacquire King, Inland is acclaimed by The Hollywood Reporter as “an organic progression for a band that has throughout its career drawn from everything from synth pop to bluegrass, and also the output of a band that has perhaps found its truest voice yet.” It’s been nearly 20 years since Nashville-based Dan Haseltine, Steve Mason, Charlie Lowell, and Matthew Odmark released their debut, Frail, while they were still students. That same youthful ambition and uninhibited creativity are evident on Inland, with embellishments of violin, horns, and ambient melodies that attest to their two decades of experience.

San Francisco indie rock band the Fresh and Onlys—part of the city’s “new garage rock” movement—play an all-ages, 8 p.m. show on Wednesday, Sept. 25 at SLO Brew. Tickets are $12 advance, or $14 at the door.

And if you haven’t bought tickets for two other SLO Brew shows, you’re out of luck. Tech N9NE on Saturday, Sept. 21 and Jimmy Eat World on Tuesday, Sept. 24, are sold out. What did I tell you about snoozing?

Ambassador of the blues

Guitarist James Armstrong was born to play the blues, with a blues singer mama and a jazz guitar-playing dad. He formed his first band in the 7th grade in L.A. and started touring the country when he was still a teenager, later playing with Smokey Wilson and Albert Collins, and signing with High Tone Records. But a home invasion left him with nerve damage that dictated a new style of playing: “The power in slow blues, how the silences between the notes are as important as the notes,” as Armstrong himself puts it.

“The blues is evolving like every other genre. You can be authentic and contemporary at the same time. It’s all about balance,” he says.

These days, Armstrong has a reputation for a confident stage presence that combines grace with mischief, playing the crowd as he shifts dynamics from a whisper to a growl. Catch James Armstrong at a SLO Blues Society dance concert on Saturday, Sept. 21 at 8 p.m. at the SLO Vets Hall. Mojo Combo—winner of a New Times Music Award—opens the show. SLO Dance offers free dance lessons at 7:30 p.m. Tickets are available at the door for this 21-and-older show, $20 general or $17 for Blues Society members. Three cheers for the hardworking volunteers of the SLO Blues Society! And if you’d like to volunteer for a couple of hours, you get into the show free, and you get a free drink; call 541-7930 to sign up.

Keeping on the sunny side

Acclaimed local jazz singer Dawn Lambeth is bouncing back from a maternity-leave break for the North SLO County Concert Association’s first performance in this year’s series. Dubbed “On the Sunny Side of the Street,” this show is dedicated to the Swing Era with songs by George and Ira Gershwin, Irving Berlin, Cole Porter, and Hoagy Carmichael, among others.

“We’ll start in Hollywood, with selections introduced by Fred Astaire and Ginger Rogers in their 1930s MGM masterpieces. And we’ll finish our afternoon with a little trip to the streets of Paris as we feature our guitarist, Charlie Baty, on some gypsy jazz ala the wonderful guitarist Django Reinhart,” Lambeth writes.

Dawn Lambeth will be joined by a topnotch band, with Marc Caparone on trumpet, Chris Dawson on piano, Dylan Johnson on bass, and “Little Charlie” Baty on guitar—the former bandleader of Little Charlie and the Nightcats, who combines a strong Charlie Christian influence with a jump blues background. Heck, he even adds shades of traditional jazz, gypsy jazz, Brazilian music, and even polka in his inimitable, whimsical style. 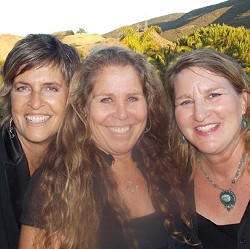 Ever notice how so many local musicians throw their talent behind worthy community causes? That’s certainly the case with Santa Margarita-based trio Chick Tuesday. Named for a weekly backyard women’s songfest, this endearing ensemble features dulcet harmonies and plenty of familiar tunes.

Singer Sharon “Buffy” Doran—who can play guitar, dulcimar, stand-up bass, and hand drums, so far!—has been performing locally for years, with Viper Six, the Croon Dogs, and the Blissters with Jill Knight. Flute player and singer Sarah Jane Weiss had a band in Maui before coming back home to SLO County. And singer-percussionist Karen Wilkins, who called herself a “shower singer” before she joined a choir and then blues band Life at the Top a few years back, has always loved harmonies. Together, these gals work magic.

Now Chick Tuesday is coming out to support their community, when the Friends of the Santa Margarita Library hold a fundraiser on Friday, Sept. 20. Dubbed “An Evening in Santa Margarita,” the event starts at 5 p.m. in the town’s new “arts district,” where local artists have set up three separate studios (across from the Ancient Peaks tasting room). The singing sensations start out there, before heading down the street to The Barn for an ice cream social. Dunbar Brewery is providing a barbecue.

“We love to play for audiences who appreciate us. And we’ll do anything for Santa Margarita!” Wilkins says.

Longtime local Spanky Baldwin is hittin’ the road again, playing his way to the East Coast and back over the next couple of months. His Launch Party is Thursday, Sept. 19 at Pappy McGregors in SLO. “Hope y’all can come kick me out o’ town,” Spanky writes.

Bay-Area based acoustic blues trio Mighty Mississippi puts some Southern comfort in their juke-joint inspired sound. Hear their heartfelt tunes on Friday, Sept. 20 at 8 p.m. at D’Anbino’s wine tasting room in Paso Robles. Admission is $10; $5 for club members. Then it’s Jazz on the Vine, nine of the Central Coast’s finest musicians playing big-band standards as well as contemporary jazz, on Saturday, Sept. 21 at 2 p.m. Your $5 admission includes a tasting fee; free for club members.

The free Court Street Summer Jazz series in downtown SLO Town presents its final show for the season, with Larry Arone Latin Jazz, featuring Maite, upstairs by Pottery Barn on Saturday, Sept. 21 from noon to 3 p.m. Fans of Latin jazz have long embraced local pianist Larry Arone, and he sounds even better with the talented Maite, perfect for a sunny afternoon.

Let’s face it, the burgeoning winery scene has been a boon for local musicians, making it just a bit easier for talented players to make a living doing what they love. Longtime local faves the Mighty Croon Dogs provide the musical entertainment, and perhaps even the inspiration, for a gourmet “haute” dog event celebrating the dog days of summer on Saturday, Sept. 21 at 2 p.m. at Adelaida Winery. Tickets are $15, or $12 for wine club members. The hardworking Mighty Croon Dogs are also the featured band at Grover Beach’s free Sizzlin’ Summer Concert Series and Farmers Market on Sunday, Sept. 22 at 3 p.m. Catch the dueling guitar work of father and son Billy and Charlie Foppiano!

The Village of Arroyo Grande’s popular free summertime music series is drawing to a close—boo hoo! But they saved the best for last: Inga Swearingen and Guy Budd on Sunday, Sept. 22 at 1 p.m. in the Rotary Bandstand. The two plan an acoustic first set, incorporating their many influences. Their second set steps up the pace with blues, jazz, and rock tunes, along with Guy Budd’s band Gypsy Souls, featuring Andy Kulikowski on bass guitar, Howard Emmons on drums and percussion, and Ken Burton on keyboards. Inga’s enchanting and joy-filled vocals are always captivating, providing a sonically interesting counterpoint to Guy’s hard-driving guitar work. And you heard it here first: Guy Budd is planning to put out a new CD before the end of the year.

The historic Pozo Saloon is winding up its concert season, but not its live music performances. Their back deck is an intimate and relaxing spot to enjoy free live music in a country setting on Sunday afternoons. Next up is Ted Waterhouse and the Terraplanes on Sunday, Sept. 22 at noon. Trust New Times Music Award-winning songwriter Ted to come up with a new sound, again!

Canadian singer-songwriter Dan Frechette and California violinist-singer Laurel Thomsen have played more than 60 shows and festivals since meeting on the Internet. They’ll present a free show at Sculpterra Winery in Paso Robles in Sunday, Sept. 22 at 1 p.m. Also in the lineup are George Nauful, Dulcie Taylor, and Rachel Efron. Dan Frechette and Laurel Thomsen are joined by Pi Jacobs and Loren Radis on Saturday, Sept. 21 at 1 p.m. at Laetitia Winery.

“Sweet Home Alabama” and “Free Bird” are just two of the classics from Lynyrd Skynyrd, known for introducing the world to Southern hard rock in the ’70s. They rock the Vina Robles Amphitheatre on Sunday, Sept. 22 at 8 p.m. Opening the show is self-described “redneck blues band” Neon Russell, a local outfit formed by retired film and TV music writer Kent Earl Houseman, along with Curtis Taylor on guitar, Reb Blake on bass, Jere Sullivan on harmonica, and Wyatt Lund on drums. Tickets are $54 to $104, available at vinaroblesamphitheatre.com.

Triple Down Theory is basically a pared-down version of Unfinished Business, focusing on covers of rock guitar tunes of the ’60s and early ’70s. They’ll be playing the next free Schoolhouse Rock concert at Salisbury Vineyards (see what I mean about winery gigs?) on Sunday, Sept. 22 at 1 p.m.

Kiki Ebsen of Christopher Cross Band—who happens to be Buddy Ebsen’s daughter) has also backed up Boz Scaggs, Tracy Chapman, and many more. Hear her at Bon Temps Creole Café in SLO on Monday, Sept. 23, along with Kirk Nordby, Albert Sanudo, Julian Temple, and Banjer Dan.

And in the silver linings department: At least now you don’t have to choose between Michael Rose with Sly and Robbie at SLO Brew and Thievery Corporation at the Avila Beach Resort, both originally scheduled for Sept. 19. The Thievery Corporation show is not happening, and anyone with a ticket will be issued a refund. See you at the Brew!

Kathy Johnston is filling in for Glen Starkey while he’s enjoying Catalina (the island, that is). He’s back next week, so contact him at gstarkey@newtimesslo.com.