The Morro Bay Planning Commission rejected an appeal opposing the conversion of a hotel to a drug and alcohol recovery facility, despite public objection to the project on April 20.

During the commission meeting's public comment period, resident Tim Gailey said he's responded to facilities similar to what's proposed while on duty as a fire captain and does not agree with its location in North Morro Bay. 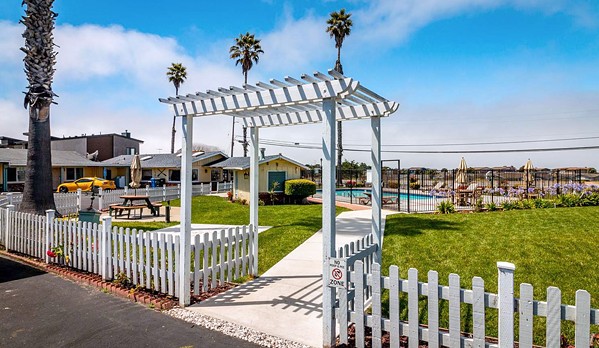 "I totally agree with having these facilities. I think it's an important part of services that we can offer to communities and to, you know, people that really need that help. I think it's a great thing, but this location just does not work in our city," Gailey said.

Twins Bay Inc., owner of the Rodeway Inn in Morro Bay, applied for a minor use permit in December 2020 to convert the 27-room motel at 2460 Main St. to a supportive housing and recovery center. The permit request was granted in February of this year.

In March, Ashley Smith, a concerned resident and parent, submitted an appeal of the approved permit because she said it did not adequately address the facility's impact on public safety, business, and tourism.

Since the permit's approval, the Planning Commission received 167 emails that either blatantly opposed the project, weren't aware of the proposed recovery center, or supported the facility's proposed use.

The property off Highway 1 is surrounded by restaurants, motels, and homes. In emails and public comment, residents said they felt that the facility would increase crime, questioned the type of clients it would serve, and stated that it wasn't safe for Morro Bay High School (nearly a mile away from the property) students and children playing at Cloisters Community Park (located on the other side of Highway 1).

Morro Bay resident Diane Walling questioned the character of the proposed facility's program director, Oganes Nardos, who she accused of having a criminal history.

According to an LA Times story from 2010, Nardos was convicted of being an accomplice in a fraud scheme that sold immigration letters to convicted felons that allowed them to stay in the U.S. and avoid deportation.

During the meeting, Nardos said he's not ashamed of his criminal past, adding that he committed the crimes in return for money to purchase drugs.

"By the grace of God I'm 10 years sober now, I'm a certified counselor, and I practice in three facilities in California and one in Nevada. I'm also a program director, which means three to four times out of the year the state of California does a background check on me that's appropriate to the programs we offer," he said.

Planning Commission Vice Chair Susan Stewart thanked Nardos for his candor in talking about his past.

"That's a brave and challenging thing, and I think the goal of a program like this is to rehabilitate people, and when people get rehabilitated they often want to go back and serve that population to help other people hopefully come back into society," Stewart said.

According to the Housing Accountability Act, the opposition voiced during public comment isn't evidence that the Planning Commission can use to reject the proposed project. Commission staff explained that the Housing Accountability Act states if a housing project complies with the city's zoning code and its general plan, and there isn't tangible evidence of harm, then the project has to be approved.

If the commission failed to approve the project due to public opposition, it would be viewed as discriminatory and could subject the city to fines or a lawsuit. The four-person commission agreed that their hands were tied and unanimously rejected the appeal of the proposed rehabilitation center.

"It is on all of us as a community to be watchful, to be careful, but also to be helpful to hopefully help these people rise to the best that they can be rather than making an assumption that they are going to fail. It's in all of our interests," Stewart said. Δ