Growing up, comedian Anjelah Johnson just couldn’t sit back and have a good time at the movies.

“I would just go to the movies and I wouldn’t enjoy the movie because I was mad I wasn’t in the movie,” Johnson said. 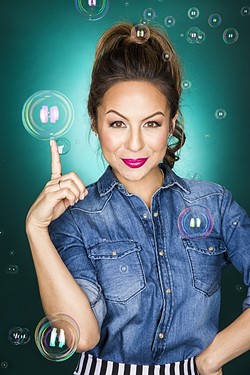 While Johnson has yet to star in a feature film, her career has taken a different turn, leading her perform her now popular comedy routines on MADtv, Comedy Central, and Netflix. Johnson will do her stand-up routine at the Cal Poly Performing Arts Center on Oct. 5 (with up-and-coming comedian Mal Hall opening the show).

“It was kind of an accident to be honest,” Johnson said of her comedy career.

After a year working as a professional cheerleader for the Oakland Raiders and winning the squad’s rookie of the year award, Johnson packed up her pom-poms and moved to Los Angeles to finally pursue her dream of becoming an actress. In her new city, Johnson, who is a Christian from a family of Mexican and Native American descent, started attending a church filled with creative types from all areas of show biz. A stand-up comedian was offering a free class at the church and suggested Johnson take it.

“When you’re a struggling artist, it’s like get in where you fit in,” she said.

During that class Johnson wrote her bit “Nail Salon” about the comedic moments of getting your nails done, from the upselling on additional services (“You like crystal gel? Only $6 more.”) to having that vague feeling the manicurists are talking smack about you in their native tongue, and the video went viral in 2007. That same year, she joined MADtv as a cast member, gaining even more of a loyal following with her character Bon Qui Qui, a disgruntled fast food employee at King Burger (“Welcome to King Burger, where we can do it your way, but don’t get crazy.”), who either flat-out ignored customers, convinced them to order less complicated items, or even had security kick them out for disagreeing with her.

While crazy characters and anecdotes occasionally make it into Johnson’s jokes (folks in SLO can look forward to the tale of a masseuse falling asleep during Johnson’s massage), the wisecracking lady prefers to focus on the humor found in the mundane moments of everyday life.

“I love to relate to people, I Iove to connect and share stories from my life,” Johnson said. “Most people have a mother, father, sister, brother, husband, or wife. It’s really just about finding those normal things that are funny and relatable.” On the more mundane end of the comedy spectrum, Johnson recounted how she saw a girl at the gym go to the bathroom and not wash her hands, and of course that same gym-goer ended up working out right next to Johnson.

“It was disgusting, but not wild and crazy,” Johnson said. “It’s real.”

Audiences at the PAC will get to enjoy a sneak peek at some of the material going into her new one-hour special, including that crazy sleepy masseuse story as well as tales of Johnson and her husband’s (Christian rapper Manwell Reyes) foibles in buying a new house and insights on her mom.

“I love making people laugh and bringing joy to people,” Johnson said. “I get to travel and bring people relief, even if it’s just for an hour and a half.”