Bladerunner Day Spa, a longstanding stop for locals looking for a new look, recently unveiled a new look of its own.

An Oct. 27 open house marked the salon's 20th anniversary celebration and grand re-opening, bringing hundreds of visitors through the new and expanded location. The house of style and relaxation now styles itself as even more of a "downtown mecca" for the latest hair styles, nail treatments, and spa services.

Looking for a new 'do? Stop by. Want to treat your fingers right? 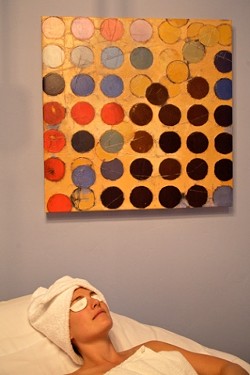 # Let them do the walking into this new space. Just want to zone out and let someone else pamper you into a state of blissful indulgence? Pull up a chair or something more horizontal.

Owners Todd LeMay and Stephen Patrick transformed a former Kinko's location into a relaxing destination that takes visitors around the world without ever leaving San Luis Obispo.

They designed the cutting room to reflect a moody open-floor feel reminiscent of New York or Milan. The 18 hair stations give visitors ample opportunity to sit down and style up.

The spa area separated behind two doors, noted promotions coordinator Cindy Mayr boasts five treatment rooms and a deep-red contemporary Asian theme. A meditative waiting area adds to the calm, as does the silent hall that protects the treatment rooms from external noise. Feel the hush.

Available packages include "Venus Goddess of Beauty" and "Zeus King of the Gods." A staff of 34 professionals will work together to make every visit one to remember, sending you back into the real world with a hazy grin and lack of tension.

LeMay and Patrick attribute their success to elbow grease, diligence, and attention to detail. Of course, they also say they couldn't be where they are now without their "terrific clientele." They're self-proclaimed sticklers for client satisfaction and have developed a precise operation procedure manual based on perfecting their craft, which means you'll have even less to worry about while someone else is catering to your treatments.

And as for the name: Does it hail from the decidedly un-relaxing Harrison Ford film about killer androids?

Mayr explained that the name actually came to LeMay one day before he saw the movie. He was "thinking of something to do with scissors and shears," she explained, "cutting edge."

There are no intentional ties to the 1982 film, so don't worry about Daryl Hannah flipping in and going crazy. Just sit back, relax, and let the professionals take over. You'll be glad you did.

Send your information for Strokes and Plugs to kvelie@newtimesslo.com.