Carty Holland knelt at Jesse Cutburth's feet and began untying the rope that bound his legs to a generic-looking chair with a metal frame. Carty's nephew, James Tavener Holland, worked to undo the rope around Cutburth's arms and torso.

They came loose. Cutbruth stood. The three men hugged and Cutbruth stepped away from the chair he'd spent the last two hours sitting in. 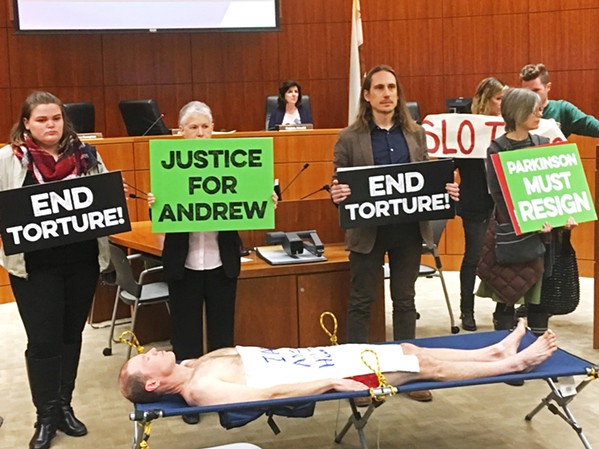 Cutbruth was one of 23 individuals who spent the last two days taking turns sitting tied to the chair in front of the San Luis Obispo County Courthouse to raise public awareness about the death of Andrew Holland, a schizophrenic man who died in SLO County Jail last year after being strapped into a restraint chair for 46 hours. The protest began March 17 and ended March 19, with individuals continually sitting in the chair through the day and night in two-hour shifts.

"It just hit me all over again how long and mercilessly my son sat in this chair," Carty, Andrew's father, told the crowd that gathered outside the courthouse.

The protest was sparked by the publication of long withheld jail surveillance camera footage of Andrew's stay in the chair and subsequent death. The SLO Tribune published portions of the footage on March 16. The scenes directly contradict statements made by the Sheriff's Office following the death, including that Andrew was "found unresponsive" in a cell. Instead, the footage shows correctional officers watching as Holland writhed on the floor of his cell shortly after being released from his lengthy stay in the chair, where he was placed naked with nothing but a blanket and not allowed to get up to use the restroom. The footage, which has no sound, also shows what appears to be a jail deputy smiling and laughing as he stands with other staff near Andrew's body.

The video's release reignited public outrage and renewed calls for SLO County Sheriff Ian Parkinson, who is currently running for re-election, to resign. Shortly after the footage was made public, Parkinson responded in a written statement. According to Parkinson, the Sheriff's Office contacted county Behavioral Health multiple times to request a transfer to the county's psychiatric care facility, but it was refused. The agency claimed there were no beds available. Parkinson said that the claim was untrue and added that two doctors failed to adopt a plan to involuntarily sedate him.

"The Sheriff's Office had no alternative other than to place Mr. Holland in restraints," Parkinson's statement read.

James Tavener pushed back on those assertions in an interview with New Times at the March 19 protest, stating that Parkinson had taken "no responsibility" for Andrew's death.

The statement did little to quell protesters and critics. On March 20, a group of protesters carrying signs and a man on a stretcher partly covered with an "I am Andrew Holland" banner shut down the morning session of the SLO County Board of Supervisors regular meeting. The group of about 15 interrupted the meeting just after 9 a.m. and stood silently at the front of the board's chambers. Board Chairman John Peschong called for a 10-minute break, while the protesters remained in their positions. When the board returned from the break, Peschong asked the protesters to step down, but they refused. Peschong then adjourned the meeting until 1:30 p.m. The group exited the building chanting, "How do you spell guilty? I-A-N."

For the Hollands, the very public response to the video's release was heartening, a sign that the message they'd been publicly and vocally making since their son's death is being heard.

"It's not just one voice crying in the darkness," Sharon, Andrew's mother, told the crowd gathered in front of the courthouse on March 19. "We are going to have a choir here, and this is exactly what is necessary to have the types of changes that need to happen." Δ