Religion in the time of corona: Celebrating major religious holidays during the pandemic is changing the way people act on their faith

The 24 hours between March 11 and March 12 were all that Congregation Beth David, a Reform Judaism congregation, needed to close its doors due to COVID-19 concerns.

The San Luis Obispo-based congregation was in the middle of organizing a March 14 concert, according to Office Administrator Robyn Friedman O'Leary.

Congregation Beth David began planning for COVID-19 in late February, but the County Health Department told them on March 11 that the concert was still OK to organize with safety precautions. The turn of events from keeping the show on to closing the congregation "seemed like it all happened very quickly," Friedman O'Leary said.

"Within 24 hours, we were all realizing that the risk was too high," Friedman O'Leary wrote in an email to New Times. "It was painful because we are in the business of bringing people together, but it was an easy decision to close down because it was what needed to be done."

Congregation Beth David closed its doors to the public one week prior to San Luis Obispo County's shelter-at-home order, which went into effect on March 19 and left all religious institutions in the same place—without a communal space for worship.

Cal Poly religious studies professor Stephen Lloyd-Moffett said this isn't the first time religious communities haven't been able to worship in public. War, persecution, and past pandemics are among the reasons why people have been unable to congregate. These times are often the most trying for people of faith, Lloyd-Moffett told New Times in a Zoom call.

"And it's precisely the time when people lean upon their faith, but that faith is expressed through communion with others," Lloyd-Moffett said. "Prayer can do amazing things psychologically and spiritually, but it can never fully replace a hug by a fellow parishioner or a hand of support when one needs it."

April was an important month for three major Abrahamic religions—Judaism, Christianity, and Islam—because of religious holidays occuring during the month.

Passover, a Jewish holiday commemorating the Israelites escaping slavery in ancient Egypt, took place from April 8 to 16. The first day or two of the holiday begins with a dinner known as the seder, in which people gather around the table to retell the story of Exodus. But as a result of the pandemic, traditional seders were no longer viable. Instead, many held their Passover seders online using video conferencing software, including those at Congregation Beth David.

"The learning curve for some of our less tech-savvy congregants has had a few small bumps, but overall the shift has been fairly smooth," Friedman O'Leary wrote. "Everyone has been positive and realizes that in spite of the inevitable glitches that we're all doing the best we can." 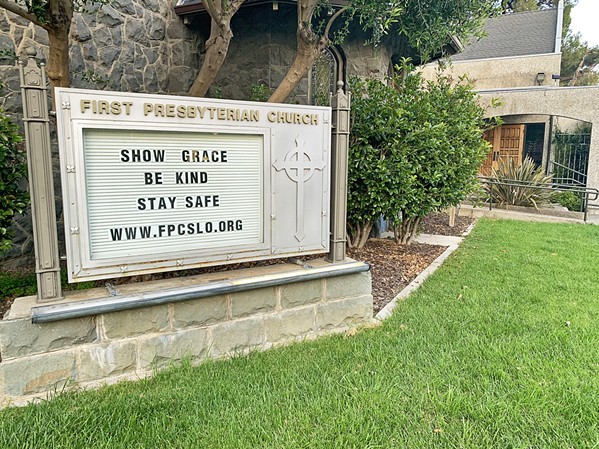 The pandemic's timing during Holy Week and Easter added pressure for Rev. Ian Delinger with St. Stephen's Episcopal Church, who had to find a way to help his parishioners remain connected with God "in a way we haven't done before"—through audio production.

With nine years of radio production experience and a master's thesis that focused on using radio in a more ministerial fashion, he asked St. Stephen's choir members to record songs on their phones for his service. He also spoke with four parishioners to talk about the four rituals that take place in Holy Week's Monday and Thursday services: washing of feet, giving communion, stripping the altar, and sitting in church to emulate the experience of sitting in the garden of Gethsemane.

"Doing the audio service allowed me to draw in more people and illustrate that the church is not a building. It's the people," Delinger said. "And that's what we emphasize from the earliest age."

Ramadan, the holiest month in the Islamic calendar where Muslims fast from dawn to dusk, began at sunset on April 23 and continues through May 23's sunset.

For Muslims, Ramadan is a community event on top of being a religious event. Many break their fast together in the evening, said Hisham Assal, a board of directors member of the Islamic Society of San Luis Obispo County. The iftar meal eaten to break the fast, however, will not go on as a community event because of the pandemic.

"This is canceled this year, and that's heartbreaking," Assal told New Times. "We're trying to come up with alternatives doing that at home. Maybe meeting online just to chat and exchange experiences of how people are doing and how they're handling the services."

Despite the loss of its community connection this year, Ramadan's religious aspect will continue.

"The actual act of worship is fasting throughout the day, so that is not affected by the current conditions," Assal said. "The social part of it, which is doing this prayer in congregation, is the one that's affected by it. So we're planning to be doing that at home, just with family members and so on."

Ramadan, for Assal and other Muslims, is an opportunity to read the whole Quran throughout the month—starting the book from the very beginning, going through its entirety, and becoming a part of the book, he said.

One verse that stands out to Assal during this time refers to God issuing hardships and tribulations, loss of sustenance, and loss of life, but God also giving good tidings to those who are patient through it. It's also the verse that has been repeated among Muslims since the pandemic's rise, according to Assal.

Much of Congregation Beth David's services—including Rabbi-led and layperson-led services, religious school and other educational programming, and social events—have transitioned online, according to Friedman O'Leary.

"We are using platforms that allow us to see and speak with each other, giving everyone participating the ability to socially connect," Friedman O'Leary wrote. "Rabbi Rick [Litvak] has shaped many of the services to fit these trying times with prayers and sermons about the pandemic, bringing us all some much needed comfort."

In addition, the congregation has reached out to its congregants via phone to check in on them.

"There's a lot of love here and the physical distancing doesn't change that," Friedman O'Leary wrote.

The pandemic has made Delinger feel strongly to fulfill his call from God, his duty as a priest, and to find what his call to the priesthood requires him to do now, he said. Delinger said it comes down to two priorities: pastoral care and spiritual engagement of his parishioners.

"It's not about being comforted, it's about fulfilling my vocation," Delinger said. "What comforts me is knowing that I can still let out my vocation and still help people nurture their relationship with God."

Even if churchgoers can't get online, Delinger said he wants everyone at his church to access worship. He has sent his old phones filled with previous sermons to those without computers, and he sent USB flash drives to those without internet access.

"My relationship with God, which is at the root of my vocation as well, is in the sacrament," Delinger said. "So being able to go into my church on Sunday morning and celebrate mass—it's very comforting to me."

How these current changes will impact the way in which religion is practiced decades from now is yet to be known.

Friedman O'Leary's children joke with her that she can wear her slippers when going to temple because of online worship's novelty. But she said she enjoys it now, having found a rhythm for it.

He spoke about religion's ever-evolving nature, noting how guitars were nonexistent in American Christian churches 50 years ago but are now widespread. He also said every person's need for community, mystery, transcendence, and ethical guidance remains present and that they are unifying desires among humankind.

"It seems to always find life and amplify," Lloyd-Moffett said of religion's nature. "And it seems to find especially vivid life when the human needs are greatest." Δ

Editorial Intern Francisco Martinez can be reached through Editor Camillia Lanham at clanham@newtimesslo.com.