When law enforcement first referred to Watson in press briefings, they called him a transient, which his sister-in-law Andrea Esquer said is false. 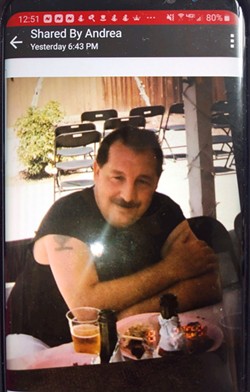 Esquer told New Times she and her sister, Evonne Stover, maintained a close friendship with Watson despite his separation from Stover.

Stover said she met Watson 25 years ago at a restaurant where he was a dishwasher and she cleaned.

"He walked in one day carrying firewood, and that's when we first met," she said.

Six months into their relationship, Watson moved into Stover's studio and helped raise her daughter as his own. Eight years later, she said, Watson was diagnosed with bipolar disorder.

"He was taking medicine to curb that, but he was such a gentle man no matter what. He would never hurt anybody, and he was always worried about everybody else," she said. "And that's what I loved about him."

Watson's biggest supporter, Stover said, was his mother, and he loved his family.

Stover said they were together for 15 years. Watson ended their relationship because of his illness, but the two remained very close friends.

"He was just a compassionate person that cared about everybody," she said.

Watson lived in an apartment on Spring Street, and would often invite his friends from the homeless community to stay with him. Stover said Watson got kicked out of his apartment because of his overnight guests, and eventually he began sleeping on a mattress at the Amtrak station.

Stover would visit him or see him around town in Paso Robles. In March of this year, she said, Watson suffered from a brain aneurysm and recovered, but Stover felt he started declining after that happened.

She tried to get him assistance from various mental health services in the area, but said she couldn't get him the help that he needed. Esquer said the community of Paso Robles knew Watson as the flower bandit because he would give store workers flowers or compliments.

"Everyone was his friend, and he never saw anyone as a threat," Stover said.

On June 8, Stover said she went to the Amtrak station to take Watson clean clothes. The two went to Food 4 Less to get him a snack—his favorite: a banana cream pie and a diet Pepsi. They also went to get new shoes because his were worn out and uncomfortable.

She asked him if he was OK, and Watson said he wasn't. He sat in the passenger seat of her car and prayed, she said, and then asked to be taken back to the Amtrak station.

The following day, June 9, Stover drove by the station with her stepdaughter and saw Watson sitting on his mattress. She resolved that she would go visit him later, but didn't end up doing so. That was the last time she saw him.

Investigators said they believe Watson didn't anticipate the gun shot that killed him. Esquer said she believed Watson was in pain, and despite the tragedy, they're thankful he's not hurting anymore.

"I just want people to know he was not a transient. He was a part of the community and a family man," Esquer said.

Watson's biological son from a previous relationship, Johnny Watson, posted on his Facebook account that his father would be put to rest on June 22 at First Baptist Church in Paso Robles, just three days before his 59th birthday.

"And want to welcome all our loved ones and the community that stood behind us every step of the way, thank you," the post read. Δ