Remove, under God, from the Pledge of Allegiance 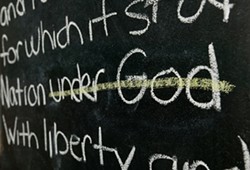 I pledge allegiance to the flag of the United States of America, and to the republic, for which it stands, one nation, under God, indivisible, with liberty and justice for all.”  Every single morning of their compulsory school life, students have uttered this simple pledge without realizing just how contradictory the words really are. We are taught from an early age what, it is believed, we should know: our ABCs, our numbers, how to share, and that our nation is under an almighty, all-knowing figure named God. Our nation, whose people hold it self-evident that “all men are created equal,” exists under God, an entity of which millions of our peers and fellow citizens do not believe. How equal is that? The phrase “under God” has no place in the Pledge of Allegiance.

It must be noted that the phrase blatantly violates the Constitution. The Establishment Clause of the First Amendment states that the government should in no way endorse any form of religion, and yet our national Pledge of Allegiance includes a heavily Judeo-Christian viewpoint. This undermines those who do not share this belief—precisely why the First Amendment was added to the Constitution as a protection. It is appalling that such a segregating phrase should exist in an important pledge recited in the land of the free and home of the brave.

The phrase “under God” wasn’t initially in the Pledge of Allegiance. President Eisenhower added it in 1954 to distinguish America from “godless communism.” Think about that. How does that flimsy reason justify isolating so many people? There are millions of devoutly religious people who just don’t worship an almighty power with the moniker God. What happened to their deity, or deities? We completely omitted them from our minds but they’re our neighbors, they’re citizens, they’re Americans.

Some argue that the phrase simply describes the values upon which our country was founded and can’t be offensive. Yes, the majority of our founding fathers were strict believers in God, but that does not mean they would endorse the inclusion of the statement. Think for a moment about the important documents they wrote: the Declaration of Independence and the Constitution. How many times do those documents mention God?  The answer is never. The founding fathers understood how sticky tangling religion and government is, especially in a country that welcomes all beliefs. Had they written the Pledge of Allegiance, God’s inclusion would not have been considered: How can the reference to God in the pledge be justified as a statement of our historical values?

Who specifically are among the millions offended by the phrase? For starters, we have Buddhist Americans. Each day, upwards of three million Buddhists are asked to stand for the Pledge of Allegiance and recite those simple 30 words. However, those words are inconsistent with Buddhist beliefs. The Buddhist faith does not prohibit reciting the pledge and many Buddhists express it. But, to assert that this country is under God negates the Buddha and the Bodhisattvas who serve as guides. Buddhists are no doubt just as patriotic as the rest of the population but the pledge, as amended, slights their spiritual beliefs.

We can’t forget Christians. While some agree with the phrase and believe removing it would be blasphemy, others disagree. As a Baptist minister stated regarding the phrase: “Giving lip service to God does not advance faith, it cheapens it ... Language that has the power to heal and mend should never be treated so callously.” If God’s name is sacred, why do millions of people who do not recognize Him recite His name every morning? If God’s name is sacred, why is the soiling of His name part of believers’ daily routine?

When children arrive on their very first day of school, and parents hover near the classroom door afraid to leave them, within moments they will be learning their ABCs, how to count to ten, and that our nation belongs to God. If little Susie were raised knowing only Buddha, could she comprehend as she proudly puts on her pretty new dress for her first school day that she would soon stand isolated from her classmates because of her spiritual beliefs?

Emily Thurston is an incoming sophomore at Templeton High School, who  believes that living with an open mind is the only path to success. Contact her via the editor at econnolly@newtimesslo.com.